Yukun Zhao, MAPP '10, was born and raised near Shanghai in China. He is the Founder and President of Huaren Applied Positive Psychology Institute (HAPPI), which is dedicated to promoting positive psychology and its applications in Chinese communities. He co-founded the Global Chinese Positive Psychology Association. He is also an acclaimed author of two books published in China. Full bio. Yukun's articles for Positive Psychology News Daily are here.

Author’s Note: This is the second article in my series of 24 stories of Chinese paragons, one for each VIA character strength. Even though the authors of Character Strengths and Virtues reviewed literature from major cultures around the whole world to select character strengths that reflect universal human values, the paragon stories in the book are predominantly Western. I hope this series can be a small supplement to the global picture of human strengths. See also my earlier story on a Chinese paragon of persistence.

In Character Strengths and Virtues, optimism is described as “Expecting the best in the future and working to achieve it; believing that a good future is something that can be brought about.” The paragon described in the book is the Optimist International club, whose creed includes the following points:

Widely considered the best writer, poet, drawer, and calligrapher of his time by his contemporaries, Su Dongpo was exiled to Lingnan, a remote and undeveloped place in the south corner of China, at the age of 57. While others complained about his situation, he was so content with the new environment that he composed poems to celebrate his new life:

“Were I to eat three hundred lychees each day
To become a Lingnan native I shan’t refuse”
[Lychee was only grown and available in South China at that time.] 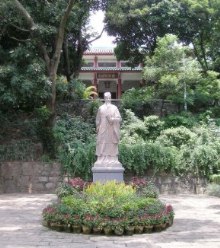 From Exile to Deeper Exile

His poems quickly spread to the whole country, including the capital. Zhang Dun was the Prime Minister and main force behind Su Dongpo’s exile. When he read these poems, he was dissatisfied, “Su Dongpo’s life in Lingnan is not bad, is it?” He immediately ordered Su Dongpo to be exiled to Hainan, an even more remote and savage area, an island half isolated from the mainland.

Su Dongpo was quite depressed by that order. He said “I lose my mind and spirits now.” The night before sailing, he didn’t sleep at all. He wrote in a letter that “There’s no chance of me returning alive, since I am exiled to the savage place at this old age.”

Life in Hainan turned out to be bad indeed. He wrote, “Here was no meat, no medicine, no houses, no friends, no coal for winter, and no cold spring for summer.”

Furthermore, Hainan couldn’t grow rice, which was the main food Su Dongpo was used to. The only way to get rice was to import it from the mainland. When the rice cruises were prohibited by weather, Su Dongpo had to eat sweet potatoes like the local people. Sometimes when even sweet potatoes were scarce, he had to rely on wild plants.

However, optimism recovered fast. Su Dongpo soon got used to the new life and started to like it. The note mentioned above in which he complained Hainan had nothing, actually ended with, “But there’s also one good thing – no epidemics either.”

One thing he must have truly liked about Hainan is that he made a lot of new friends in the local people. They were so uneducated and so isolated from mainland China that they didn’t know Su Dongpo’s fame. Therefore, Su Dongpo could walk easily among them, often with a big dog.

Su Dungpo would sit down under a palm tree and chat with them. He always asked others to tell stories, especially ghost stories. He was not boasting when he said “I can talk to everyone, from the gods to a beggar. There’s simply no one who is not good in my eyes.” 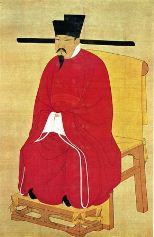 After all, this was not the first time Su Dongpo had been exiled. There were two major political groups in China at that time: reformists and conservatives. Su Dongpo belonged to neither. He bluntly criticized both parties at the same time, creating a lot of enemies. At the age of 46, he was charged by his reformist enemies that he was attacking the emperor implicitly in his poetry. The reformists collected all his poetry and pointed out the suspicious words to the emperor. Su Dongpo was arrested and the reformists asked the emperor to execute him.

It was optimism that saved Su Dongpo’s life. The emperor was not sure whether Su Dongpo was really attacking him. He sent an emissary to the jail to find out. The emissary went to Su Dongpo’s cell in the evening just as Su Dongpo was about to sleep. Not saying anything to Su Dongpo, the emissary simply put a box on the ground as pillow and lay down to sleep. Optimistic as always, Su Dongpo didn’t think much about it. He went to sleep and snored loudly. The stranger woke him around 2 am and congratulated him. When the confused Su Dongpo asked him what he meant, he simply said, “Don’t worry. Go on sleeping,” and left. It turned out that the emissary later reported to the emperor that Su Dongpo must have a clear conscience because he slept serenely in jail. The emperor therefore declined the execution requests from the reformists and only exiled Su Dongpo.

Our story has a good ending too. Six years after Su Dongpo’s second exile, Prime Minister Zhang Dun lost in the political struggle and was himself exiled by the new emperor to a place between Lingnan and Hainan. Su Dongpo was pardoned and called back to the capital. Zhang Dun’s son, worrying that Su Dongpo would become powerful and do unto Zhang Dun what Zhang Dun did unto him, wrote asking for forgiveness. And forgiveness he got. Su Dongpo replied “I’ve been a friend with your father for more than forty years. [Zhang Dun did defend Su Dongpo during his first exile.] Though there were slight misunderstandings, our friendship didn’t change…… Please don’t believe in the rumors about the political changes. I’ve seen much and experienced much. I would prefer to have a peaceful journey.”

This was a testimony to his own words, “There’s simply no one who is not good in my eyes.” That’s probably the true source of Su Dongpo’s optimism: he held a strong faith in humanity which made him always remain hopeful, despite all the ups and downs, hostilities, and struggles in his life.

Images: All from Wikipedia. Click on the images to find more information about them.

Yukun Zhao is the Founder and President of Huaren Applied Positive Psychology Institute (HAPPI), which is dedicated to promoting positive psychology and its applications in Chinese communities. He co-founded the Global Chinese Positive Psychology Association. He is also an acclaimed author of two books published in China.

Yukun, I love this series of articles you started. Absolutely love it. Thank you,

I very much appreciate this cultural perspective, but Sean (above), says it best. Thanks.