Sulynn, MAPP '06, lives with her daughter in Kuala Lumpur, Malaysia. She provides consulting and coaching services, leading her own company, Human Capital Perspectives. Sulynn is also the founder of the Asian Center for Applied Positive Psychology (ACAPP). Full bio. 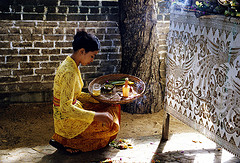 I propose the addition of Piety to the collection of character strengths. Piety reflects acceptance and recognition of social order through reverence, fidelity and devotion to parents, elders, teachers, mentors, homeland, God, or other higher order. It is unilateral love and kindness, more than respect, honor and duty. Piety is an ancient virtue that underlies civility, is found in both Chinese and Greek traditions, and plays an unseen part in virtually every human relationship. It is absolutely essential to a well-functioning society.

Piety transcends logical reason. It is an interpersonal strength that seeks to promote another’s welfare without concern for what is fair. Piety is altruistic behavior. It is propriety – knowing what is meet and right to do, and doing it without expectation of return. Piety springs from deep reverence and respect, and embodies an abiding devotion of oneself to another, in contrast to obligatory duty and service.

Take the case of Dave Pelzer who survived a traumatic childhood of unfathomable cruel abuse by his mother with his father standing by helplessly. Yet when Pelzer grew up after several foster homes and joining the Air Force, he sought reconciliation with his father and sat at the bedside of the dying cancer-stricken homeless alcoholic when the rest of the family was absent. His mother rejected his reconciliation, yet he forgave her and prayed for her release from torment. How is this possible? Pelzer felt that it was the right thing to do. Piety is what binds an adult child to a parent even in the absence of reciprocity. 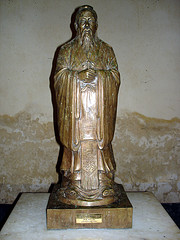 Confucius taught that filial piety is the foundation of the virtues of humanity: benevolence, righteousness, propriety, knowledge, and fidelity. Filial piety is an unquestioning commitment to cherish our parents and to prevent harm to them because ‘every hair and bit of skin on our bodies’ came from them. It also moves beyond the family to the service of the ruler. Filial piety is complete when our character glorifies our ancestors.

Confucius described the symbiotic Heaven-Earth pattern of constancy and righteousness, and told Man to perform the task of practical duty to maintain harmony. Filial piety means to act honorably and with self control rather than with a motive for personal gain. Man should aspire to be an example of virtue and righteousness to others, worthy of reverence, honor and emulation. However Confucius warns that piety cannot be blind; there should be remonstration when the conduct of our parent/teacher/leader is unrighteous, trusting that the bonds are strengthened rather than weakened as a result. 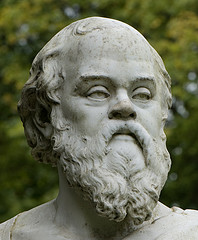 Piety to the State

Similarly, Socrates believed that one should never do wrong nor disobey the state, arguing that state piety is a requirement although obedience to parents may be a temporary obligation. So strong was his commitment to truth and morality, that when he was imprisoned, he did not speak against the state even at the cost of his own life.

Religious piety refers to the observance and practice of spiritual disciplines such as prayer and meditation as well as all manner of religious protocol peculiar to that faith. It calls for walking the talk. This is true across all faiths and in the secular world of discipleship to alternative spiritual gurus.

Piety is also marked by abiding devotion – an ardent often selfless affection and dedication – to a person or a principle. There is no need for reciprocity as our acts of devotion are sufficient to themselves. In Chinese and most Eastern folklore, those who exhibit filial piety are more than heroes, they are the epitomes of virtue. To get an insight into acts of filial piety, read the 24 paragons of filial piety.

I can argue that Piety meets each one of the 10 criteria for character strengths, but will focus here on just a few of the criteria.

Flial piety is highly revered and honored in China, India and across most of Asia and other collectivist cultures. The Ten Commandments places ‘honor thy father and mother’ right after honoring God.

Filial piety is trait-like to Eastern cultures, while religious piety distinguishes practicing believers from lip-service practitioners worldwide. State piety is akin to citizenship in terms of devotion being manifested as loyalty and duty. In Eastern and perhaps collectivist Western communities, family traditions and customs ensure that piety is inextricably ingrained in the moral fiber of members of the clan. Like all virtues, piety grows in us through being used.

Reverence in piety is unconditional and does not have to be earned. We do not revere a parent or a leader or deity because they are deserving; but because their place and ours in the social order is a fact. Piety is not duty although it resembles citizenship and responsibility. It is unwavering care and attention to the well-being and preservation of the object simply because it is a natural obligation.

A sterling example of a paragon of piety, both filial and state, is found in the heroine of a famous Chinese poem written during the Northern Dynasties (AD 420-589). A beautiful young woman, Hua Mulan, disguised herself as a male soldier in the Chinese Army for 12 years in order to spare her aged frail father from being drafted into fighting the war and to preserve her family’s honor. (For an animated vignette, see Disney’s Mulan.

We also know the legend of little Hans Brinker (8) who, fearing the dangers of a leak in a dike to his little town, was up all night with his finger stuck into a hole in a dike to prevent water from trickling out thus saving Haarlem from flooding. Hans depicted the spirit of the whole country of Holland, symbolically declaring that a million fingers are ready to stop any leak in its politics, honor, or public safety – a fine example of state piety.

Confucius warned that when the symbiotic universal pattern of our world is not matched by conscious practical actions which perpetuate harmony and benevolence, anarchy will prevail. I am of the view that when we forget where we came from, where we are going loses its pleasure, meaning and purpose.

Sulynn is a positive change consultant and coach working with organizations to energize their workforce for outstanding performance. She designs and implements strength-based programs that facilitate building positive workplaces, and conducts in-house individual and group coaching sessions and workshops that focus on enabling leaders and managers to fully engage in their roles, thus enhancing both corporate results and individual well-being. Combining practical corporate experience with evidence-based research in positive psychology, Sulynn assists CEOs in evaluating their organisations’ existing and proposed change initiatives for coherence, congruence, relevance and positive impact through strategic road-mapping. She is driven by her passion for developing human potential and promoting human flourishing particularly in harnessing individual character strengths, personality and energy for organizational robustness and success. Her personal core values are integrity, commitment, honor and fun.

Yes, I Stand by My Words, “Happiness Equals Love—Full Stop”

Sulynn – what a beautiful piece to start my day! I love the notion of piety in the “absence of reciprocity” and that grows, like a muscle, by “being used”. I think the opposite of piety is the all too familiar “What’s in it for me?” Thank you for writing such a thoughtful piece.

Last night we celebrated Dad’s 88th b-day with a little picnic here at the house. I’m reminded of how you connected with him on several occassions when you were here in the states, treating him like you would your own father. You are a paragon of piety! Much love, Margaret

Sulynn,
Your writing about filial piety has made me think of me and several of my friends who are struggling to figure out just the right way to help parents in their 80’s. There are many differences, but finding what honors the elder seems to be a common thread. One of my friends, for example, has decided that she doesn’t need to correct her mother when she refers to people long-dead as if they were still alive.

As for reciprocity, I know in my own mind there’s a background thread that I’m modeling for my own kids what I hope they will do for me when my time comes. So it isn’t a direct return and I expect I’d behave the same way even if I didn’t have children. But it’s not that different from the time my grandmother babysat for the three of us preschoolers for a weekend. When my mother asked, “What can I do to repay you?” my grandmother responded, “Do it for your own children some day.”

A wonderful contribution to the strengths. The idea of it being a strength made me think of this quote from author Ralph Waldo Emerson:
“Every thought which genius and piety throw into the world alters the world.”

Kathryn – I like your grandmothers response… I plan to use it myself. Thanks!

Madje, I believe that we all have genius and piety within 🙂 and it just takes awareness and purpose. Adding it as a strength would help in that sense. Then we can all alter the world in our own ways.

Margaret, how fun to have a picnic with your Dad! He’s such a lovely man. I have such wonderful memories of being with your family. Kathryn,EJ asks me the same Q and I give her your grandmother’s response too. Her Chinese name means ‘awareness of piety’ and she’s learning well 🙂

Hi All,
This piece on piety is very interesting – especially in that it allows challenges to injustice and abuses, but I think it is a mix of compassion and humility in essence – I mean these words in the end all overlap rather a lot, don’t they? And I think that it is useful to consider these ideas but not get stuck on making too many lists of words and what they mean and instead find ways of behaving them – being them – thus turning from mere intellectual debate on their respective merits and living it organically within ourselves – which can prove a great deal more challenging!
I do love these discussions though – what does that say about me ?!

Thank you for this wonderful piece of true beauty!
I am currently enrolled in Positive Psychology at North Carolina State University. The class was given assignment to choose an article and ask a question about the article to the author, wait for their response then then write a short paper on our question and the author’s answer. My question would be: What is the difference in obedience and piety? I know obedience is an action that can be done because of duty or performance that might not always come from the heart. Is their any news that shows piety could be considered one of the 24 characters? As a whole are more people upholding piety more or less than generations before?