Home All Resilience as a Life Skill
AllHome and FamilyHopeParenting & SchoolsResilienceStress

Resilience as a Life Skill

I’ve recently become aware of a question that’s important to many of my coaching clients: “What are the skills for resilience I can use throughout my life?” I’ve been thinking about this in the context of this week’s cover story for The Atlantic’s July issue, What Makes Us Happy? by Joshua Wolf Shenk.  The story highlights George Vaillant’s longitudinal study of adults.

In my work with children and families, people often tell me their secrets. This is the story of someone who knew nothing about positive psychology but who transformed a life of risk-factors into a life of success by using empirically sound approaches to living a flourishing life.

Timothy was born into a family of ten children, at the beginning of the Great Depression. His mother had been married three times; his parents were both alcoholics. Their family occupied a series of apartments in the poorest neighborhoods of Newark, NJ. From vacant lots, the children collected milkweed stems that their mother boiled into a broth for their dinner. They regularly heard that they would never amount to anything.

Beatings and other abuse were part of Timothy’s everyday life, and while he attended school, he was not considered a good student by any means. He learned to keep secrets about his life, and developed great skill at listening to and observing people. When he was 15, Timothy left home and never returned. He connected with a charity organization where a kindly man became a caring adult in his life. Timothy eventually graduated high school in a distant city. When his family did come looking for him, it was much, much later, and they were not coming to invite him home; they wanted money. 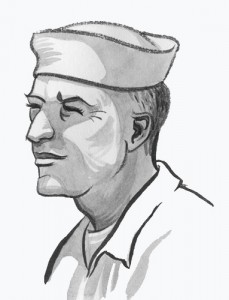 While still in high school, Timothy went to work in a leather-tanning factory where he found the long hours a great diversion from angry thoughts about the family he had left behind, the nine siblings he expected—and hoped—he would never see again.  When still underaged, he enlisted in the Navy where he was guaranteed a berth, consistent rules and expectations, and three square meals a day.Timothy met his future wife hitchhiking while on leave, and they eloped on their way to beginning a 52-year marriage. The Navy was Timothy’s permanent address for years. His work there, during nearly 30 years and in several countries, remains classified, as he kept secret the work he did behind the closed doors of highest level security clearance. Timothy, his wife, and their four children all graduated from college, and two of them even earned master’s degrees.

In his fifties, Timothy was diagnosed with incurable cancer and underwent an extreme operation and experimental treatments in hopes of prolonging his life for up to two years. He lived on for 19 years, despite each follow-up test being positive for spreading cancer, to see his eight grandchildren join the family, and to see the eldest one graduate from high school. For more than 15 years, he was also a Sunday school superintendent and youth group leader, and he mentored future military officers. These things he did even when living out of the country. When he retired from the military, Timothy even had two more successful careers ahead of him.

Timothy died a few days before his 77th birthday, having beaten the odds that he would be a failure in numerous quarters of his life, and that he would die in his prime. (This is him on the slide, with one of his grandkids.) Instead, he passed away quietly with his family close by, in his multimillion-dollar home, with no mortgage. He had paid for this himself.  Hundreds of mourners at his funeral—many of them who had been children and young adults he mentored—recalled  Timothy’s quiet strength, steadfast faith, and steady moral compass. He kept the secret of his childhood from nearly all of them, and they would never have guessed.

Resilience Skills for a Lifetime

Timothy (not his real name) was a real person. Early on he had the presence of mind to leave his family and turn his life in a different way. Two longitudinal resilience studies indicate important reasons why Timothy may have been successful in his bid for a flourishing life. The first, by Emily Werner and Ruth Smith, looked at a cohort of nearly 700 male and female individuals across their age-span from perinatal to age 40. It was conducted on the island of Kauai, Hawaii. The second, conducted by George Vaillant, followed more than 450 men from poor, high crime neighborhoods in Boston, MA and more than 260 Harvard men, for more than 50 years.

Here are some of the important findings of both these studies that predict resilience and recovery from high-risk childhood, and success as adults:

1)      Resilient siblings of dysfunctional families withdraw from family members enmeshed in problems. In this case, only Timothy escaped the patterns which led seven other siblings (two others died in childhood) to repeat the troubled lives of the parents.

2)      Resilient people have a caring adult in their lives. This person does not have to be related to the young person. Timothy accepted charity and met a trustworthy, caring adult.

3)      Resilient people develop and value personal competence and determination. In fact, this is considered one of their most effective resources by resilient adults looking back to their at-risk childhood. Timothy made a plan to leave and did not look back.

4)      Resilient people show a strong capacity to work, even in childhood. This is a strong predictor of career success and out-predicts the negatives of poverty or a multi-problem family. Capacity to work also predicts satisfying interpersonal relationships and good mental health in adulthood. Timothy was never without work from the time he was 15 years old.

5)      Resilient people set goals for their adult life, even when they are children. They focus on career or job success, self-development and self-fulfillment. They strive for a happy marriage to a spouse who is a source of support and with whom they will have children, and aspire to owning a home. Timothy and his wife were married for 52 years, and owned several homes of increasing value during this time.

6)      Resilient people set high expectations for their children. These include school achievement, higher education attainment, happy families of their own, and the clear expectation that they will do things the right way, not the easy way. All of Timothy’s children were expected to perform well in school, acquire a post-secondary education, and marry and have families, which they did, happily.

7)      Resilient people believe that failures will happen, but that you can always try again. Note that in the language of explanatory style, resilient people are not optimists—they don’t expect good things—but they do have high self-efficacy and take a long view when bad things do occur. That long view may have resulted in Timothy’s 52-year marriage and 19-year cancer survival.

8)      Resilient people are active in community service. Timothy gave back for years and years to support youth and young adults in areas that mattered deeply to him—the military and the church.In George Vaillant’s model of adult development, Timothy successfully negotiated the “six sequential tasks.” These are:

Each of these broad categories is likely supported by applications we know and love in the positive psychology toolbox, such as good decision-making, building of habits, goal-setting, grit, deliberate practice, active constructive responding, learning your ABC’s, a strong social circle, a connection to something larger than oneself, and the like.

Perhaps the most important lesson from Timothy’s life is that we are not doomed from birth to live out lives of failure. Quality longitudinal research shows us that by middle age, most people, regardless of their beginnings in life, have “turned out.”

Chapter 9 in the PPND book, Resilience: How to Navigate Life’s Curves, is based on this article.

That’s a great story, Sherri! Loved reading it! Also loved your top 8 factors of resilience – it’s time we go beyond CBT and integrate a few additional and important tools to our “positive psychology toolbox” and your suggestions do it very well! Thanks for this contribution!
Warmly,
MarieJ

Hi, Marie-Jo,
I agree that there is more to Resilience than having more accurate thoughts, since you need to set goals, make good choices, have good habits, etc., or you may end up doing the same thing but expecting different results. That does not lead to better outcomes.

I had never read the books (the Werner/Smith and Vaillant ones) side by side before this, though I read both in MAPP. The 8 common factors are retrospective, but worth considering when working with clients who are moving forward!
🙂 Sherri

The six sequential tasks of adult development was a great one to put in here and list how Timothy met those tasks. I’m glad you were able to tie the Atlantic story in with this.

Sherri, you – like George – write about the science in the context of the people. I think it’s so telling about Timothy how you outlined him and then summarized the resilience points that he and others like him must use to get farther. Thank you much,
S.