What do you say to yourself? 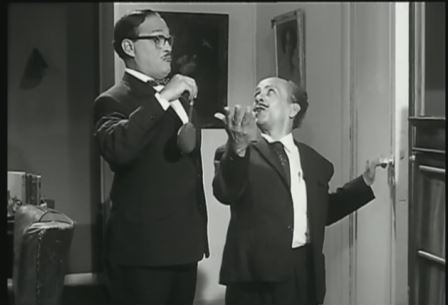 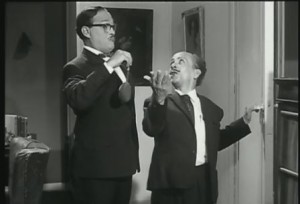 From the 1968 movie, Amatory Chase

In a classic Egyptian comedy movie, a patient tells his psychologist that he feels bad because he is too short. The therapist advises him to repeat to himself, “I’m not absurdly short; I’m ridiculously tall!” and everything will be fine!

Some people mock the idea of positive affirmations and consider them some kind of self-deception or delusion. Meanwhile, it is commonly suggested in pop psychology and spiritual books to use self-affirmations to raise confidence, considering that “as a man thinketh in his heart, so is he.”

Self-talk is what people say to themselves either out loud or as a small voice inside their head. So has it been scientifically proven that positive self-talk can make any difference at all?

According psychological studies and experiments, do self-affirmations really work? 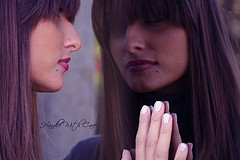 In a recent study that investigated the effect of self-talk, researchers chose a self-affirmation statement suggested by a self-development book: “I’m a lovable person.” Then they asked participants to repeat this statement to see how it affected their self-esteem.

Surprisingly, the researchers found that people with high self-esteem felt better when they did this, while people with low self-esteem did not; in fact, they actually felt worse!

Can’t we use positive self-talk to help us when we feel down? 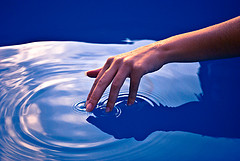 Looking in a mirror

Other researchers performed a different experiment. They let the participants write down the most common thoughts that cross their minds during the day and then use the most positive and believable thought as a self-affirmation to rehearse more often.

This experiment resulted in an obvious increase in the participants’ self-esteem, even in people with low self-esteem.

Why did this happen?

By comparing this experiment to the first one, we can infer that the key point is to use a self-affirmation that comes from a person’s own thoughts, not a random mantra advised by a self-help guru that may not fit people’s beliefs about themselves. Repeating a self-affirmation that doesn’t feel right can make someone feel worse.

How to self-talk positively?

It is possible to train people to increase positive thoughts, which has many benefits. It is important for mental health and has been shown to enhance performance for athletes in many sports, such as tennis, water polo, and basketball. It can also be useful in business, enhancing organizational performance if employees practice it often. 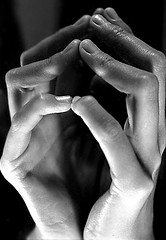 If you think about it, positive self-talk is easy to do; just close your eyes, and talk to yourself in a positive way. However, researchers have designed many techniques to increase the frequency of effective positive self-talk. Examples include

These experiments also show that recalling realistic and believable positive statements prewritten on flash cards (or cell phone applications to be available any time) can be useful as reminders to increase the frequency of positive thoughts.

So it seems the self-affirmations should be derived from the thoughts people already have about their own qualities and characteristics. Personally, I use my character strengths as an inspiration to write my own self-affirmations, so they will match what I really believe about myself.

On the other hand, it may not be useful to repeat a random mantra taken from a self-help book, because this may contradict what people believe about themselves. Doing so may be harmful for people with low self-esteem because they may feel the statement is not realistic, like the patient who keeps saying, “I’m not absurdly short; I’m ridiculously tall!”

Hatzigeorgiadis, A., THEODORAKIS, Y., & Zourbanos, N. (2004). Self-talk in the swimming pool: The effects of self-talk on thought content and performance on water-polo tasks. Journal of Applied Sport Psychology, 16(2), 138-150.? Abstract.

Hatzigeorgiadis, A. (2006) Instructional and motivational self-talk: An investigation on perceived self-talk functions. Hellenic Journal of Psychology, 3, 164-175.

.-. Handle with care .-.
Looking in the mirror courtesy of aguscr
Touch courtesy of Katie Tegtmeyer

Give and Take (Book Review)

A Good Boss or A Good Doctor: Which Matters More?

Interesting article and very beneficial! This is what I love about the study of positive psychology, that it takes pop psychology theory or generalizations and applies some investigation to see which ones are valid, and which simply aren’t. Feels much better acting on, and recommending, steps for personal growth when we know there’s a good chance they’re valid. Well done!

Great positivee psychology application based on authenticity and the context of your own life.

I use post-it notes in a note book and scattered other places to remind me when life gives me challenging opportunities requiring flexible reappraisal.

Love the application to business, too.

Sherif – all sounds like the secret (the book) to me. Just sit back and have happy thoughts and all will be well. I thought positive psychology had evolved beyond this?

Hi Judy,
You are right. Post-it note can be helpful as reminders of our qualities and goals. For me, I use pictures that I consider inspiring as well!
Thanks for passing by,

Dear Mike,
That’s what I love about Positive Psychology as well. I’m glad you like the article.
Thanks for passing by,
Sherif

Dear Oz,
This is an interesting comment. But on the contrary, the article contradicts the book you mentioned in many ways.
First, it investigates the effect of positive self-talk on restoring self esteem, not on sending positive energy to the universe to attract positive events and circumstances! this is completely different.
Second, the article clearly states that self affirmations suggested in self-help books can be harmful.
Third, the article discusses positive affirmations in specific, not mental simulation or visualization.
Forth, every claim in the article is supported by scientific experiments and studies mentioned as references, unlike the book you mentioned.

Thanks for passing by,
Sherif

Thanks, Sherif. Pictures AND photos, a win win!

Thanks, Sherif. Pictures AND post-its, a win win!

This is indeed the role of positive psychology to take these ideas of positive thinking that may be very popular and test them to understand better how, when and why they work. Thanks Sherif!

Self-talk is what people say to themselves either out loud or as a small voice inside their head. So has it been scientifically proven that positive self-talk can make any difference at all?

They has been a ton of research in DBT, CBT and ACT therapies, and many others, Freida. So much depends on what to say to yourself and your observation of what you way that is critical. You acknowledge your inner critic, make room for it, be curious about it and flexible with yourself about it. You don’t need to try to get rid of it, but use self-compassion, be committed to your value driven action while reminding yourself aobut your goals and where you are going.