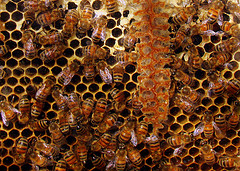 Shannon Polly, MAPP '09, is a facilitator, speaker and coach in Washington, D.C. and the founder of a boutique consulting firm, Shannon Polly and Associates, where she applies positive psychology to leadership development. She also co-founded Positive Business DC (@positivebizdc) and she has facilitated resilience training for the U.S. Army. Full bio. Shannon's solo articles are here, her articles with Louisa Jewell here, and her articles with Genna Douglass here. 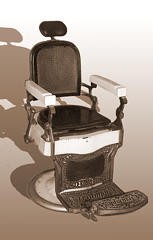 It was dark in the theater. The crowd was hushed waiting for the big reveal. The musical was Sweeney Todd, and my college audience had heard from their friends about what happens when the first victim gets the ax (or in this case, the razor). The seat and foot on the trick chair drop, and the actor falls through the roof of the second floor set to the crash pad below.

I had the good fortune to play Mrs. Lovett, and I had also sourced the barber’s chair for this production. At the time, I was backstage waiting for an entrance. I heard the moment in the music, and then I heard screams. Just like we rehearsed.

But these weren’t the screams of an actor playing a character who was just killed. These were real screams. The chair had failed, and the actor was bloodied. It was chaos, there was fog on the stage so no one could really see what was going on, the orchestra didn’t know what had happened so they kept playing, and the actor who had bloodied shins and a possibly broken nose was trying to live by the “Show must go on” rule. He kept singing and moving to his next entrance.

The other actors, technicians, and musicians knew this was the one exception to the rule. The stage manager stopped the show and went into action. Everyone involved with the production was on high alert. It was a wonderful example of teamwork as a group strength, and also teamwork as an individual strength. Each person abandoned his or her ego for what the production needed at that moment. The tech people filled in for each other’s duties while the actor was taken to the hospital. The orchestra was waiting poised for their instructions. Even a doctor in the audience offered to come back stage to give medical help.

If you’ve ever been in an artistic production you know that there can be many egos involved. But you also know that the best experiences for both actor and audience occur when people set status aside and do what must be done for the good of the production. 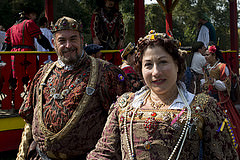 Somebody made the costumes…

What is the Character Strength called Teamwork?

In Character Strengths and Virtues, Peterson and Seligman define the character strength of teamwork (with related synonyms of citizenship, social responsibility, loyalty) as

In the circumplex model of character strengths that Peterson describes in his primer, teamwork is a heart based strength (as opposed to head) focused on others (as opposed to self).

When using the word teamwork, people frequently fail to differentiate between concept of high performing teams and what it means to have the individual signature strength of teamwork. The Sweeney Todd example shows both, but sometimes it is difficult to even identify it as a strength.

I was coaching a new manager in a governmental organization, and we were at a bit of an impasse. She described a crushing workload and an unbelievable work ethic (not the common perception of government employees) that led her to working nights and weekends, often until early in the morning. She was balancing being a new manager, her previous work duties, and going back to graduate school. We spent a few sessions probing around values and discussing the benefit of self-care. 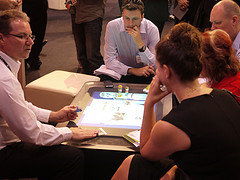 See your place in the big picture

The light bulb didn’t go off for her until we looked at her VIA strengths and realized that teamwork was a top strength. Doing her share was a top value. She put it above her own well-being.

What ended up working for her was exploring the concept of a shadow side of the strength. After she could see her strength clearly and the signs of overuse, she was able to adjust her behavior to avoid burnout. Then she could see that delegating work actually served her team.

How do you spot someone with a top strength of teamwork? Watch for someone with the ability to identify with team goals and sometimes put them ahead of personal gratification, just as my client did. It involves being able to see the big picture as well as one’s place in it.

Today I’d like to discuss one way to build teamwork as a character strength. Come back tomorrow or three more ways that build this strength in yourself and those you lead, thus enhancing the teams in which you participate.

Performance of a Lifetime is an organization in New York City that uses improv to teach skills of listening, teamwork, and collaboration. In his recent book To Sell is Human, Dan Pink describes some of their work. One exercise is called Predator/Protector. Each person picks two people in the room, one her protector, one her predator. Then all try to place their protectors between themselves and their predators. What results is usually a flurry of running around the room, people bumping into one another and furiously trying to save themselves from this imaginary threat.

Teamwork in the hive

Then the facilitator stops the group and asks the participants to start again and pay attention to how the group is doing. On a second try, all of a sudden, the movement slows down and finally comes to a stop when people take into account the rest of the group and ultimately achieve their goal.

If we are paying attention to how the group is doing, we are letting go of ego, disregarding status and building a better team. David Sloan Wilson has shown that oftentimes people put the ‘we’ before the ‘I’ even though it may be economically irrational to do so.

As NYU professor, Jonathan Haidt, and colleagues say, “We are hive creatures.” During your next team meeting take a director moment. Stop and view the meeting from the balcony and ask yourself, “How is the group doing?” You might ask the team directly to disregard rank or position and ask them to comment on what they see going on in the room.

Come back tomorrow for three more ways to build teamwork as a character strength in yourself and others.

Pink, D. (2013). To Sell Is Human: The Surprising Truth About Moving Others. Riverhead Trade.

VIA Institute on Character. Teamwork as a top character strength.

Shannon is a facilitator and coach in Washington, D.C. and founder of Shannon Polly & Associates (www.shannonpolly.com). She applies positive psychology to leadership development. She has been an assistant instructor in the MAPP program at the University of Pennsylvania; is a contributor to the book, Positive Psychology at Work, The European Handbook of Positive Psychology, conducts appreciative inquiry summits across the country and has been a facilitator for the Master Resiliency Training (MRT) program for the U.S. Army. She has also written PPND articles with Louisa-Jewell and with Genna Douglass.

Most teams work this way: I make great team player as long as I’m in charge. Most teams don’t work because everyone wants to be in charge or there is one dominant person who comes in and ruins everything because they will not listen to others who may have great input. The only way a team can work his to get all of the narcissists off the team.