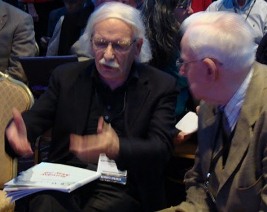 Shannon Polly, MAPP '09, is a corporate communications trainer, facilitator, and coach in Washington, D.C. and the founder of a boutique consulting firm, Shannon Polly & Associates, where she applies positive psychology to leadership development. Shannon created workshops on Positive Management and Change Management, and she has facilitated resilience training for the U.S. Army. Full bio. Shannon's solo articles are here and her articles with Louisa Jewell are here.

Articles written by Shannon and Genevieve together are here.

The 23rd Annual American Psychological Science convention took place May 25-29th in Washington, DC. The theme was Convergence: Connecting Levels of Analysis in Psychological Science. Over 3,500 attendees spent their Memorial Day weekend learning about new developments in Psychological Science. In her introductory remarks, the President of the APS Mahzarin Banaji said that she attended the first conference 23 years ago when it included wine and cheese in a parking lot. Now they convened over 3,500 attendees in the largest ballroom in Washington, DC. This is part 1 of 2 of the conference report. Part 2 will appear tomorrow.

Dr. Giacomo Rizzolatti presented the keynote address, the first time a neuroscientist has been asked to present the keynote for the APS Convention.

Rizzolatti’s mirror mechanism discoveries show that each time an individual observes an action done by another, a set of neurons that code that act light up in the brain. If you see someone kick a ball or if you read the word ‘kick’ the same neurons fire in your brain as if you were the one kicking the ball. Rizzolatti first discovered this phenomenon with monkeys and then began to study it in humans. The parieto-frontal mirror mechanism is, however, the only mechanism that allows a person to understand others’ actions from the inside, giving the observing individual a first-person grasp of other individuals’ motor goals and intentions. He presented new data that motor neurons do not just code any act of movement. The motor act that is coded for monkeys is one that has a goal. In fact, in the brain it is the goal that is coded, not the movement itself.

His research shows that the mirror mechanism is true not just for actions (i.e. kicking a ball) but for emotions as well. You can find an enlightening article about Rizzolatti’s research and how it relates to bullying here. For another article about bullying see Louisa Jewell’s earlier PPND article here, and one by Catherine Mattice here.

One of the most compelling parts of Dr. Rizzolati’s talk was his research with children. Typically developing children had motor neurons that were able to code the intention of the action they were seeing. However, his research showed that children with autism were unable to perceive the intention of an action. In the study when the researchers caressed the subject or gave them something in a kind way, autistic children were unable to interpret the emotion behind the action. In his words, autistic children had “broken motor neurons. What is true for them is a deficiency of the motor system.” However, he notes, that even when someone is highly intelligent it is difficult to interpret others’ intentions. Rizzolatti noted that further research was needed.

James W. Pennebaker of the University of Texas at Austin, best known for his research on the health benefits of writing about emotional experiences, was an invited speaker. In an early experiment, Pennebaker had people write either about the most traumatic event of their life for four days or about a superficial topic. He found that the people writing about the traumatic event tended to have better physical and mental health outcomes relative to a control group.

In his talk, What Our Words Say About Us, he discussed some of the most important findings of his career, as well as new directions.

After finding that writing about traumatic events led to health benefits for many people, he wondered why it didn’t work for everyone and he began to look at why. He created a computer program to analyze word content, and found that people who benefited used more positive emotions words (e.g, “grateful) and more cognitive words (e.g., “realize,” “understand”). But, more surprisingly, he discovered differences in pronoun use. Specifically, he found that people who changed from using “I,””me,” and “my” to using other pronouns from the first day to the last day, experienced improved health. He summed this up by noting that people who changed their story over time improved, whereas people who came in with a pre-constructed story did not improve.

Pennebaker made the point that pronouns are markers of where people are putting their attention. For example, when people say “I,” their attention briefly flips to themselves. He continued his research, focusing in on differences in pronouns and other functional words, which he says make up about 55% of the words we hear.

Dr. Pennebaker’s new book, The Secret Life of Pronoun, will be released in August.

Thanks to Shannon Polly for the pictures of Dr. Rizzolatti
Soccer triptych courtesy of Zach Stern

Shannon Polly is a corporate communications trainer, facilitator, and coach in Washington, D.C. and the founder of a boutique consulting firm, where she applies positive psychology to leadership development. Shannon created workshops on Positive Management and Change Management, and she has facilitated resilience training for the U.S. Army. Shannon also has solo articles here and articles with Louisa Jewell here. Genevieve Douglass consults on organizational behavior topics including motivation, goal-setting, information sharing, and well-being. She also works on research at Columbia and Fordham Universities, studying how people find and develop callings, experience stress in negotiation, and regulate their attention and emotions. Genna's solo articles are here.

APS Part 2: Goals, Perceptions, and a Challenge to Broaden and Build