MAPP Magazine: The Civic Engagement Issue
MAPP Magazine: The Education Issue
Unthinking, Fast and Slow
Sit Write Share launches today
MAPP Magazine: The Power of Community
The Art of Insubordination: A Review
On Doing What We KNOW is Good for...
MAPP Magazine Articles on Positive Psychology Applications
August 31 is Launch Day for The Business...
New MAPP Magazine on Positive Humanities
Home All 3 Reasons to be Inspired by Nick Vujicic, a Man with No Arms and Legs
AllConferencesGratitudeKindnessLovePositive Emotion

3 Reasons to be Inspired by Nick Vujicic, a Man with No Arms and Legs 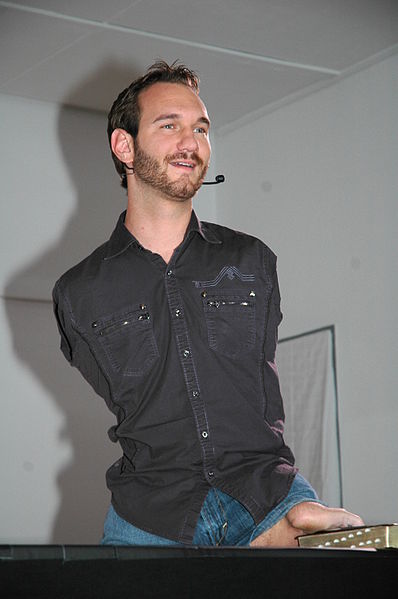 Sha-En Yeo, MAPP 2011, is the founder of Positive Education. An educator with 10 years of experience, Sha-En is passionate about education, parenting, and facilitating the creation of flourishing school communities. Through workshops such as the one described in her MAPP capstone, she hopes to empower and inspire schools to begin a process of positive transformation, one individual at a time. Full bio pending. Sha-En's articles are here. See also Amanda Horne's article about Sha-En's positive education work. 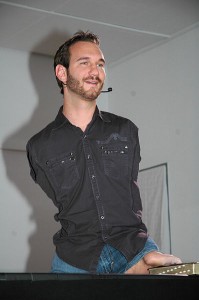 Nick Vujicic walks on stage, facing a crowd of 5000 people who have set aside their Saturday night just to hear him speak. He is awkward, no taller than a 3-year-old but when he is finished speaking, I have doubled over with laughter, teared at his compassion for others, and been wowed by his authenticity.

Nick Vujicic was born with phocamelia, a rare congenital condition that involves malformation of the limbs. With only a tiny little foot, he has defied the odds by becoming a motivational speaker, as well as getting married and becoming a new father to baby Kiyoshi. How has all this been possible? I sit enraptured as Nick unveils stories that capture key moments in his life.

As I observe him hobble on the platform set up on stage, I take a good hard look at myself. Here are 3 reasons why I am inspired by what he stands for and believes in.

Nick begins his talk emphatically with an oft-heard line: “You are beautiful just the way you are.” He shares how he used to be taunted by bullies, “You’ll never make it,” or “You are destined for a life of loneliness because no one will ever love you.” He allowed them to determine his worth. He even contemplated killing himself by drowning in a tub.

Determined to move away from these lies, he focused his energy on believing in his own worth and self-love. He willed himself to move away from experiencing shame to allowing vulnerability, yet cultivating resilience to others’ words. This vulnerability is what Brene Brown defines as “being honest with how we feel, about our fears, about what we need and then asking for what we need.” Instead of being driven by fear and weakness, vulnerability means being driven by courage to be one’s authentic self.

In pushing to love and be himself, Nick chose what Brown terms wholeheartedness, choosing to engage in the world and with the world from a place of worthiness. Nick chooses to believe that he is not defined by what others see or the work that he has done. Instead, he makes choices that stem from knowing what is important to him: family, self-compassion, and love.

Born with no arms and legs, he is extremely thankful for a little foot (or chicken drumstick as he affectionately terms it) that enables him to brush his teeth, drive a car, type on a computer and much more.

With what he has, he has managed to live an independent life, write 4 books, and bring inspiration to others.
He explains that spending life comparing oneself to others who are better, richer, more beautiful is bound to breed discontent. For example, if he constantly wished to have limbs, he would have no mental space to consider new ideas to leverage his chicken drumstick to reach his full potential.

The role of gratitude on living a full life is not new. In his research, Robert Emmons has found that being grateful has significant physical, psychological and social benefits. People who practice gratitude often report better immune systems, better sleep, and more positivity. They also feel less lonely, less isolated and more generous.

For Nick, being grateful means focusing on what he has, what Emmons calls an affirmation of goodness: there are good things in the world, and we have received some of them. It also provides a means for Nick to figure out where that goodness is coming from, in Emmons’ words, “recognizing a humble dependence on others.” Nick credits his parents for treating him as a normal child, his wife Kanae for unwavering love, and God for giving him this life to inspire others.

3. He exemplifies goodness in human beings

After Nick is done with his speech, he is joined on stage by two Singaporeans. The first is Aishah Samad, a 41-year old ex-Singapore national shooter who contracted a severe bacterial infection in July 2012 which eventually led to the amputation of her arms and legs. The second is Jason Chee, a Navy serviceman who lost both his legs and his left arm in a shipboard accident in December 2012. 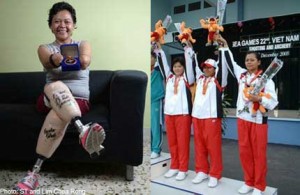 Nick demonstrates extreme humility and empathy by sharing that he has had it lucky because he was born with no arms and legs. Coping for him means figuring out how to manage without something he never had, Coping for them is learning to do without what they have always known, a significantly tougher job. In this moment, he puts them, their feelings, and their plight above his.

As CEO of non-profit company Life Without Limbs, driven by a firm belief in God, Nick hopes to inspire others that hope prevails despite challenges and obstacles in life if one can still find the strength to overcome them. In this spirit, he shares his plans to set up a training academy to train speakers to share this message, and extends this opportunity to both Aishah and Jason.

Researcher Stephen Post suggests there is a strong positive correlation between altruism (or helping others) and well-being, health, and longevity. In a recent study by UnitedHealthcare and VolunteerMatch, of 4582 American adults, 89 percent responded that helping has improved [their] sense of well-being and 78 percent reported that it helps recovery from loss and disappointment. In setting up Life Without Limbs, Nick reaches out beyond himself, supporting love and hope in others.

Post, S. G. (2011). The Hidden Gifts of Helping: How the Power of Giving, Compassion, and Hope Can Get Us Through Hard Times. San Francisco: Jossey-Bass.

Taking Steps toward Goals: What Does Research Tell Us?

Nick Vujicic’s story is truly moving and at the same time very inspirational too. He also engages with the audience in a very simple, humorous manner. He truly is great.

Thank you for all inspiration ..

Excellent article. I’m dealing with many of these issues aas well..

How could any of us feel unloved, lonely, or just plain useless, you Nick are an inspiration for all who feel less than, nothing is impossible in this world we’re just passing through, thank you sir for sharing your achievement you have accomplished, you are my hero!