I have always been drawn to the quote by Friedrich Nietzsche that “Freedom is to struggle with no hope for reward.” There a great deal of courage in that line. There is comfort in the notion that something can us keep us going, even when the circumstances seem insurmountable. As I have maneuvered the various bumps and tight spots that invariably arise in life, I have often recalled that mantra to fuel the sort of “real time resilience” described by Reivich and Shatte (2002). But is Nietzsche really describing what is going on when we act with courageous persistence? Or is the line’s existential heroism just poetic hyperbole?

I have done many things in my career as a lawyer. By far the most rewarding has been when I assisted people fleeing torture in their homeland. Hope is certainly central to each case. For example, I may hope to convince the asylum officer that my client was tortured because of his ethnicity, and not just to extract money from him. If I can, I can assure that he will not be sent back to the people trying to kill him. However, while these victories ARE victories, at times I feel like a wide-eyed tourist quietly pressing coins into the palm of a starving child. The relief is singular and temporal. But when I lift my gaze from that child’s eyes I find that I am at the center of a mob of hungry children: each one desperate; each one in need. And despite my struggling for one person here or there, I become conscious of a human suffering that washes out in every direction beyond a comprehensible horizon. What can one person do? Can we sustain the “struggle with no hope for reward”? Maybe, for a little while. But most of us need something to keep us going.

Nietzsche’s line offers a heroic vision. However, as much as I am drawn to it, it distracts from the true fount of sustainable effort. Individuals experience hope when they have an expectation that a desired goal can be achieved (Snyder, Rand, & Sigmon, 2002). It requires 1) goals we wish to attain, 2) beliefs about how to attain those goals (“pathway thoughts”) and 3) a belief in our ability to successfully follow the chosen pathway (“agency thoughts”) (Snyder, Rand, & Sigmon, 2002).

It is easy to feel a paralyzing hopelessness in the shadow of epic traumas: A nation torturing its citizens; child mortality; global hunger. There is little that one person can do. So when faced with seemingly insurmountable conditions, the key to sustained action (and greater well-being) is to locate the opportunities for hope within those conditions. While not denying the magnitude of what one is facing, having the mindfulness to ask “what can I hope for”? 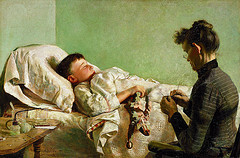 Palliative care physician Chris Feudtner provides an illustration. When having to tell parents that there is nothing they can do to prevent the death of their child, Feudtner asks them about hope (2005). After wishes for a miracle, the parents may just want their child to go home. They may hope that the doctors and nurses will stop poking and prodding and testing their child, so that she may be as comfortable as possible. These are things they can control. In the face of insurmountable conditions, Feudtner helps people identify what they want, a pathway to get there, and the energizing reality that they can do something to make the circumstance better. Feudtner helps them continue on, with greater purpose and energy, by helping them locate hope.

In this way, hope is dynamic. The “reward” that we hope for is going to be different for each person, and in each circumstance. So while I cannot stop a nation from torturing its people, I can help one person flee to safety. I can help him reunite with his family in a secure place. He can help inform others about the crisis in his country, and attract attention and aid. As we discuss together the things that we can hope for and can affect, our energy increases and our action is sustained.

… the bottomline got hit when #1 hit the roof!

Women with Belief™ Series: Notes from an Opera Singer.©

Sean: I enjoyed reading your piece today. It is very easy to be overwhelmed by the sheer magnitude of darkness in the world today. Your advice to focus on what we can control is how I try to live. While I can’t save every tortured, starving child, I can take care of those around me. I can control that. At the same time, while I can’t control everything, I can at least have an influence on a broader range of things. I think our combined focus on the things we can control and the things we can influence can yield some amazing positive changes. Thanks for your thoughts. Doug

Did you ever see the movie Eyes Wide Shut by Stanley Kubrick? There is a scene that I vaguely remember between Tom Cruise and Nicole Kidman where the two discuss the nature of control. What is control, anyway? It is an illusory state where you think you can control life’s variables?

I would imagine as a poet you have thought about these deep ideas occasionally.

I think freedom is at the heart of choosing ones response to a situation regardless of our ability to see the outcome or be assured of the outcome we desire. Perhaps the reward is joining the struggle for a worthy cause.