The Visitor: The “Positive Snowball” Effect

“When you are upset or stressed, who do you turn to for support?”
“No one.”

“Do you have people who offer support to you at work or home?”
“No.” 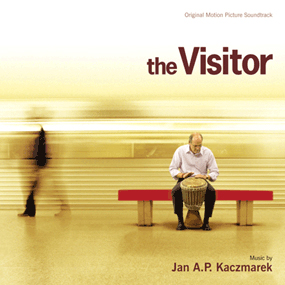 These are two of the saddest responses I have heard.  As a clinical psychologist I hear these words often. If Walter Vale – the lonely, isolated professor in The Visitor – walked into my office, these would be his responses as well. In a word, Walter is languishing (vs. flourishing). He lives a mindless existence, without a purpose, going through the motions in his academic work. He could be described as an automaton, consuming and floating along the surface of life. Walter eats alone, drinks wine alone every night, and is disengaged at work meetings. He avoids anything new and when he’s offered to go to New York City to give a talk at a conference, he contrives numerous reasons to get out of it. One gets the impression that if Walter were to die, no one would notice. And this significant – as Mother Teresa said: “Being unwanted is the worst disease that any human being can ever experience.”  The Visitor has been selected for the Sundance film festival, the Toronto film festival, and others.

Psychologist Corey Keyes of Emory University frequently writes about the “diagnosis” of mental health and the flourishing-languishing continuum.  Keyes places emphasis on social well-being as critical in a healthy adjustment to life. According to Keyes, a socially healthy person:

Walter is not socially healthy initially.  But he changes. He comes alive.  He comes home one day to see two illegal immigrants living in his house (trailer).  And – strangely – he befriends them.

In so doing, starts adventures that include Djembe drumming (a West African hand drum). Walter moves from isolation to social connection slowly. As he connects, he becomes more aware of himself: “The truth is I haven’t done any real work in a long time,” as he refers literally to his university work and metaphorically to working on improving his life.

Just as negative experiences can lead to more negative experiences (the snowball effect), positive changes can do the same creating a “positive snowball” effect. Adept positive psychologists and coaches capitalize on this virtuous circle in their work with clients, helping them to build strengths that in turn “build up” other strengths.

Curiosity as a Doorway to Coming Alive

Walter’s curiosity in humanity and in different cultural practices emerges and piques as he reaches out to help others. Todd Kashdan of George Mason University and Michael Steger of Colorado State University describe in a 2007 paper the character strength of curiosity and how it assists in constructing and searching for meaning in life:  Walter’s burgeoning curiosity for life, humanity, and music clearly leads to a deeper sense of life meaning. Walter begins to find meaning in playing music and in the lives of three individuals cast aside by society. The virtuous circle opens up and Walter’s strengths of open-mindedness, fairness, playfulness, and kindness reinforce his strengths of curiosity and meaning/purpose (spirituality).

The theme of meeting and developing “unlikely friendships” is not a new one to director Tom McCarthy, who explored the transformative role of connection between an isolated dwarf, a suicidal woman, and quirky hot dog vendor in the cinematic gem, The Station Agent (2003). These three characters, prior to their friendship, would answer the preceding questions in the same way as Walter.

What Does “Visiting” Mean?

Walter, a man who’d previously been merely “visiting” life has shifted into a mode of engagement, connection, and meaning. For us, the viewers, to experience this is no doubt cinematic elevation.  As I write about with my co-author Danny Wedding in our book Positive Psychology at the Movies: the viewer feels the positive emotion (while we observe Walter’s character change) and wants to take some meaningful action in his own lif when the film credits conclude.

Subtlety in this beautiful little film captures a number of humanity’s moments: the slow movement toward the social, curious thoughts leading to a purpose.  These are turning-point moments of choice in which self-reflection leads to a change in perspective, the gleeful smile of a character receiving a surprise, and the comforting joy of someone who knows their gift has been well-received. This film reminds us that life is a collection of moments.

How Can Mindfulness Increase Health or Happiness?

Welcome to the site Ryan! Thank you for addressing this topic. In a lot of ways it is similar to an area in whcih I have an intense interest – reviewing novels with an eye toward positive psychology.

It sounds like “the Visitor” takes a positive turn. (I have not seen the movie) However, often there are artistically significant movies and novels that are bleak or emphasize the darker sides of human experience. Any suggestions for how to approach these?

Thanks again for you insight!

Thanks to you, I’ve become a big fan of the Apple trailers site. In fact, I liked “The Visitor” trailer, and just got pulled in to watch others.

Here are some I think you may like too:
Happy-Go-Lucky: out since Oct, this seems like a cross between Amelie and Pollyanna (the best version of Pollyanna)
The Soloist: out in 2009, about a musician formerly Julliard who plays on the streets
The Boy in the Striped Pajamas: out since Nov, powerful trailer

Also, really neat to me how you describe in one of your last paragraphs about how “The Visitor” refers to the protagonist and not to the person in his home – interesting!

I liked how you connected the movie with positive psychology. I just saw the movie not too long ago myself. Pure chance that I came upon it. When I watched it, at first, I wasn’t even sure if I would like the movie. Well needless to say I enjoyed it very much. Both the struggles and joys felt truly authentic to me and moved me. The nice thing about movies like this is that they tell a story about life, which is largely missing from mainstream Hollywood.

Thanks for your thoughtful synthesis.