Mirror, mirror, on the wall…

A new report has found that being super-thin is bad for models’ health. But what effect do size zeros have on the rest of us? 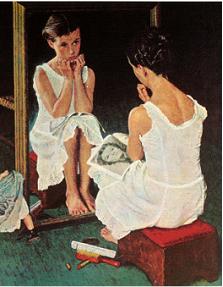 In 2006, researchers Gurari, Hetts and Dtrube have found that looking at photos of thin, beautiful models tends to make women more concerned about their weight and less satisfied with their body. According to Kenrick and Guttierres, men are affected, too: after looking at beautiful women, men judge potential blind dates as less attractive.

Social comparisons affect us in other life domains, and can lead us to make irrational decisions. For instance, studies have found that people would rather take a lower salary and earn more than their colleagues than have more money in real terms but less than their teammates.

Buunk and Mussweiler explain that we size up other people because these comparisons can confer evolutionary advantages. Comparing yourself to others who are worse off can boost happiness by making you appreciate what you’ve got. And the urge to be better than others drives innovation and achievement. Upward comparisons can be inspiring – when the other person’s success is within your grasp. But when that success is looking like Elle Macpherson, most of us don’t stand a chance. With the advent of global media, our comparison group is vastly increased. Instead of wanting to be the hottest girl in high school, we now want to be the hottest girl on Facebook – the social networking website which recently added a function allowing you to compare your friends to each other.

We’re not all susceptible to social comparison effects, however. Unhappy folks make comparisons more often, and feel more wounded when they come out badly. They even feel better after negative feedback where another did worse than they feel after positive feedback where someone else did better. Dispositionally happy people, meanwhile, rise above it all.

So, what can you do if you’re someone who thinks the grass is always greener? Firstly, you can limit your exposure to comparisons. Secondly, regularly take the time to count your blessings and savour the good things in life. Instead of concentrating on what you’re missing out on, think about what you’ve got: in particular the friends and family who we often take for granted, but who really make the difference between a happy life and an unhappy one. To quote Marcel Proust, “Let us be grateful to people who make us happy; they are the charming gardeners who make our souls blossom.”

Does Success Breed Success? The Ups and Downs of Capitalising

Is it really all about the cognitive frames?

I think you are onto something big here. Maybe we should surround ourselves with the ugliest, poorest, nastiest smelling creatures on earth to reset others’ perceptions of our appearance, status and personal aroma. If I want to appear athletic & nimble, I just stand next to a broken-legged Angus! To appear thinner, sandwich between two of the most obese Americans you can find and to appear taller, hang out with the Seven Dwarfs.

…the best part is there’s so much suffering in the world, you’ll never run out of downward comparisons.
I think we should Widen the Gap and increase opportunities for personal happiness. Whenever possible, inflict Pain just to feel a little better that the poor schmuck with sand in his face is that much worse off! Man, I’m savoring that barfly’s busted nose. Stealing that kids’ lollypop felt SOOOO good. I feel so great, I’m going to the nursing home to kick some elderly ass, right now.

I kicked in my brand-new TV and now I’m a Sadist. Thanks, Rosie.

Awesome piece once again, Rosie! Elderly people rest assured, this reader for one won’t be coming round on Jeff’s mission….

Rosie
I think you have made some very important points here. The key thing for me is that focussing exclusively on the self in an attempt to ‘find happiness’ is a surefire way to feel dissatisfied and disappointed. Unfortunately that’s what the majority of celebrity role models seem to teach us. There will always be other people more [beautiful / thin / rich / intelligent / sexy ][insert your adjective of choice] than us. If we stopped focussing so much on our individual well-being, and started focussing more on other people’s, I think we might start to become a little more contented….

Rosie, thank you – neat points on social comparison. I especially see clearly once you wrote it the idea that we can compare ourselves with everyone on myspace and facebook. We can actually. This reminds me a little of Caroline’s article on beating bullimia. Thanks.

In all seriousness, which is the better path: social comparison looking downhill or avoiding social comparison the best that you can? You might suggest a moderate mean between the two, sort of a fuzzy logic solution with shades of gray a la cofounder of Skeptic magazine Michael Shermer.

Yet in practice, I bet that the middle way here is much harder than taking a binary extreme and sticking with it. So if you had to choose, which would it be, looking down from the mountaintop or contemplating your good fortune without a social context?

Join the crusade, my man.