Does TV Make Us Happy? 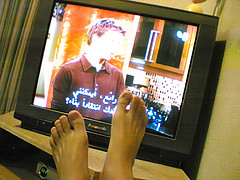 Watching television is probably the most common pastime in the world. On average, Americans spend about five hours per day watching TV, while Europeans are glued to the box for over three and a half hours daily.

But not without a little guilt. Most of us realize that the good life doesn’t involve daily doses of Big Brother. Now University of Zurich researcher Bruno Frey has confirmed that sneaking suspicion: watching TV makes us less happy.

Given the downsides of TV watching, why do we keep doing it? Of course, we look out for the occasional gems, and sometimes we find shows which expand our horizons and make us look at the world in a new way. More commonly, TV provides immediate gratification. After a hard day’s work, many of us don’t want a challenge – we want the relaxation and undemanding entertainment which TV provides so well.

Here’s the rub: the couch potato lifestyle has costs, but they’re harder to see than the benefits. Nobel Prize winner Daniel Kahneman and Daniel Gilbert have both shown that we are often poor at predicting the future effects of our choices. In addition to requiring foresight, turning the TV off also requires the self-control to forsake the path of least resistance. But the fact is that watching TV stops us from participating in activities that allow us to develop, and keeps us from spending time with people we care about. These are the things that make life happy and meaningful – and that’s what we should all remember next time we reach for the remote.

For Better or for Worse? The Marriage of Technology and Positive Psychology

Just what is the proper role or prescription of television to promote greater life satisfaction?

It is the excessive watching of television that is problematic, not merely watching the occasional program. Yet in order to form a rule of thumb regarding TV viewing, it would be helpful to know at what point the viewer’s satisfaction receives diminishing returns. Is watching one hour of television less pleasing than watching half an hour? What about program content and quality?
Where and when does the TV provide a much needed break from reality and where and when is it unlikely to boost engagement? I can imagine bedridden patients in hospitals and nursing homes whose visitors are scarce. They might have a need for the pleasure of some TV escapism.

The Junk Flow Argument is an irritating fallacy. Flow is flow, just at varying intensities. The JFA, in my opinion, comes from a prejudice against certain hobbies, like playing video games, watching television, or surfing the Internet. Other more socially acceptable hobbies, like painting or other “productive” pastimes are considered skill building and elicit “Real Flow”. It is not what you do to get flow, but how you do it. Look at the meditating Koreans, ballerinas, ice skaters, chess players, on and on the diverse flow-making activities go. Those with clear goals, immediate feedback and all the characteristics of flow production tend to get higher levels of flow. If the flow conditions are lacking, there’s less flow.

For the TV Complaint to have everyday utility there should a rule of thumb to guide our TV watching behavior.

Nice piece Rosie, I especially like the Kahnemann linkage as to why we are so reluctant to press the off button (and so suspectible to continuity tricks e.g. volume increases for adverts). It hadn’t occurred to me but you are right it is so pervasive.

WELCOME NEW WRITER ROSIE!!!
Great to have you on board!

I really like that your article takes apart the argument against TV and breaks it into its various psychological components – it’s nice to see that it’s not just a general “tv is bad” but more like “here’s what tv does in particular.”

Rosie,
I really enjoyed your piece. I think that television seems to dominate our time and energy. It is sad to think that out level of well-being is so negatively affected by it.
Great work!

Thanks to the advances of modern technology like TiVO and DVR, I’ve found ways to optimize the little bit of pleasure I get from watching the tube. I record only the shows I like to watch, and spend about 45 minutes each night watching just those shows. I fast forward through all of the commercials (not to mention to fear-inducing local news flashes!). I’ve found this to be a guilt-free way to indulge in my favorite shows, while still leaving plenty of time in my night to read and write, cook dinner, spend time with friends, and relax.

I would add that watching television news makes it even worse, especially the sense that the world is a more dangerous place.

Television doesn’t make us happy, that’s for sure. And although most people must know that, we watch anyway. Partly because of the immediate gratification, as you say, but also partly because these television producers do everything they can to keep us watching, even against our will. If that means teasing us, they’ll tease. If it means horrifying us, they’ll horrify. And if they don’t, someone else will. They’re in stiff competition for our attention.

To live a good life, each of us has to apply the self-discipline to turn the thing off more often. Good post, Rosie.

Thanks for your comments everyone.

I’m not aware of research which has looked at the happiness effects of watching different types of TV content. I suspect this could be important, though – as well as the effects I describe above, the different messages received from different shows may well have an impact on wellbeing. Public service broadcasters such as the BBC should be funding this research in my opinion!

Lastly, Jeff I agree with you about junk flow. I think there’s a tendency among some researchers to regard all positive experiences as flow, so that less challenging experiences are dismissed as ‘junk flow’. I see flow as just one positive experience – meditation and relaxation are others. We all need to relax sometimes – but I think a full life would involve both challenge and relaxation – and if you’re spending 2.5 hours per day watching TV, that might crowd out opportunities for challenge.

Excellent response! I love it when we get to play with ideas and find common ground. I’m glad you newcomers are adding your distinctive voices to the conversation b/c it really does promote all kinds of new thinking and possibilities.

Positive emotions generally produce positive results, so why wouldn’t watching, let’s say a comedy show like Whose Line is It Anyway? if it pumps up your pleasure and maybe you exercise appreciation of excellence while watching it boost your results in life?

I think the key bit is watching too much and too low quality shows, maybe that’s the third variable, the marionetteer behind the TV problem. Relying on TV to provide you with a life!

Rosie,
I wonder how many of the hours counted are televisions left on in the background while people go about other activities? I think of visits to family members who keep the tube turned on continuously because the noise is soothing to them. I find it very distracting during the visit — the TV screen is an eye magnet for me and I feel rather rude. But I’ve observed that they don’t seem to pay it any mind.

I just got back from a 3.5 week visit to downtown Seattle where we kept the windows open. So I’ve just swapped the ever-present traffic rumble and sirens for tree frogs and cicadas as my evening background noise. After getting used to them, I don’t pay them much mind — unless I’m specifically thinking about listening. I wonder if TV works the same way in many lives.

Kathryn, Frey acknowledges this is a problem with his research – it doesn’t distinguish between watching TV as a primary, secondary or tertiary activity (i.e. TV on in the background while cooking and chatting to your husband). Research on this would definitely be useful – my suspicion is that this would be less of an issue, but that even this would not be ideal, e.g. because it limits the attention you give to your husband, which could damage the relationship in the long-term, and of course this kind of TV viewing makes our lives less ‘mindful’.
Best wishes,
Rosie