Peter R. Worrell, MAPP '09 is the Managing Director/CEO of The Bigelow Company LLC. Bigelow, originally established in 1935, is an independently owned merger and acquisition advisory firm whose clients are exclusively highly successful private entrepreneur owned enterprises. Worrell is passionately committed to the practical application of positive psychology to optimize entrepreneurs' decision making in the domain of risk. Full Bio. Peter's articles are here.

“Thank God I grew up with one advantage—that I had to work for everything I got.” This is only one of the endlessly inspiring quotations and findings from a yearlong research project we recently completed on the character strengths and grit of seasoned entrepreneurs. We asked, “Do seasoned, successful entrepreneurs exhibit a unique blend of signature character strengths and persistence compared to the general population? If so, does it matter?” 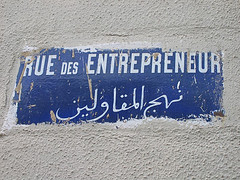 Results of a Preliminary Study

According to Park and Peterson, signature strengths are positive traits that a person owns, celebrates, and frequently exercises. The list above is more than a simple demographic. We mapped these strengths on to the character strengths tradeoff diagram that Dr. Peterson included in A Primer of Positive Psychology, Remember the caption from this diagram, “The farther apart are two strengths, the less likely it is that the same person habitually shows both.” The top 5 character strengths for entrepreneurs are evenly divided between the heart and the mind sides of this diagram. Interestingly, they are skewed towards a focus on others, as opposed to a focus on self. 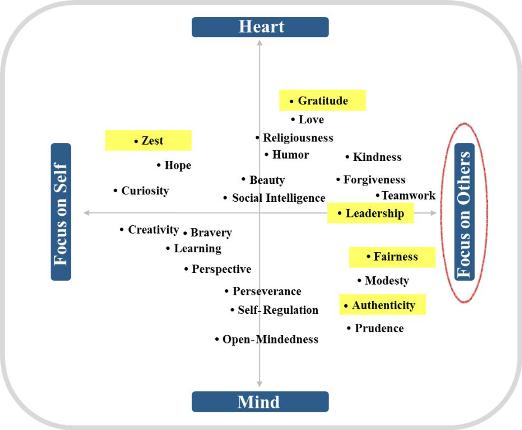 Character Strength Tradeoffs, adapted from Figure 6.3 in A Primer in Positive Psychology

Grit is perseverance and passion for long-term goals; working strenuously toward challenges; and maintaining effort and interest over years despite failure, adversity, and plateaus in progress. Relative to the general population, entrepreneurs score high on Grit and exceptionally high on “persistence of effort.”

Why supplement the input from the entrepreneurs themselves with input from their expert advisors? It isn’t that we don’t trust entrepreneurs’ self reports, but we wanted to cross check their answers with the cold objectivity of hard-bitten experienced professional advisors. The outcome? Our statistical analysis shows the correlation between the answers of entrepreneurs and their advisors is 0.85.

Entrepreneurs in the Crowd

What’s interesting about this ?


What we found interesting is not only what is there in the results, but also what isn’t there. Surprisingly, some strengths conventionally associated with entrepreneurs by our popular culture or the media, such as Creativity (Risk Taking), were found to be in their Bottom Five Character Strengths. Acknowledging that once in a great while there is a brilliant solo tinkerer like Thomas Edison or Steve Jobs, the vast majority of seasoned, successful entrepreneurs thrive through building a unique team of talent. Could it be that entrepreneurs with this combination of socially intelligent signature strengths mixed with grit are able to attract and retain teams of complementary talent which result in the building of extraordinary Enterprise Value?

Ultimately readers will answer for themselves, but given the destruction of post-industrial bureaucratic organizations taking place around us, now is not the time to be complacent about the role of new enterprise creation, nor to overlook the potential these new firms and their entrepreneur owners have to bring about positive change. The vast majority of wealth, at least in North America, that is used to fund both the for-profit and ultimately not-for-profit sectors, is created through the work of entrepreneurs. Given the desirable social and economic outcomes that entrepreneurs produce, a better understanding of their signature character strengths will be useful for lenders, equity investors, educators, and fledgling or “would be” entrepreneurs, including students. As far as we know, this is the first research of its kind to study how the VIA Inventory of Character Strengths and the Grit Scale apply to successful entrepreneurs.

Peter R. Worrell has a particular interest in the intersection of psychology and finance and its relevance to building value in private capital markets. His efforts go to the practical application of the insights drawn from these multiple disciplines to improve decision making in the owner-manager domain of risk.

Putting the World Back Together Differently

Is Happiness Woolly, Mad, or Insane?

Great article and enlighten graphics, Peter. I couldn’t agree with you more re: how times have changed. Teams and searching for and co-piloting with others who have diverse talents is a far cry than when I began my first business 33 years ago. Then it was MY pluck and MY working over time. Now I have coaches, consultants, mentors, computer researchers, and others who color my path with colors not ordinarily in my crayon box. Many thanks from this appreciative lady entrepreneur.

Very well done, Pete, and thanks to PPND for publishing this article. This is important work for those who work in the business sector.

I love your great article and with your idea I make a mapping of my Character Strengths (CS) which are :

Could you suggest me about my calling based on the above 5 CS?

Thanks for your help.

I’ve lived this! This very much justifies what I believe based on being Angel and VC funded. Kudos.

Hello Peter,
I’m so glad you brought your research to the PPND community. I found this study eye-opening and challenging of what we normally consider the strengths of entrepreneurs. Thank you.
Louisa

Thanks so much for sharing your research with the PP community.

I think, as you note, one of the most interesting parts of the study is that the primary strength focus is on others. The perception of entrepreneurs, at least in the popular media, is that most of them are just out to make money for themselves. This research shows that mavericks, indeed, have a heart.

This is really great stuff! Read your full study and I cannot tell you how excited I am about your findings. They challenge the common misconception we have about entrepreneurship. In fact, when you think about it, the character traits make quite a lot of sense! Thanks