Pulled by the Future

In a special lecture preceding this year’s first International Positive Psychology Association (IPPA) World Congress in Philadelphia, Martin Seligman laid out his vision of a new field called positive education. He also stated that positive psychology is not about being pushed by the past and is about being pulled by the future, an even more intriguing idea in my view.

What is positive education and how is it different from current education? As you can imagine, positive education is about teaching well-being practices within a classroom setting. Seligman declares that these practices not only can be taught, but also augment the teaching of other subjects. This has been replicated 17 times around the world to significant positive effect. (No pun intended!)

“Human Beings Can Be Pulled by the Future”

Seligman then took a turn in his lecture and addressed his new perspective on positive psychology, that we can be pulled by the future rather pushed by the past.

Psychoanalysis posited that people were prisoners of their pasts. Yet only about 5% of the variance in who becomes depressed is explained by past conditions. 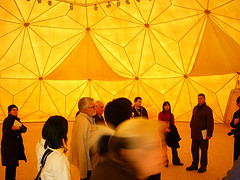 In a Geodesic Dome

An alternative view is that we form our reality from our expectations of the future. We can learn to do this in ways that help us become our best selves and create our best society.

To highlight his view, he references Roy Baumeister’s “brilliant” perspective on consciousness itself. “According to Baumeister,” says Seligman, “the function of consciousness is to simulate the future, and then choose among the simulations.”

I believe that Seligman’s view of positive psychology is one of true freedom – freedom from our unconscious and oftentimes negative past. We can consciously live as much as possible in a state of positive emotion, envisioning our best possible futures, and then freely and consciously choosing to move in the direction that creates our best lives and our best selves. In a way it is a giant, daunting view of our potential. Do we have it within us to live up to our own greatest potential? Martin Seligman seems to think we do.

“We need a science of being pulled by the future as opposed of being pushed by the past.” – Martin Seligman

I am an undergraduate school student of Cavite State University, Cavite Philippines. I saw your Emotional Intelligence Self-Evaluation Test via the internet. I would like to ask your permission to allow me to use your instrument on my research about emotional intelligence of the educators in our university.

I hope of your affirmative response regarding this matter. Thank you so much and God bless.

Very respectfully yours yours,

Dear Dr. Nicholas Hall,
Greetings!
I am currently enrolled for Doctor of Education in Guidance and Counseling at Central Philippine University, Iloilo City, Philippines. I would like to ask permission to allow me to use your instrument, the Emotional Intelligence Self-Evaluation Test in my dissertation about the emotional intelligence of the states and universities faculty members, basis for the development of a wellness program.
I hope for your positive response in this matter. Thank you and God bless.

Hi,
In fact, I am not the creator of this test. The emotional intelligence test is the MSCEIT – the Meyer, Salovey, Caruso Emotional Intelligence Test. It costs money to use, and you must be certified to administer it and interpret the results. You can find more here at: https://tap.mhs.com/Home/MSCEITTrainerPage.aspx.
Good luck,
Nick