Home All On Contentment
AllMindfulnessPositive Emotion 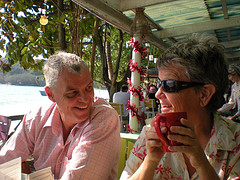 Miriam Ufberg, MAPP, lives in New York City where she manages a yoga studio, which is part of the first national family of studios. She is a registered yoga instructor with a focus on scoliosis and spinal fusions. Her Positive Psychology focus is positive organizational development, leadership, authenticity, and the role of meaning in life and character strengths for emerging adults. Full bio.

Contentment is one of those buzz words that we usually hear linked with any discussion around ‘the good life.’ It is referred to either directly or indirectly in most of the scales listed on Authentic Happiness. But is contentment an attitude that we choose to bring to our lives or is it an effect of our well-lived lives? Karen Reivich and Andrew Shatté describe iceberg beliefs, deeply held beliefs about who we are and how we believe the world should operate that “float” beneath the surface of our consciousness. Do our iceberg beliefs dissolve once we find contentment, or do we need to remove those iceberg beliefs in order to find contentment?

Positive emotion researcher Barb Frederickson suggests that fear elicits a desire to escape, anger the desire to attack, disgust the desire to expel, guilt the desire to make amends, shame the desire to disappear, sadness the desire to withdraw… all specific action tendencies associated with certain negative emotions. If I were to ask you to feel these emotions in your body, each of them would encourage a real action, some sort of ‘doing.’ This idea of emotion leading to action is what we are most familiar with. Because actions are seen and observed by others, they are viewed as the essence of our contribution as human beings. On the other hand, an emotion or state like contentment elicits inaction; something more foreign in our Western minds.

The Yoga Sutras of Patanjali includes contentment, known as santosa, as one of the five niyamas or ‘shall dos’ in our dealing with the internal world, decreeing “as a result of contentment, one gains supreme happiness.” He talks of contentment not as complacency but reverence. Frederickson suggests that instead of prompting action, contentment “prompts a mindful broadening and integration of a person’s self-views and world views.” As negative emotions are an alarm for our sympathetic nervous system to respond and protect us from harm, perhaps positive emotions and states of being, specifically contentment are there to elicit a response from our parasympathetic nervous system, to relax us, to calm us to breed thoughts of serenity. As Desikachar explains, contentment is acceptance of what has happened, what we have, and what we’ve been given.

Then contentment must be both an attitude that we bring to our activities and one that is a result of our actions. This is where our iceberg beliefs (samskaras in yogic terms), our impressions of ourselves and of the way we think things should/should not be based on prior experience, can prevent us from finding contentment. If we enter into activities allowing our iceberg beliefs to lead the way, than our experiences will inevitably be tainted and perhaps doomed. If we take habitual action to remove our iceberg beliefs then contentment can follow; we are no longer weighed down by the accumulation of past thoughts and actions but freed to experience and find joy and peace in time and space as we are actually experiencing it. This draws back on my previous post about in the moment savoring. 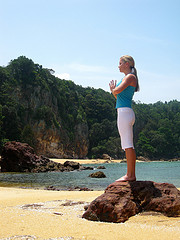 But what habitual actions can we take to remove these iceberg beliefs so that we can experience contentment? Researchers Smith, Compton, and West found that people who practiced meditation at least three times per week, in conjunction with Fordyce’s program to increase happiness showed improvement over those who did the Fordyce program alone. Kabat-Zinn and others have found this to be especially valuable in dealing with stress. Creating this time of calm in the day builds positive emotions of interest and contentment, which helps people realize feelings of centeredness that they may not have realized before. Experiments conducted by Isen, Johnson, Mertz, and Robinson have demonstrated that positive emotions built from mindful exercises produce unusual, flexible, creative and receptive patterns. Isen suggested that positive affect “enlarges the cognitive context,” an effect recently linked to increases in brain dopamine levels by Ashby, Isen, and Turken.

Without being too grandiose, I’d venture to say that we can find evidence all around us that in fact those iceberg beliefs do not have to be accurate just because they occurred once before. We can put these large and small misperceptions of ourselves or of our environment into new perspective. So, it seems contentment is both contingent upon and fundamental in the removal of iceberg beliefs.

Kabat-Zinn, J., Lipworth, L. & Burney, R. (1985). The clinical use of mindfulness meditation for the self-regulation of chronic pain. Journal of Behavioral Medicine, 8Abstract.

Mimi graduated from the University of Maryland with a BS in Marketing and worked for 5 years as an Advertising Executive. She studied the role of positive psychology in the realm of leadership authenticity and the role of meaning in life for emerging adults. She is a certified yoga instructor and manages a yoga studio in New York City.

Positive Psychology: Above and Below

Hi Mimi! Loved your article, and your theme of exploring the intersection of Yoga and Positive Psych…I find the stuff really fascinating and I look forward to reading more of your thoughts on the subject as they develop. Contentment is a huge issue for me, and I like you linked it with iceberg beliefs. Great job 🙂

Great article. I would totally agree that meditation is a valuable tool to increase levels of happiness or contentment. As a daily meditator for the past sixteen years, I’d have to say it has brought a dimension and peace to my life like no other practice has. Now, I crave my daily meditation time, a time to shut out the world and go within.