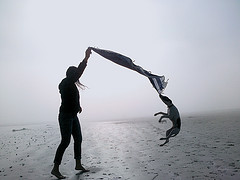 When my sister and I were kids, Melanie had more talent than I did in just about everything. Perhaps perseverance was an exception because with her ability level, she really didn’t need that much perseverance. No worries, I don’t have a complex. She just had an easier time than most. She was such a fast learner that school was boring to her. But when she was in 5th grade, completely unexpectedly, her marks started to decline. Her mood got in a slump. She couldn’t find her usual enthusiasm.

Melanie’s teacher suggested that our parents get a dog, because it could help her in many ways. As shown in these 10 health benefits of owning a pet, the smart lady definitely knew what she was talking about. Just a few weeks after welcoming Caresse (means hug in French) into our family, my sister’s grades, attitude, and life were back on track.

Today I’d like to spend a few minutes looking at the many health benefits of owning a dog.

Research by Ulväs-Moberg and Handi as well as by Hare and Woods shows that in healthy relationships, dog ownership can help reduce the stress hormone cortisol while boosting the good guys oxytocin, serotonin, and dopamine. Those of you who have read our book, Smarts and Stamina will recognize that this improved biochemical activity is the basis of our health promotion model. It will help regulate our sleep by reducing the likelihood of insomnia. It will also help us keep our food intake in check by reducing cravings. It will help us improve our moods, because less cortisol, more serotonin, and more oxytocin make us feel less irritable, friendlier, and calmer.

Dog ownership is also often associated with increased exercise. Michigan State University researchers Mathew Reeves and colleagues reported that 60% of dog owners that take their pets for regular walks meet federal criteria for regular exercise. Nearly 1 in 2 dog walkers exercise an average of 30 minutes a day at least five days a week. Only about 1 in 3 of people that don’t own dogs get that much regular exercise. 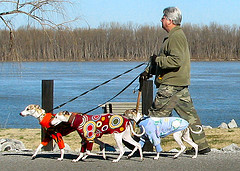 It gets better. Owning a dog is also associated with improved blood pressure and cardiovascular health, lower cholesterol and triglycerides as well as decreased anxiety. As Wayne Jencke pointed out in his article about how positive emotions lead to good health, walking a dog is more calming than walking by oneself. It seems to be true, as claimed by Martin Mulcahy in The Atlantic that dog owners tend to live longer.

There are suggestions in the research that dog ownership can help child development, just as Caresse did for my sister.

So I’d be curious to hear your thoughts on what man’s best friend can do for people who need a hand — or maybe 4 feet — to build better sleep, food, mood, and exercise habits. Thoughts?

Editor’s Note: Another version of this article was published im Marie-Josée’s blog, Smarts and Stamina, where she publishes weekly articles particularly geared to health coaches and other professionals promoting healthy habits.

Endenburg, N. & Baarda, B. (1995). The Role of Pets in Enhancing Human Well-being: Effects on Child Development. In I. Robinson (Ed.), The Waltham Book of Human-Animal Interaction: Benefits and Responsibilities of Pet Ownership/a>. Pergamon Press.

Handi, L. & Uvnäs-Moberg, K. (no date). Associations between the oxytocin and cortisol levels and the relationships between dog owners and dogs.

Mulcahy, M. (2012). Live Like Royalty: The Many Health Benefits of Dogs, Man’s Best Friend. The Atlantic.

Marie-Josee Salvas Shaar founded Smarts and Stamina to help organizations implement healthy living as a business strategy. She combines positive psychology with fitness and nutrition to accelerate personal and professional health and growth.

3 Reasons to be Inspired by Nick Vujicic, a Man with No Arms and Legs

MJ – we have an old english sheepdog called tiggy. There is nothing more relaxing than petting her thick woolly coat. My heat rate variability goes through the roof whilst doing this.

We often take her for a walk in town, and the smile on peoples faces when they see “Muffin Mclay all covered in hay” is something to behold. She has an amazing impact on people wherever she goes.

Check out the Courthouse Dogs nomination for The International Criminal Court in The Hague award for innovation in justice. If you think this is a worthy entry, please vote for it. Voting ends October 18.

My friend Ellen O’Neill started an enterprise to help courthouses learn how to use dogs well. Dogs not only help children in difficult interviews. They can also help in the courtroom where emotions can run high. Somehow seeing a relaxed dog makes everybody calmer. Dogs can contribute to more efficient and more compassionate justice – for some of the same reasons mentioned in this article.

Totally on board with this – dogs are the most loyal, loving creatures that will always love you unconditionally. Not only do they come with the benefits pointed above, but they also remind us to live a happier, more playful life.
I outlined their happiness life lessons in a previous blog posts I wrote: http://www.happyologist.co.uk/wellbeing/happiness-life-lessons-from-a-dog/