Home All A Magical Day of Inquiry, Scholarship, and Practice
AllConferencesResilience

A Magical Day of Inquiry, Scholarship, and Practice

FAIRFAX, VA – On 13 April 2012, George Mason University held its third annual conference on the intersection of resilience, well-being, leadership, and strengths. This year’s theme, Living and Leading with Resilience, attracted a sold-out crowd eager to learn from researchers and practitioners such as Rick Hanson, Chris Peterson, Sarah Pressman (who did those cool studies on psychologists’ biographies to find out that more positive texts correlated with 7 years more life), and Kim Cameron from the University of Michigan Positive Organizational Scholarship Center.

I’ll start with the ending, a closing keynote by Todd Kashdan, Mason professor, psychologist, and senior scientist at the Center for Consciousness and Transformation. Kashdan adds a vertical dimension to the discussion, taking business-as-usual and giving it depth.

“It’s time we dip outside the field of what we call positive psychology into related, scientifically-informed disciplines,” he urged.

Kashdan presented some experience sampling research conducted by his Laboratory for the Study of Social Anxiety, Character Strengths, and Related Phenomena, showing that having sex the night before can lower levels of social anxiety by up to 25% the next day. “We have natural interventions: people,” he said. “No therapists needed.”

Kashdan spoke of a concept he calls emotional alchemy as a way to build emotional intelligence, a skill he says we are conditioned to believe we finished learning in kindergarten. His definition of social anxiety is our need to belong gone awry, plus an avoidance-focused lifestyle that results in an erosion of positive experiences.

Chris Peterson and Nansook Park gave the lunchtime keynote and spoke of resilience as “struggling well.” As an example of emotional alchemy that takes us away from the old “bounce back using your own boot straps” mentality and gives us permission to be human, they closed with the following video, showing Derek Redmond achieving real-time resilience with the help of his father.

Brain and Mind are Connected

Rick Hanson’s talk, “Taking in the Good,” addressed the notion of self-directed neuroplasticity: changing the mind to change the brain to change the mind. Our minds are our experience (thinking, feeling, sensing), and our brains are the organismal totality of our nervous systems.

A simple experience of focusing attention on the feeling (not just the thought) of something good has enormous impact, activating the insula, a part of our brains used for knowing ourselves and having empathy for others. Focusing this way has been shown to lessen cortical thinning, thus reducing the cognitive decline that often comes with aging. 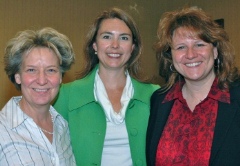 The conference included many sessions on the practical applications of positive psychology in the world, including Beth Cabrera’s session on good transitions, secrets of resilient entrepreneurs, and positive leadership strategies. Beth Cabrera is a positive psychology practitioner and wife of Angel Cabrera, incoming president of George Mason University.

I gave a talk on SOcial-eMOtional Leadership, an intervention I’m facilitating in partnership with the Center for Consciousness and Transformation (CCT). I was delighted to be joined at the conference by one of the first partners of SOMO Cleveland, Adele DiMarco-Kious.

Some references for keynote speakers:

Publications by Todd Kashdan, including several written with students and many with links to the article online

Publications by Nansook Park, many with Chris Peterson

Images
Resilient Growth was the logo image for the 2012 Living and Leading with Resilience Conference.
Todd Kashdan image from the CCT scholars web site.
Other images courtesy of Louis Alloro

What is a Unit of Courage? Interview with Robert Biswas-Diener

Oh how I wish I could have been there! I schemed and dreamed, all to no avail. Missed both 2011 and 2012 with heavy heart both times. Here’s hoping I make 2013. It sounded amazing all around!
Thanks for sharing!

Louis – its interesting I have refined my mediation practice over many years – it now focuses on the feeling of positive emotions – I find it far more powerful than cognitive processes like savouring and gratitude.

Thanks for a terrific article, Louis. I am still in MX, but FYI, I got an error message saying the video was blocked due to copyright issues. Drat. Regardless, I re-framed and slurped up the article and felt like I was there.

Oz, have you written about how you have refined your meditation. I would love to learn how to focus on the feelings of positive emotions.

I put a link to the video in the article, in case the embed didn’t work for anyone. Have you tried following it to YouTube?

Excellent. I’m looking to hearing more and engaging as well.