Take Me to Pandora, or The Positive Psychology of Avatar 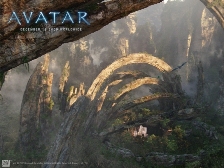 I want to travel to Pandora, the fictional planet depicted in Avatar.  I saw James Cameron’s newest film that has rocked box offices since its release in December on I-MAX 3-D and have since been urging friends to run, not walk, to see this movie. The message inherent in the panoramic view is profoundly positive and especially relevant to our world today.

The film is set in the year 2154 on Pandora, a faraway moon place where the indigenous Na’vi people roam. The film’s title refers to the genetically engineered Na’vi bodies used by the film’s human characters to interact with the Na’vi. In the film, some humans are interested in mining Pandora’s reserves of a precious mineral called unobtanium. Human greed threatens the continued existence of the Na’vi and the Pandoran ecosystem. Avatars that are part-Na’vi and part-human are created to cohabit with the Na’vi in order gain their trust.

According to Hindu mythology, an avatar is the personification of a god. The more modern Urban Dictionary, defines avatars as computerized images representing a person, like the icon you create and use when playing Nintendo Wii. Avatars resemble real human form, but are digitized.

The perceived need to have Na’vi Avatars exemplifies the social psychological research on own-race bias, the tendency of humans to gravitate towards those who look like them. Research by Barbara Fredrickson and colleagues shows that positive emotions reduce own-race bias: people with higher levels of positive emotion see more similarities and fewer differences. When we open ourselves up to the wonders of the universe, we see more wonders. Then we can see ourselves as wonders. It feels good to be seen. 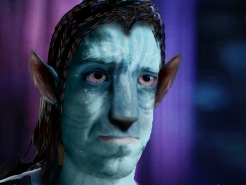 Louis with an Avatar Face

The Na’vi use “I see you!” as token of love and respect, signifying knowledge, empathy, and compassion. But being seen requires we let ourselves be seen – a conscious choice to be open and vulnerable. This relates to Carol Dweck’s research on mindset: the kids who choose harder puzzles are open to the fact that they may not be able to complete them. They take the risk anyway. They have faith in themselves (in our lingo, this is self-efficacy). The Na’vi people exemplify this faith, not only in themselves, but in the universe as well. Perhaps this mindset stems from a self-actualization and self-love that is built with self-regulation over time. Notice the emphasis on self.

But not too much emphasis. In the film, we see the hubris of some of the film’s human characters who insist it’s okay to invade and to take what belongs to the other. “To fight terror, we need terror,” says Colonel Miles Quaritch (played by Stephen Lang), the leader of the security forces. In the end, goodness prevails as Jake (played by Sam Worthington) and Augustine (played by Sigourney Weaver) build a true collaboration with the Na’vi people – not an easy task – but nonetheless a true win-win, as described by Robert Wright’s history of social evolution, Nonzero.

Your Cup is Too Full 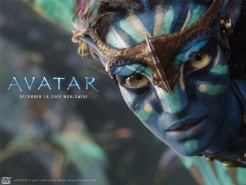 “Your cup is too full,” says Mo’at (played by C. C. H. Pounder), a shaman who is also the mother of Neytiri (played by Zoe Saldana). Mo’at encourages her daughter to teach Jake the ways of the Na’vi people. “My cup is empty,” Jake pleads as if to suggest that he is open and willing to learn. This spirit of learning is at the heart of the movie, and also at the core of positive psychology. Fredrickson’s Broaden and Build Theory is essentially a learning theory. Positive emotions put us in spaces that allow for learning, for seeing things anew, for opening, for growing.

Interconnectedness
Positive emotions happen in social situations. The film demonstrates the power of interconnectedness. One of the most fascinating scenes shows hundreds of Na’vi people linked together physically, arm to arm, with a brilliant white light radiating between them. This same light is shown throughout the planet’s natural world, as if to suggest a oneness, a peace, and the positive evolution inherent in the interconnectedness of all beings. It is energy giving.

The Message is For Us
Avatar is real-life, not just a sci-fi epic, if you’re open to seeing it that way. Ultimately, this is what positive psychology is about for me – being willing to see things in different and perhaps more positive ways. It is a mindset that can be built consciously, over time by challenging old habits of thinking, speaking, doing, and ultimately, of feeling.

Hey look, the truth is that I’m working on this process, myself. Maybe you are too? Perhaps then, we’ll co-create the brilliance of Pandora right here within the miraculous beauty of our own planet, mother Earth.

How Avatar is relevant today ~ Click here to watch Wade Davis’ TED Talk on indigenous cultures and why it’s important we save both the biosphere and ethnosphere.

Images
The images are free downloads from avatarmovie.com except for the Avatar face of Louis himself, which was done by Sherri Grice

Wow. I haven’t seen it Louis – but you convince me I should. Pandora as in the box?

I like the messages you highlight. The Hmyn of the Universe, Hindu, Muslim or Judeao-Christian – whatever.

Thank you Louis for reminding us to preserve our biosphere and ethnosphere – I couldn’t agree with you more. Avatar is indeed a very important movie, and blog entries about it are abundant. I myself started new environmentally friendly practices after seeing the movie, and I hope that it prompts others to start their own initiatives as well. If we just talk about it, we’re not going very far. But if every person who sees Avatar or reads one blog entry about it starts something new, we’re making progress!

My best to you,
MarieJ

PS: I really like that you picked up on the empty cup as something not negative, but signifying readiness to learn!

Excellent article Louis! Thank you for sharing the essence of the movie as it relates to our humanity. Love the “Your Cup Is Too Full” and “I See You” – messages that remind us to keep ‘a beginner’s mind’ and heart. Thank you – and your Avatar is very cool. Brilliant. xo Mary Anne

Angus, Bravo to you for being open to being inspired! It’s a nice reminder.

Let’s just say that Pandora, the fictionalized planet was strategically named, just like everything else in the film.

Wow! Glad to hear that your cup is ready to incorporate some new green traditions. I’m more mindful of my role in caring for the biosphere (and now ethnosphere) too. It’s a mindful intention from moment to moment — and such is life.

Thank you, Mary Anne, for helping me open my mind and heart with the work you do at http://www.toningtheom.com ~ now that’s brilliant stuff.

If Thou Could’st Empty All Thyself Of Self

If thou could’st empty all thyself of self,
Like to a shell dishabited,
Then might He find thee on the ocean shelf,
And say, “This is not dead,”
And fill thee with Himself instead.

But thou are all replete with very thou
And hast such shrewd activity,
That when He comes He says, “This is enow
Unto itself – ’twere better let it be,
It is so small and full, there is no room for me.”

Or as Henry David Thoureau said, “The soul grows in subtraction not addition.” Sometimes I feel inclined to go into the woods, too…do you?

Louis, thanks for sharing the beauty of the movie with us!! I’ve been meaning to see it and now you’ve reinforced my intention. Facinating how it weaves futuristic sci-fi, with today’s web concept of avatar, with values from many years ago.

Thanks for the review!
Christine

Thanks for the great note! Would love to hear what you think after you see it, especially now!

I’m not a Trekkie. But perhaps I should be? Sci-fi gets it.

Marty often quotes Vonnegut & Arthur C Clarke. Are you open to seeing the music elsewhere in the Universe? I am.

Thanks for sharing your observation, Wayne.
Louis

Isn’t it ironic, or is it, that this film’s inspiration took wing before
positivity psychology had a name or specific identity? Can’t wait to see it tomorrow. My positivity pulse is quickening. I hope my new website, CoachingPositivity.com, hopefully launched tomorrow or Sunday, will honor and do justice to serving all who are looking for unique possibilities, interconnectedness, and flourishing with a flare.

Thanks for your thoughts, Judy — my positivity pulse is activated too. Not sure it’s ironic. As Chris Peterson says, “PP has a long history and a short past.” Being a good person dates back to Jesus and Buddah and Aristotle/Plato, etc.

The best part for me is that I keep seeing my own role in all of this, and it’s unfolding more miraculously each day. My latest thoughts are here http://coachlouis.com/Test/wp/blog/2010/02/hindsight-is-2010-my-apology-to-president-george-w-bush/ – why I feel the need to apologize to former President W Bush.