(Film Review) UP: The Power of Now for New & Old Adventures

Last week I saw (from the first row, and in 3-D) Disney Pixar’s Up , an animated film about life, adventure, and friendship. The film certainly pulled on my heart strings in a very “other-people-matter” positive-psychology way. The film also speaks to this month’s theme of fun and play.

In it, a young hopeful and optimistic Carl Fredricksen becomes fascinated with a hero of his time, a world-famous aviator and explorer, Charles Muntz, who encourages imagination, creative play, and adventure.

Up opens with young Carl playing “explorer make-believe” by himself. He stumbles upon a tomboy named Ellie playing a similar game. A few frames later, these like-minded spirits become husband and wife, partners in life’s adventures.

Carl works as a balloon salesman, making people, especially Ellie, happy. The two hang on to adventure in their longstanding plan to travel to a waterfall in South America, a spot that Muntz made magical for them. They “crossed-their-hearts” to do this trip together.

What the film does well 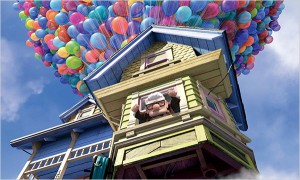 Up demonstrates the importance of creativity, vision, intention, and especially the power of commitments made with like-minded spirits. The love Carl and Ellie felt for each other was palpable throughout the movie even without words, just music. Their love included trials and tribulations, including a child lost mid-pregnancy, which helped evoke a full spectrum of emotion around the theater.

Ellie becomes sick and dies, leaving Carl, now an older man named Mr. Fredricksen, to live their adventure solo. He works to keep Ellie’s spirit alive for himself with photos, scrapbooks, memorabilia, and imagined conversations—the same creative play that first brought them together. 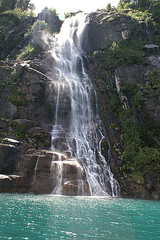 Living solo, Mr. Fredricksen finds it very difficult not to become a “grumpy old man.” But then comes a knock on his door. In comes a young boy named Russell – a hopeful and zesty member of the local wilderness adventure society looking to earn the badge that will promote him to senior status in his troop: “helping the elderly.”

For the young boy, being open and vulnerable come naturally , but Mr. Fredricksen needs time to open his seventy-eight-year-old heart to this new relationship that ultimately helps him fulfill the old dream of reaching the waterfall.

Reality & Fantasy: both what we create

Once they arrive there, Mr. Fredricksen finds a darker reality than existed in his lifelong fantasy. His childhood hero’s true colors are shown, and fortunately, he has his zesty and gritty friend Russell and others by his side as he navigates through some dark clouds.

As the film progresses, Carl becomes our hero, showing that it is never too late to realize old and new adventures. The film’s characters all demonstrate the intentional activity that Lyubormirsky describes as the part of happiness that we can control – they choose to be creative and have fun. They choose meaningful activities in line with their visions, their values, and their commitments – and of course those that put them in relationship to others. Adventure comes in relationships where palpable energy is created between like-minded spirits. However, these relationships don’t come all too easily. We learn that we have to look for them, take risks to become vulnerable in them, and then weave, in communion, the social fabric that brings dreams to life.

Up is not your traditional Disney Cinderella fairy tale film. Like Pixar’s other projects (Wall E, The Incredibles), there are socially conscious messages for children of all ages: the power of choosing adventure, the reality that heroes are not always as they appear, and the possibility that we can all be heroes-in-waiting (see Phil Zimbardo’s work on the Lucifer effect or mine on Social-Emotional Leadership).

The choice is ours to engage in relationships that involve risk, commitment, and fun.

This is Your Brain on Pleasure, Engagement, and Meaning

Thanks for a really fun review, Louis. Now I want to see it even more. A friend of mine went to see it at a drive-in! I think that would be a great excursion.

Sure thing, Senia. I suggest you go with your significant other. It’s a great date movie (and a drive-in sounds real fun)!

Louis, I loved this film when I saw it and your review made me appreciate it on a whole new level. Now I want to see it again! Thanks for reminding me of the positive emotions and life lessons this film embodies so effortlessly.

You’re most welcome, Eleanor. I kind of want to see it again, too!