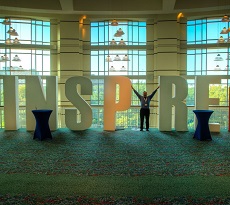 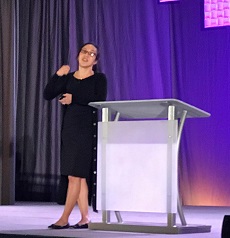 Angela Duckworth breezed into the Ft. Worth Conference Center at the end of the afternoon and quickly captivated all 800 participants with her passion, humility, and humor. Her riveting headliner talk was called Grit: The Power of Passion and Perseverance.

However, her first statement was, “There’s something bigger and more urgent in education than Grit and that something is Character.” In fact, she quoted the late Dr. Martin Luther King Jr., who said, “Intelligence plus character, that is the good of true education.” She went on to say that as a former teacher, “I never met a kid that didn’t make me want to help him or her live a better life.”

Her goal is to teach the faithful that character strengths can be learned and practiced because they are malleable. Duckworth is the founder and scientific director of Character Lab, a not-for-profit organization whose mission is to advance the science and practice of character development. With the IPEN crowd she had a most receptive audience. 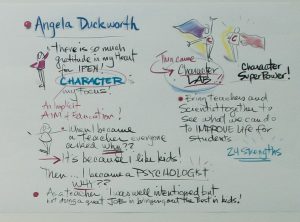 The fact that she’s also a woman of many contradictions made her talk more interesting. For example, although she is a MacArthur Genius (proving that she’s really smart) and she has been incorporating character strengths into positive education for years, when it comes to her own children, Duckworth is a self-confessed Tiger Mom. She was herself raised by two Asian parents who always quietly inquired, “What happened to the other two points?” if she got a 98% test grade. Effortlessly sharing the data from the character research while acknowledging the reality of being a modern-day parent makes Duckworth’s talks resonate with educators and parents alike.

After telling several poignant and humorous examples from the front-lines of education demonstrating how grit and self-control are distinct from IQ and how they powerfully predict success and well-being, Angela unveiled several new videos from Character Lab. These videos are part of the Character Lab Playbooks, a suite of videos, lesson plans and activities all of which are freely downloadable for teachers to use. For example, there are videos for Expert Practice (Grit), for Building Connections (Curiosity), and for WOOP (boosting self-control).

For those of you who have not encountered this acronym, WOOP stands for setting a Wish or intention; identifying the intended Outcome; articulating Obstacles in the way of achieving the goal; and creating a Plan.

More Character Lab videos appear in the references below.

Speaking of videos, if you’d like to learn more about grit, here’s a Soaringwords interview with Angela filmed in New York City on the evening before her book was published: How Gritty Are You?. 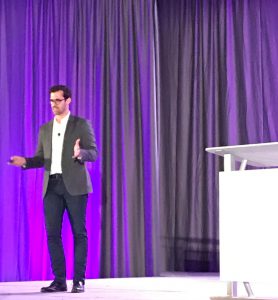 I was intrigued by the title of Dan Kessler’s talk, Making Meditation the 21st Century’s Dodge Ball, since I don’t typically think about meditation, people turning inward to calm their minds, in the same sentence with dodge ball, a sometimes vicious sport that tantalized and terrorized students in my childhood. So he had me at the title.

As the VP of Business Development and Partnerships at Headspace, Kessler and his colleagues have been busy “making the world happier” as more than 30 million people have already downloaded the Headspace meditation apps. Meditation was surely considered weird in the 1960s, but is now common as today teachers around the world lead meditation in classrooms. Students show measurable behavior changes that suggest they have become a “little bit more self-aware and kind.”

Specifically, Dan showed findings that Headspace apps increase compassion by 23% and decrease aggression by 57% after three weeks of meditation practice. After ten days, students show an 11% decrease in stress, which drops to a 32% decrease after 30 days. He ended his talk by announcing the Educator’s discount of 90%, allowing educators to sign up on Headspace.com for $1 a month. 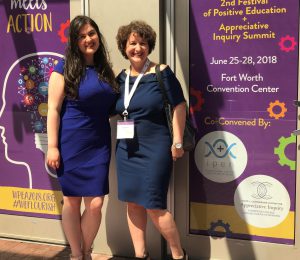 SOARING into Strength in the Classroom

I was delighted to co-present two talks during the afternoon break-out sessions with my esteemed colleague, Jessica Finkelstein, the After-school Advisor and Health PE teacher at Millennium High School in New York City.

Our first talk illustrated Soaringwords’ pay-it-forward positive educational interventions using expressive arts projects (writing, artwork, movement and song) that have been shared with more than 100,000 students in classrooms and schools throughout North America and dozens on other countries. Students experience a shift when they discover that doing something kind and simple for an ill classmate or a child who is in the hospital can actually have a transformative impact on his/her own well-being. It makes the teachers feel pretty amazing as well! The second talk shared Best Practices for Educators, Parents, and School communities when a child is ill or dies. Specifically, we talked about the Ten Things to Never Say to a Student Who is Ill or to a Child who is Grieving.

Please contact SoaringWords.org to learn more about sharing these resources with your school community.

The rest of the playbooks

Duckworth, A. (2016). Grit: The Power of Passion and Perseverance. Scribner.

Inspire picture and wall chart from the official IPEN photographs.
Other photos used courtesy of Soaringwords.org

George Vaillant on the REAL difference between happiness and joy

Invitation to a Virtual Panel to Recap Positive Education Conferences