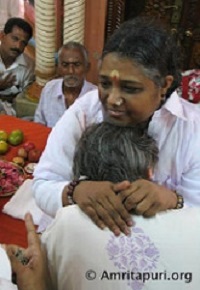 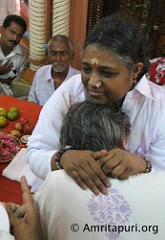 A few years ago, I embarked on a 250-mile road trip to meet Mata Amritanandamayi, affectionately known as Amma. She is a Hindu spiritual leader, revered as a saint by her followers. Amma’s name means “mother” in Hindi. There is nothing more maternal than a woman nestling a child in her arms, and Amma has amplified the simple, powerful, loving gesture of a hug to an astonishing level. According to the Amma.org website, to date Amma has hugged more than 34 million people.

Born in India in 1953, she was the third of seven children. Her father was a poor fisherman. From a young age, Amma was sent to gather food scraps from neighbors for the family’s cows and goats. Each day as she rummaged through trash, she was confronted with the intense poverty and suffering of others. After hearing a particularly dire story, she would bring the person food and clothing from her own home. When her family learned about her altruistic actions they scolded her.

At the same time, Amma began to spontaneously embrace people to comfort them in their sorrow. Her physical contact with other people, especially men, was considered unacceptable, and her parents insisted that she stop immediately. Instead, word of her kindness and wisdom spread rapidly through the region, and people started traveling great distances to her village to meet her. Often there would be dozens of people sleeping on the ground near her humble home waiting for a chance to speak to this fourteen-year-old girl.

“People used to come and tell me their troubles. They would cry and I would wipe their tears. When they fell weeping into my lap, I used to hug them. Then the next person wanted it too, and so the habit picked up,” she told a Rediff interviewer.

My Own Experience with Hugs

For many years, I have traveled around the country running Soaringwords’ programs for thousands of employee volunteers at end of sales meetings or corporate retreats. My Soaringwords talk is followed by a hands-on team-building activity doing something simple and kind to benefit ill children. Evaluations show that these are often the emotional highlight of the meeting because of the powerful feelings evoked.

Soaringwords programs often culminate in hospital visits with small employee delegations donating their Soaringwords projects to babies, children, and teens. After going room-to-room, reading the special messages and artwork on the quilts and pillows, we thank the children for allowing us the privilege of visiting. Then comes my favorite part, what makes me want to get up the next day and do it all again. As I leave the hospital room I always asked the child, teen, or family member:

There is a momentary pause that feels like everything is moving in slow motion. I wait. I have no expectations. Sometimes a person looks at me and says “No thanks.” I smile and say something like, “It’s been such a pleasure to meet you.”

Most of the time after I ask, the person pauses and starts to smile or nod silently. I take a step forward, waiting. When it’s the right time, the hug happens. Some of the hugs are immediate and strong. Other hugs are slow and tentative. A few seconds elapse, then come the tears. Tears of joy. Tears of release. Or just tears of being “seen.” 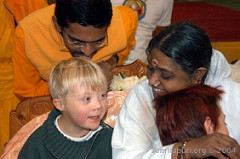 This is why I was compelled to drive for four hours to meet someone who had already hugged more than 34 million people. I knew that I would come away inspired. In Hinduism, darshan is the act of beholding a deity, divine person, sacred object or natural wonder, especially in a physical form. I was ready to see this paragon of loving kindness in person.

Dorothy, I think we’re not in Kansas Anymore

I set out with Greta, Soaringwords’ Community Relations Manager, to experience the power of Amma’s love and perhaps even receive a hug for ourselves. The road trip coincided with Greta’s birthday so we dubbed it a Soaringwords Adventure & Birthday Boondoggle. We knew we were far from New York City when we stopped at a gas station just a few miles from the retreat center. As we pulled in, we noticed a couple dressed like they were attending Woodstock, dancing and chanting on a well-worn patch of grass abutting the gas station.

When they saw us leaving our car to stretch our legs and use the facilities, the man approached us with a broad grin.

“Greetings holy sisters.” His eyes were joyful, his shoulders slightly drooping like a friendly basset hound.

“Well hello there, looks like you two are celebrating this beautiful day.”

“Indeed. Are you coming to meet Amma?”

“Wow, we are Amma virgins. It’s our first time.”

“You won’t be disappointed. It will change your life.” 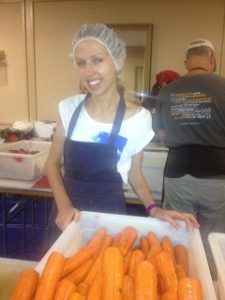 A few minutes later we pulled up to a large parking lot, a patch of dirt in front of a tired building that looked like it might have been a dance hall, bowling alley or warehouse decades earlier. Several greeters were on hand at the registration station which had hundreds of envelopes perched on a folding table. We received our room assignment, schedule of meditation sittings, and assigned duties. We had kitchen duty at 5:00 AM the next day. Greta and I peeled potatoes and chopped carrots for hundreds of people. It was meaningful to contribute, although Greta noted that it felt like being in an I Love Lucy episode as we tried to cut vegetables in precisely instructed shapes and sizes.

Our room was immaculate and wonderfully barren: two beds, a lopsided dresser, and a couple of pegs to hang our worldly possessions or wet towels. A single light bulb suspended from the ceiling by a bent wire illuminated the space between the beds. According to the printed program schedule, our days started at dawn and did not have an official end time. We realized that we were in for a whole lot of sitting in silence for hours at a stretch. We closed the door to our room and took a short hike prior to the opening session asanas, times to sit in meditation. 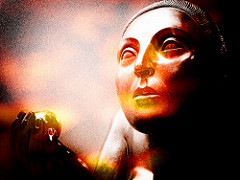 Amma reminded me of iconic portraits of Indian Goddesses like Radha, the life energy and goddess of kindness, or the Great Tara, the supreme creatrix and mother of all the Buddhas and Bodhisattvas. Amma looked like a grandmother, and also a little bit like a Botero sculpture. I immediately wanted to hug her.

Like many things that are authentic and true, eighteen hours later, when I had my chance, it was nothing like I had imagined, and it was wonderful. Greta and I each received a small orange ticket, with a number printed on it. At the appointed time, organizers invited people to start assembling in a line that wrapped around the circumference of the entire hall. As I walked up the stairs to the stage where Amma sat on a golden chair, we locked eyes. Her gaze was penetrating and soulful. I stared into her eyes, feeling in the presence of a holy person. I smiled softly as tears streamed down my face. Suddenly she leaned into my face and cupped her thick hand close to my ear creating a megaphone of flesh and bone. Then she started screaming directly into my ear: “Mother, Mother, Mother.” She kept screaming for about five minutes. I was reduced to tears feeling the pull of her love, my mother’s love, and the love I have for my children and all the children I have ever encountered through Soaringwords. My time was finished. I was gently lifted by two organizers, and the next person knelt down to meet Amma.

So don’t just sit there. Go find someone to hug!

January 21 is National Hug Day in the United States. Not an official holiday, National Hug Day was created by Reverend Kevin Zaborney because he perceived that many Americans were afraid to display affection in public. He chose this time of year because it’s often a low point for human contact between the December holidays and Valentine’s Day. But you do not need to wait for a special holiday to give a hug.

The Differences Among Mindfulness, Flow, and Hypnosis

I like hugging and being hugged. However, I’m afraid this will fall into the category of evidence-based principals.

Same as above. I like hugging and I like being hugged. However, I am afraid this will be considered science because it is kind of evidence-based.