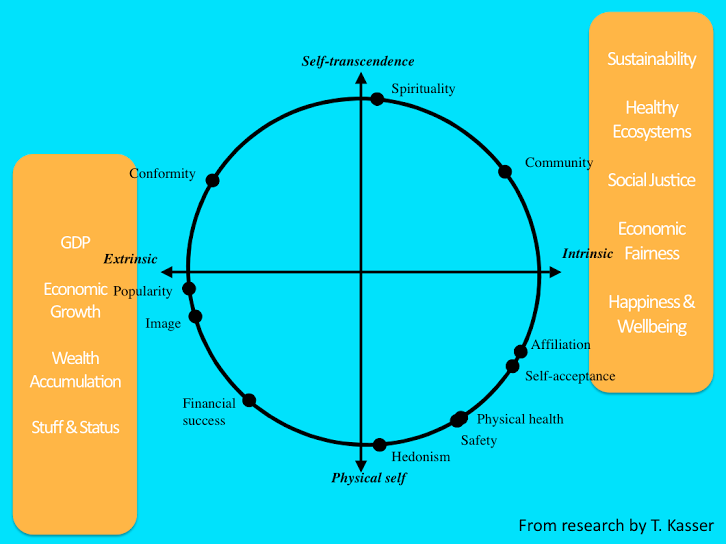 Laura Musikanski is executive director and cofounder of The Happiness Alliance home of the Happiness Initiative and Gross National Happiness Index. Prior to that she was the executive director of Sustainable Seattle. She believes passionately that you get what you measure, and that it's time to measure and manage for the well-being of people and the planet. Laura is the author of How to Account for Sustainability and Sustainability Decoded. She is a lawyer with an MBA and devoted grandmother to Bruno. Laura's articles are here.

The connection between positive psychology (for personal happiness) and the happiness movement (for an economy and society based on well-being, sustainability and happiness for all beings) seems simple and obvious. In reality it isn’t.

In the academic community, most researchers are focus on personal happiness or social change rather than the nexus of the two. In the political arena, most media punishes politicians who talk about the connections between personal well-being, sustainable development, economic equity, and societal well-being. So we are stuck with what I call the irresolvable dilemma of personal happiness and social change.

Well, it’s not actually that irresolvable. It’s more of a tension epidemic in most societies. Bhutan is an exception. There personal happiness is part of their national policy for Gross National Happiness (GNH). Alongside questions for general health, education, cultural knowledge, governmental performance, social services, and ecological health are very personal questions such as:

The GNH policy screening tool is used to rate policies. Alongside questions about equity, productivity, pollution, and other factors it asks:

With personal and national happiness data and policy screening tools, the next step in the process is promulgating policy and putting in place programs. As I recently described, promoting small- and medium-sized businesses, attracting sustainable foreign direct investment, and combining traditional with allopathic medicine in the national provision of care are a few examples of policies in Bhutan. Alejandro Adler, a former student of Martin Seligman, is working on a project that exemplifies the nexus between personal and national happiness. The Bhutanese government invited him and his colleague to develop a comprehensive course to develop mindfulness, compassion, creative and critical thinking, decision making, and problem solving to primary schools.

This is not to say Bhutan’s example is stellar. The injustices imparted on Nepalese refugees mentioned in the prior post in this series are shameful. However, Bhutan is bridging the divide between supporting personal happiness and holding a vision in which the world’s economies operate for the well-being, sustainability, and happiness of all beings.

Imagine that a politician or policy maker in the United States were talking about the importance of promulgating policies that increased people’s compassion and our ability to care for each other and the planet. Crazy thought?

Yet, there are ways to get there. One of them is through the use of metrics. Tim Kasser, a researcher featured in the movie Happy, found that when a society uses metrics for well-being, sustainability, and happiness, the cultural values change from valuing wealth, status, and hierarchy to valuing community, care for others, and self-acceptance.

Kasser’s findings on the connection between metrics and societal values
Click to see larger version.

This is the reason that one of the main facets of the happiness movement is the development of measurements to supersede merely monetary measures, like gross domestic product (the sum of all goods and services produced in a year), wealth, and profit. My work to spread the Gross National Happiness index is inspired by this vision.

Many international institutions are contributing to this effort by developing metrics and collecting data. For a list of institutions with a grid comparing areas of well-being and happiness measured, see Appendix B of Measuring Happiness.

One of the main facets of the positive psychology movement is the use of surveys. Metrics used by those in the happiness movement and by positive psychologists have certain psychometrics in common. The Cantril ladder, Huppert and So’s flourishing index, and Diener’s affect scale are some examples.

In a certain way, the foundation is already laid for bridging the divide between policy and personal happiness. But that does not mean that policy makers outside of Bhutan are able to design and build that bridge.

In the state of Vermont, a small not-for-profit, GNHUSA, conducted a radical experiment. They undertook a random sampling of Vermont State using the Gross National Happiness index. Working with the University of Vermont, they issued a report and then brought together policy makers, not-for-profit leaders, and socially responsible business owners for data laboratories. The data laboratories explored the obstacles and opportunities for using happiness data to shape policy and inform budgets. While this work is not widely known, it is vanguard. The work did not receive the support it needed to continue past the first effort in part because it was so vanguard.

Connecting personal happiness and societal change is both obvious and complex. For today’s political reality, it seems like an impossible and irresolvable dilemma. However, international organizations like the Organization for Economic Cooperation and Development (OECD) would beg to differ. Last week they held their 5th World Forum and called it Transforming Policy: Changing Lives. The focus was on a new economic paradigm. While most of the speakers at that forum were unable to give concrete examples of their vision, many small grassroots organizations like GNHUSA are bridging the divide by working to spread the happiness movement. For more examples of grassroots efforts like GNHUSA, visit the OECD’s Wikiprogress profile for happiness initiatives.

Alder, A. (2015). Gross national happiness and positive education in Bhutan.

Pictures provided by Laura Musikanski. The chart is Figure 1 on page 28 of the Crompton and Kasser paper.

Hi Laura,
I love your ideas. I am trying to help people engage in conversations that matter with the intention of spreading inspiration, optimism and resiliency while walking the Grace Trail. (www.gracetrail.com) It is really catching on and people are finally getting it and walking it. You can read more about the movement on the website. I am sending my best to you. Keep up the fight for happiness!
With gratitude and a smile,
Anne Jolles

Hello Laura, Wonderful article! I’ve been reading about Martin Seligman’s Positive Psychology theories. As I am sure you know, his original Authentic Happiness theory, which focused on the individual, has been upgraded to the Well-Being theory which includes the common good.

Another great article! I am very interested to see where this movement goes and if other countries may get involved. I’m not sure if every nation could run this way. Do you think so? Do the people in Bhutan still work or have factory-esque jobs to produce goods?