Kirsten Cronlund, MAPP 2008, is committed to helping others navigate the rough waters of divorce with resiliency, drawing upon personal experience and the science of positive psychology. She is now serving as the director of Bryn Athyn Church School. Full bio.

I am irrevocably changed by my divorce. For the better.

Don’t get me wrong – I am not an advocate of divorce as a way to bring about “happiness,” as it is typically defined in our culture. In fact, going through my divorce was like walking through fire and having the outer layer of my skin burned off. It was no quick fix, and it hurt like the dickens. I am, however, acutely aware that the positive changes I made in my life in order to weather the ordeal brought me to new levels of peace, joy, and openness that are still with me — two years after my divorce was finalized. My experience is an illustration of growth and flourishing, even in the face of difficult circumstances. Some researchers would call this posttraumatic growth, and some would call it resiliency. My grandmother would call it making lemonade out of lemons.

I see it as an upward spiral, where each right decision I stumbled upon led to the next. Mostly I was just trying to get through the day, often through paying close attention to what was working – and what wasn’t. While I didn’t know anything about positive psychology at the time of my divorce, in retrospect I can point to research that supports all of the behaviors that I relied on. 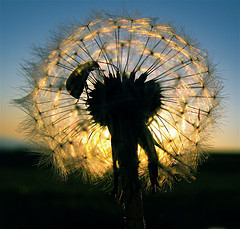 For example, I grew up thinking that hope was kind of pointless. “I hope it doesn’t rain for the picnic tomorrow” felt like a wish, similar to blowing dandelion seedlings, as opposed to a powerful plan of action. And when my best friend suggested naming her daughter Hope, I had to bite my tongue. Today I have a new respect for hope, as it has been redefined for me by the positive psychology community, and I now see it as the first critical ingredient in moving forward through divorce.

Hope is defined by Shane Lopez and colleagues as a psychological construct in which the hopeful person feels that he or she is: 1) capable of coming up with a change goal, 2) able to set up a plan for achieving these goals, and 3) able to sustain the motivation for carrying out the plan. This is a very different picture from the dandelion-blowing individual above. In fact, this definition of hope also requires self-efficacy, defined by psychologists Albert Bandura and James Maddux as the belief in one’s own capability to be successful in any given area. Combine hope and self-efficacy, and you have a person who not only believes that he or she is capable of bringing about change, but who also can conceptualize that change and bring it into reality through conscious planning.

Our dandelion friend, then, was using a different definition of the word hope than what I am talking about here. Positive psychology’s definition of hope would have no place in a conversation about the rain and the picnic… Or would it?

During one MAPP class this year, my classmates and I were honored to listen to Dr. Chris Feudtner speak. He is a pediatric palliative care MD at the Children’s Hospital of Philadelphia (CHOP), which means that he works with children who are dying from fatal illness. His wise words were burned into my heart as he described the conversations he has with the families of his patients. He said that he begins by empathizing with their agony, and then he poses this question to them: “What are you hoping for?” He said that sometimes parents will respond at first that they are hoping for a cure – a miracle – but that when he allows them the time they need, they usually end up stating that their hope is for their child to be pain-free at death, surrounded by loved ones, or something of a similar vein. When these parents redefine what they are hoping for, suddenly they are in a position to take action. What is necessary to access hope, then, states Dr. Feudtner, is to change the question.

So what about the person who is hoping that it won’t rain for the picnic? That is not the kind of hope that Lopez and colleagues meant, and it doesn’t tap into any sense of self-efficacy that the person might have. If we apply Dr. Feudtner’s approach, though, and change the question to “how would I most enjoy my time with friends whatever the weather?” the outcome of the upcoming picnic is suddenly at least partially within our friend’s control.

In divorce, then, the same dynamic applies. It’s so easy to get stuck in questions such as: How did this happen? How can I protect myself? And when is it all going to end? But by changing the question to “What am I hoping for?” we eventually come to this empowering question: “What’s possible here?” and “What can I do to bring this about?” This is the kind of hope that Lopez and colleagues meant, and which builds upon self-efficacy. Some realities of divorce are outside the control of the individual. Grieving is necessary, and often anger is appropriate. But in order to emerge a better person, rather than a bitter person, the first step is to access hope by changing the question.

Enjoyed this piece very much. Interestingly when I was in MAPP 2 the very same comments by Chris stuck with me and I have repeated that story of his experience to many many people who think there situation is “hopeless” in the traditional sense.

I find the lemonade from lemons metaphor useful and poetic. Great article. In fact, I’m announcing my divorce to “the wife” tonight!

With dissatisfied groups, discussions often start with negative litanies about all the things that are wrong. I’ve found it’s important to acknowledge that negative things exist. Once people see that I’m not trying to make them deny the things that worry and anger them, they are more open to brainstorming interpretations that allow them to feel in control rather than helpless and angry.

Thank you for reminding me of Dr. Feudtner’s work and his question. It’s a powerful and direct way to help people with the shift from helplessness to hope.

Thanks so much, all, for your feedback on my article. Yes, the power in acknowledging what IS — before moving on to solutions and problem-solving — can transform a combative situation into an opportunity for collaboration and true peace. Dr. Feudtner is a great concrete example of this in his work.

Jeff, I trust you’re joking about your conversation with “the wife”! 🙂 I’m glad lemonade out of lemons helped make my ideas stick for you. My sister-in-law actually told me during my divorce process that that’s what she saw me doing. It was an aha! at the time and it felt good.

Keep up the great conversations. This is an important topic.

As Kathryn B. has said in not so many words, memorable stories make ideas sticky.

If you think about mnemonic devices as short stories, this makes sense. In fact, some of the cognitive psych/brain literature I’ve been reading suggests that the simulatory nature of stories is very similar to imagery. Imagery as a memory technique is probably pre-historical and has empirical studies supporting its effectiveness.

I guess that was a long-winded way of saying, more anecdotes/case studies/vignettes/etc. They are key to stickiness for me. I’ve had a few lemons lately and I’d enjoy a cool cup of lemonade.

I empathize with the lemons in your life lately — whatever that looks like. My hope for you is that by asking yourself the right questions you’ll be able to access possibility within your situations.

I want to thank you for highlighting the power of the story — even as simple as lemonade from lemons. You have inspired me to really roll around in the richness of that metaphor as it relates to divorce. Watch for the continuation of that thread throughout my future articles on this topic!

I end with this question for you and for all other readers: What is possible for today?

That’s a question that can only be answered backwards. The answer is: “What did I do today?” and the follow-up
“What can I do with tomorrow?”

I think Florida online divorce process is quickest of all to decrease the amount of bitterness.

I want to thank you for your support of the lemonade from lemons concept. You inspired the theme for my new website, just live now: http://www.lemonadedivorcecoach.com

Hope things are well with you,
Kirsten

Things are crazy-busy! I just started teaching Special Education at a local high school. The paperwork is mind-boggling. I suspect I’ll have excellent job security because Nobody wants to do my job.

I’m bench pressing 120lbs with my strengths at work these days.

When I get a moment, I’ll pop in at your site.

Please do, Jeff. I’d love your take on it.

Hope things settle down into a rhythm soon. I know how teaching can be. It’s incredibly meaningful, but really stressful at times, too.