Home All Raising the Sun: Ritual and Emotion
AllPositive EmotionSpirituality

Raising the Sun: Ritual and Emotion 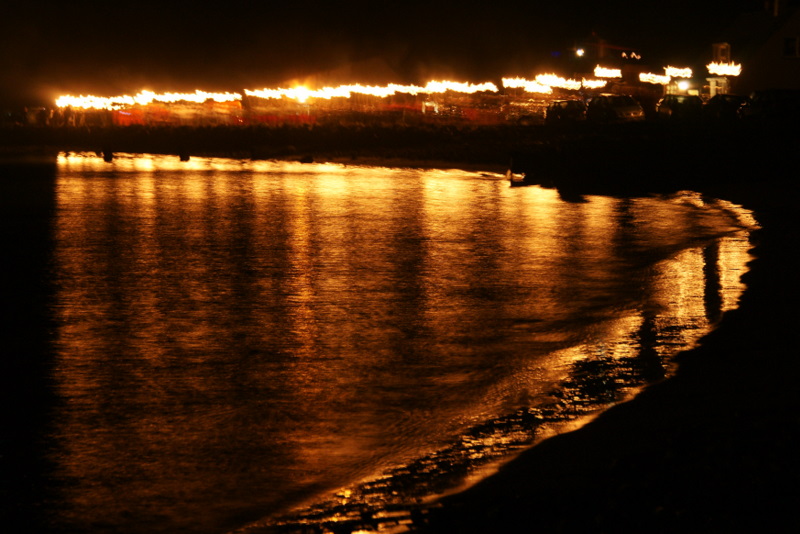 Kevin Simmons, teaches English, Social Studies, and Military Science at the high school level. He has nurtured a deep interest in many areas of science and philosophy by listening to audiobooks on his long commute, reading books from the public library, and either fascinating or annoying his wife with explanations of the most intriguing ideas he encounters.

“Death: HUMANS NEED FANTASY TO BE HUMAN. TO BE THE PLACE WHERE FALLING ANGELS MEET RISING APES.” All interspersed quotations are from Terry Pratchett’s novel, Hogfather 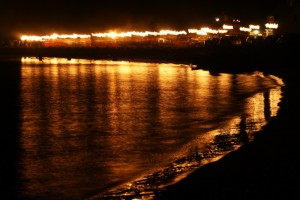 Cain killed Abel. The story is well known: Both brothers offered sacrifices to their god. Abel saw this as an opportunity for worship and gave his prized lamb. Cain saw only a waste of his hard work, giving rotten eggs and tomatoes. The meaningful offering was accepted, the hollow one rejected, and the rest of the story is legendary.

This tale sheds light on many things, but I would like to turn that light towards the nature of rituals: their impact is contingent upon attitude and belief. When a ritual is accepted and experienced as meaningful it produces joy and fulfillment, but when it is viewed as hollow or burdensome it breeds contempt.

George Vaillant briefly discusses ritual in Spiritual Evolution. He suggests that religions have value because they promote rituals that reliably create positive emotions through spirituality and mystical experience. Jonathan Haidt also addresses rituals in his writings. In The Happiness Hypothesis, Haidt asserts that these acts require symbolism and tradition to be meaningful, and they can serve to bond people together within communities. Both Vaillant and Haidt acknowledge an ancient truth: meaningful rituals reliably produce positive emotions.

While this statement is true in both the empirical and historical sense, it is a dangerous one linguistically. Ritual is a loaded and layered word. Eating dinner with family; kissing at a New Year’s party; holding hands to pray; burning the dead on a pyre; sacrificing to a god… all can be ritualistic. The benefit lies less in the act itself than in context and intention.

Death: STARS EXPLODE, WORLDS COLLIDE, THERE’S HARDLY ANYWHERE IN THE UNIVERSE WHERE HUMANS CAN LIVE WITHOUT BEING FROZEN OR FRIED, AND YET YOU BELIEVE THAT A BED IS A NORMAL THING. 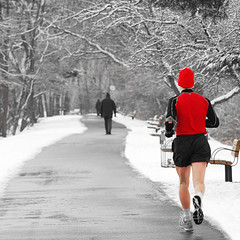 Jogging in the park

I want to consider the context of rituals for a moment. Imagine you are jogging. You have decided to take all the research with rats seriously: enriched environments build better brains, with the room to run and exercise being of vital importance. So you have donned your cross-trainers and sweatbands, and headed out to your favorite running route in hopes of turning this exercise program into a lasting ritual. Imagine that route more fully… I have a hunch that most people imagine themselves jogging in a place filled with natural beauty. It may be down a trail through a park, along a sandy beach, or through a nicely landscaped neighborhood, but it probably is not the back allies or busy streets that most would choose for their favorite running routes.

This idea is encapsulated in the biophilia hypothesis: humans are hardwired to connect with nature and other living systems. Ecopsychology has arisen recently to study and propagate the implications of this idea. Proponents of this and related fields of study have criticized the positive psychology movement for the lack of a framework to consider the contextual factors of well-being. A variety of research has shown that situations and environments matter a great deal in the development of emotions. Research by Richard Ryan and others has indicated that natural surroundings are effective at producing positive emotions, restoring health, and building character. Richard Louv discusses these findings fully in The Nature Principle, encouraging people in our technologically obsessed society to connect purposefully with nature on a spiritual and physical level in order to lead to more fulfilling lives and create a more desirable world.

Death: IT IS THE MOST AMAZING TALENT… A VERY SPECIAL KIND OF STUPIDITY. YOU THINK THAT THE WHOLE UNIVERSE IS INSIDE YOUR HEADS. 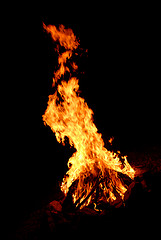 Consider this ritual: In the olden days, huge bonfires lit up the hilltops during the seasonal festivals. The entire tribe would gather to appreciate the rhythms of nature, and to ensure another year of prosperity. These events were intended to be celebrations of life, community, and the cosmos. But even in then, every person had a choice: hollow party or meaningful ritual. I am sure that many Cains stood around the fire with their drinking horns in hand, completely failing to understand the meaning behind the tradition, while the Abels in attendance stared into the flames, believing their participation necessary to keep the sun rising.

Times have changed. We are not even allowed to light those fires without permits, and would probably not even know the date to celebrate anyhow. So the solstices and equinoxes go by largely unnoticed in modern society. Robert Heinberg wrote, in Celebrate the Solstice, “The recovery of the ancient seasonal festivals is more than a symbolic gesture. It can be a meaningful way of reminding ourselves of the natural order of things.” Consider that you are standing on a madly spinning ball orbiting a fiery sphere circling a giant hole; the rhythms of nature and cycles of life are still there, waiting for the believers to fill them with meaning again.

“Death: NO… THE SUN WOULD NOT HAVE RISEN… A MERE BALL OF FLAMING GAS WOULD HAVE ILLUMINATED THE WORLD.”

Your last sentence is a beautiful bit of poetry:

“We are standing on a madly spinning ball
orbiting a fiery sphere
circling a giant hole;
the rhythms of nature and cycles of life are still there,
waiting for the believers to fill them with meaning again.”

Thank you for the compliment, Ben; looking at it in that light, I’d like to offer a slight revision:

We live here on this
madly spinning ball, orbiting a
fiery sphere, circling a
singularity.
The rhythms of nature and
the cycles of life are
all around,
Waiting for believers
to fill them full of
meaning again.
Again…again.

I would like to mention two additional resources relating to the context of well-being.

There is a chapter on the restorative effect of Mother Nature in Kathryn Britton and Marie-Josee Shaar’s book “Smarts and Stamina,” which has a book review on this site.

Also, the last post by Jeremy McCarthy discusses aspects of the context of well-being and decisions that is often take for granted.

Thanks Kevin, wonderful article. This is just beautiful and enjoyable to read, so much so that I would have loved it even if it didn’t say anything. And yet it does say something very important. Too often in psychology circles, people ignore anything that hasn’t been done in a randomized controlled trial experiment, forgetting that humans also learn by sharing their experiences, stories and rituals. Karen Armstrong talks a lot about the importance of using both logos and mythos to understand our world and the unfortunate suppression of mythos in modern times. If you haven’t already, you should check out some of her work. You might also enjoy another article I wrote on my blog on the health benefits of Forest Bathing (immersion in nature). This article seemed to really resonate with people and I think there will be a growing need to think about how we connect with nature in an increasingly urbanized world. Here’s the link: http://psychologyofwellbeing.com/201112/forest-bathing.html

I hadn’t heard of Karen Armstrong, but am now three chapters into “12 Steps to a Compassionate Life” with “The History of God” and “A Short History of Myth” on my reading list. Thanks for the recommendation. Thanks also for referring me to your blog post about “Forest Bathing”; I’m teaching World Geography for the first time and have been immersing myself in Ecology and Geography in order to develop worthwhile lessons – the class will definitely hear about the power of nature to heal the mind and calm the soul.

The more I delve into the world of well-being within psychology, the more I have come to realize that many of the newer and fringe fields within it hold pieces to the puzzle (with schools of thought from the humanities holding other equally important pieces). I am finding that environmental, eco, narrative, and transpersonal psychology all resonate well with positive psychology.

PS I found Terry Pratchett through my fondness of Douglas Adams. He develops humorous plots and characters as Adams does, but emphasizes humanity over absurdity. “Hogfather” is one of my favorite Discworld novels. I would also recommend “Small Gods”, which also has themes relating to the power of belief.

Kevin, thank you for a lovely article.

I like that you reinforce “meaningful rituals”, which require a deeper involvement than the mindless rituals that can become soul-less and unthinking.

Jenny Fox Eades (a friend and colleague from the UK; we studied Positive Psychology together in 2004/05) has a strengths-based program for schools called “Celebrating Strengths, into which she embeds the notion of festivals, celebration, storytelling and mindful rituals. Bringing community celebration into the students’ and teachers’ year has helped create flourishing. Your article reminds us of why working in this way is powerful.

Sorry, but I cannot resist adding one more line to you poetic expression:
We live here on this
madly spinning ball, orbiting a
fiery sphere, circling a
singularity.
The rhythms of nature and
the cycles of life are
all around,
Waiting for believers
to fill them full of
meaning again.
Again…again
Let the good times roll!

Ben, I like how the line ties back in to the spinning and circling.

Amanda, I’m going to take a look into that program. I have a hunch that community, ritual, and storytelling are inextricably linked and would make for a powerful positive intervention in our “postmodern” societies.