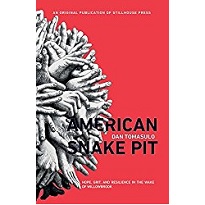 Daniel Tomasulo is a master story teller. He is also a man with an important purpose.

In his new book released TODAY (May 1, 2018), American Snake Pit, the purpose is to open the eyes of his readers to the humanity of people with intellectual and psychiatric disabilities. I think reading this book can make our moral circles a little bit larger.

As he points out in his preface:

What I learned from [Richie] and from the people I have worked with is that, in spite of enormous intellectual and psychiatric disabilities, these individuals are not very different from you and me. They crave love; need affection, compassion, and kindness; get hurt when they feel left out; are in need of guidance; want meaningful relationships; get angry when they are betrayed or can’t get their needs met; and are generally as confused and uncertain about their course in life as the rest of us.

This book is a story of a real adventure, the establishment of a group home for people who had previously been warehoused in the institutional setting described by Robert F. Kennedy after a surprise visit,

“I think that particularly at Willowbrook, we have a situation that borders on a snake pit… living in filth and dirt, their clothing in rags, in rooms less comfortable and cheerful than the cages in which we put animals in a zoo.” 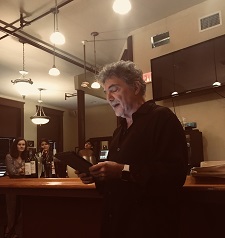 Dan reading aloud from his book

Following Kennedy’s visit and a news series by Geraldo Rivera, mental health treatment started being considered a civil right, but the transition away from mass institutionalization was neither easy nor smooth. Just releasing people from the institutions didn’t work. Homelessness, joblessness, and crime all went up. They needed places to go. By 1979, the easiest people to place in viable community homes and training programs had already been moved out years earlier. The people remaining needed many services to function outside the hospital.

Enter Tomasulo, in the last year of his doctoral program in psychology. He was flat broke and looking for a job. To hold body and soul together, he applied to manage one of the new group homes, Walden House, just being set up in small town. He got the job probably because of his answer to a question in the group interview:

“What if you found two residents kissing in one of their bedrooms?”
“If it was clear that neither of them were being coerced, I’d apologize and close the door.”

The stories in this book are real, though names and locations are changed to protect privacy. We are invited along to experience the challenges and adventures of residents and employees of Walden House. 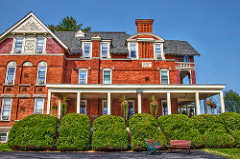 Group Home = Home with Group Living in It

In the stories, we get to know people with odd behaviors, and slowly learn why those odd behaviors make sense, given what people are able to do and what they experienced before. Getting to know Sophia, Candy, Mike, Albert, Harold, Taimi, and the rest of the characters on the pages of this book has been as beguiling as reading my favorite novels.

We learn about relationships that grow among the residents, among staff and residents, and among staff. From initial discomfort, I found myself starting to love these people, to feel pity for their pasts, and to care how their futures would unfold.

There are many, many challenges, enough that chapters often end with cliff-hangers. Will they find enough people to staff the house? Can they get someone with catatonia to eat? What to do with someone who can’t speak and gets incredibly frustrated – and violent – when she can’t make herself understood? What happens when Benny keeps trying to see his father, especially after hearing the words, “Well, Benny, your father is in heaven now,” from the parish priest?

Then there’s the fire drill test. The mayor, a dead ringer for Danny DeVito in Taxi, doesn’t want this kind of house in his community. He colludes with his brother-in-law, the fire chief, to declare that Walden House must show they can get everybody out of the building in two minutes, or it closes down. Will they pass the fire drill? Then what happens when a real fire occurs? 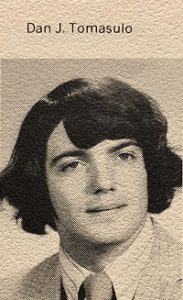 Dan, closer to the time of the story

Tomasulo knows how to tell a story. For a sample, check out an earlier version of the Hot Dogs chapter, which we published here and included in the chapter on Perspective in Character Strengths Matter. He laces his observations with humor, and he helps us see heroes in unexpected places.

After reading this book, you’ll face the world a little bit differently. If you’re walking down the street and feel your eyes start to slide away from someone that looks a bit weird, maybe you’ll remember to think, “He’s human too.” Maybe your eyes will connect.

Note: Daniel Tomasulo went on to become a New Jersey licensed counseling psychologist frequently working with people with combined intellectual and psychiatric disabilities. He co-authored the book, Healing Trauma: The Power of Group Treatment for People with Intellectual Disabilities. Besides studying positive psychology, he specializes in psychodrama. He is also very good at making people laugh.

The screen play of American Snake Pit has received over 20 awards at international film festivals since June 2017.

Laham, S. M. (2009). Expanding the moral circle: Inclusion and exclusion mindsets and the circle of moral regard. Journal of Experimental Social Psychology, 45(2), 25—253. Abstract.

Announcement: Webinar on Feedback and Change with Pete Berridge and Jen Ostrich – Wednesday, May 9 at 2pm ET