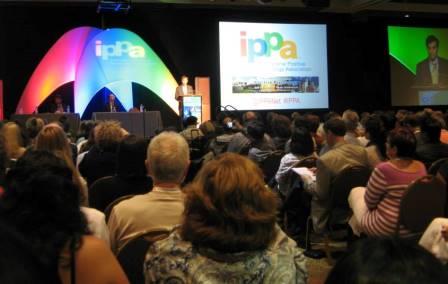 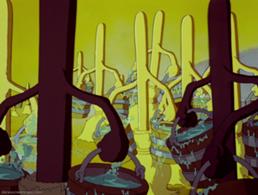 When I think back on the International Positive Psychology Association (IPPA) Third World Congress, held in Los Angeles from Thursday June 27 to Sunday June 30, I find myself wishing I could have been the broom in the Sorceror’s Apprentice: chopped into multiple pieces that regenerated themselves and moved independently. With up to 9 parallel sessions at any given time, there was much to miss in terms of workshops, symposia, posters, and people in the packed four days that I was there.

On the positive side, it was a busy, bustling time, a coming together of people from all over the world to swap information, make new connections, celebrate progress over the last 15 years, and spark ideas for further progress.

Let’s start with the numbers:

1200 people came to the 3rd World Congress from 54 countries. Events started on Thursday evening with a special lecture by Martin Seligman and Roy Baumeister. From Thursday through Sunday afternoon, participants had the opportunity 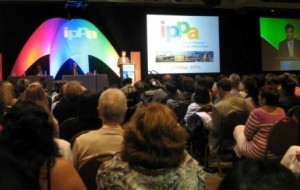 Since I couldn’t split myself like the Sorceror’s Apprentice brooms, I experienced Barry Schwartz’s paradox of choice for practically every moment of the weekend. Fortunately the combined exuberance and the joy of meeting new people and reuniting with old friends counterbalanced the pain of so many lost opportunities. But I still wish I had seized the chance to meet some of the researchers I’ve cited over the years, people like Ed Powley who spoke on organizational healing and Bob Emmons who spoke on the moral architecture of gratitude.

In this article, I’ll give brief summaries of the opening plenary presentations. I’ll return with high points from my experience and the experience of other PPND authors who attended the conference. 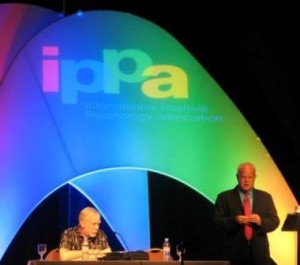 Martin Seligman speculated that focusing primarily on what happened in the past may be an even bigger omission in psychology than the tendency to focus on the bad things to the exclusion of the good. In fact, the reason that psychology neglected the positive may be because people weren’t thinking enough about the future. Intelligence is not what you know, but how well you simulate the future and act on your predictions. The human edge over other species is our evolved ability to predict the future. In his view, this idea makes many ideas that were opaque before start to become clear. Rather than thinking of people as prisoners of the past, he envisions a new field of study that focuses on imagination and getting better at moving into the future.

Roy Baumeister stated that the future can become involved in creating the present. We have much mental architecture aimed at the future. The same circuits that are involved in replaying the past help us simulate the future. This view makes things that seem like weaknesses about memory, that it is flexible and changes over time, appear to be strengths when viewing memory as instrumental for prospecting the future. Experience sampling shows that happiness is highest with present thinking, while meaning is highest with future thinking. Big questions about the future, such as what makes it real and what constitutes pragmatic prospection, will keep psychologists busy for years to come. 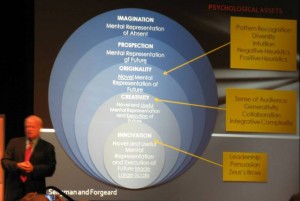 Seligman finished the Thursday lecture with a discussion of creativity as people age, presenting a map of creativity from work with Marie Forgeard. As people get older, the conduction speed of their brains gets slower and stamina goes down. But many other aspects of creativity, including the ability to see patterns, positive and negative heuristics, sense of audience, and breadth of exposure to different ideas all go up. He has asked several people, including Aaron Beck in his 90’s, “When in your life were you most creative?” The answer he usually receives is, “Right now.” Perhaps they are right. Rather than being one in a million on one thing, many creative people are one in 100 on several things with a multiplicative effect. The separate elements of creativity, when broken apart, can be learned.

Seligman then stated that strong funding is becoming available for people to study prospection and imagination, including ways to measure, augment, apply them. The goal is to make the world a more imaginative place. Requests for proposals will come out in 2013 and 2014. 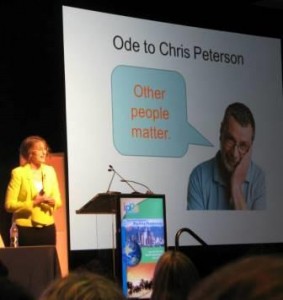 “Other People Matter” – How and Why? by Barbara Fredrickson

Barbara Fredrickson dedicated her Friday morning plenary to Chris Peterson, whose summary of positive psychology, “Other people matter,” has helped her conclude that there is one positive emotion that stands out above the rest: love. Love is a deeply physical emotion, felt in the heart, the immune system, and the blood. Positive emotions unlock the ability to focus on other people, making connections to others more salient. People get better at seeing what others see, and divisions tend to fade.

Fredrickson described her definition of love as a mashup of relationship science and emotion science. According to relationship science, love is an investment in others for their own sake along with a return sense being seen, validated, and cared for.

Fredrickson described love as a positivity resonance, a mini-mind meld, a single act performed by two brains in synchrony. Love is facilitated by sensory connections, including smiles and voice, and leads to real-time behavioral, hormonal, and neural synchrony. Love can be a microment shared with a grocery store clerk, as well as an experience with a loving partner.

Research indicates that cumulating micromoments of love are associated with higher vagal tone, with the heart rate slowing down with in-breaths and speeding up with out-breaths. Higher vagal tone is associated with better attention, better emotional regulation, better social skills, better heart regulation, and better immune function. As she described micromoments of connection to others as little tune-ups to vagal tone, she concluded that love is a vital health behavior. She also pointed people to the Positivity Resonance Web site for guided meditations that can help them increase micro-moments of love for themselves and others.

“Love doesn’t sit there like a stone. Each day it is made anew like bread” ~Ursula LeGuin

IPPA Third World Congress started with fresh views of both the future and love.

For more on prospection and increasing our focus on future, see an interview of Martin Seligman or watch the Youtube video embedded below:

Fredrickson, B. L. (upcoming). LOVE 2.0: THE MASTER CLASS: Helping Clients Create Happiness and Health in Moments of Connection Through the Science of Positive Emotions. Class sponsored by Mentorcoach. Begins Sept 24, 2013.

Kathryn – Go vagal tone. Looks like I’m about 15 years ahead of positive psychology.

Thanks for the great overview and summary of some key presentations Kathryn. Very helpful reminders of what I learned there.

It was wonderful to meet you in person at the event! 🙂
–Scott
Scott Crabtree, Chief Happiness Officer, http://www.HappyBrainScience.com

Super summary. I closed my eyes and pretended I was there. Thanks for making IPPA’d Third conference come alive, Kathryn. Loved the video of Marty here and Barbara Fredrickson’s tribute to beloved Chris Peterson. Many thanks.

Thanks for the overview Kathryn – and I’m glad you found some pictures to use! 🙂 I still have to go through my notes, but I have very fond memories of the event. Wish it could have gone on forever – the learning and community were fantastic!

thank you so much for writing and posting this great summary!
I feel privileged to have a further insight into what it was like. cheers

Supported by a grant from the John Templeton Foundation, the University
of Pennsylvania Positive Psychology Center has established the Templeton
Science of Prospection Awards to advance research the scientific
understanding of prospection, or the mental representation of possible
futures.

Up to fifteen (15), 22- to 24-month grants averaging $150,000 will be
awarded to researchers worldwide who hold the Ph.D. or equivalent, are
at the rank of Assistant, Associate, or Full Professor, and have
maintained their own independent laboratory for no more than 12 years.

Research topics of interest include, but are not limited to,
explorations of the following domains of prospection: Measurement,
Mechanisms, Applications, Improvement, ‘Open’

To Apply: Interested applicants should submit a Letter of Intent and a
Curriculum Vita by January 1, 2014. The official Request for Proposals
and application details for this opportunity can be found on the
Prospective Psychology website.