Applying the Science of Positive Psychology to Improve Society: Morning

Last Saturday, 24 January 2009, Claremont Graduate University hosted a conference titled Applying the Science of Positive Psychology to Improve Society.  The moderator, Stewart Donaldson, Dean and Professor of Psychology at Claremont Graduate University, opened the day with a history of the event. While the original plans were to get 50 to 100 people together, early signs of interest prompted CGU to reserve a 625-person auditorium.  The auditorium became completely sold out, and CGU additionally organized a webcast with 150 participants. Participants were from USA, New Zealand, Estonia, Finland, Mexico, China, UK, Scotland, Australia, and other countries. Donaldson posed two questions: What works in positive social sciences? How can we influence social change for the betterment of society?

This article reports on the events of the morning, foundations of positive psychology. The afternoon summaries cover applications — first related to schools, health, and mentoring and then related to business and organizational life. Videotapes of the conference are also available.

Martin Seligman gave a brief prerecorded address discussing the past, present, and future of positive psychology, including his vision of positive physical health, positive neuroscience, positive social sciences such as economics and political science, and positive education.

Connie Rath presented the Clifton Strengths Prize to Mihaly Csikszentmihalyi in honor of his persistent study of flow, especially its application to adolescent education.
Ed Diener presented Happiness and Complete Wealth: Implications for Public Policy. He discussed well-being as a societal goal and why we need measures of well-being to shape public policy in addition to existing economic measures. Societies attend to what is measured. He showed the Robert Kennedy quotation about what the GDP does and does not measure — you can hear Bobby Kennedy giving that speech here. There is a two-way relationship between well-being and public policies that affect the environment, health, and work. For example, people make better decisions in green spaces, and reducing air pollution makes life satisfaction measures go up. He cited progress in his talks with various organizations about measuring well-being — the Organisation for Economic Cooperation and Development (OECD), the European Union, the US Center for Disease Control, Stats Canada, and the UN, which may adopt some of the Gallup measures. Here are some of his answers to the most common questions asked by skeptics, especially economists:

Barbara Fredrickson’s talk was titled Using Positive Emotions to Enhance Human Flourishing. She reviewed research supporting her Broaden and Build and Undoing Theories. She commented that flourishing goes way beyond happiness — flourishing people add value to the world and bounce back more readily when faced with difficulties. She commented that changing emotional habits takes as much effort for prolonged periods as losing weight. Positivity transforms us, but it is not a matter of forcing ourselves to be positive by denying negative thoughts. Sincerity matters. She closed with an injunction to be open, appreciative, curious, kind, and real.

Nansook Park and Chris Peterson, who conducted a dialogue about Why Character Matters started with the celebration that Obama’s inaugural speech mentioned virtue and character strengths in practically every sentence. Character is personality morally evaluated. Their main points were that character strengths are 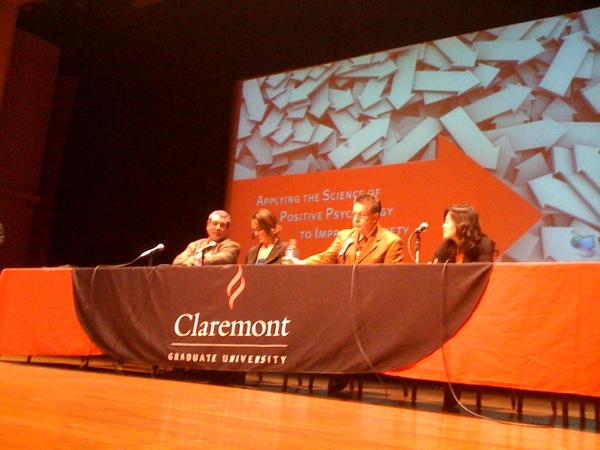 Finally, here are some of the highlights of the panel session where the morning speakers answered questions from both audiences:

For on-the-spot coverage by Senia Maymin, check out the log of her twitter tweets during the day.

“Bee-ing the Change” with Intention and Love

Applying the Science of Positive Psychology to Improve Society: Afternoon 1

This post was highlighted in the January 30 edition of Gratitude Watch.

Just received from CGU: “In response to overwhelming demand, the entire conference has been posted online at http://www.cgu.edu/positivepsych “

I attended this event as well and was delighted to meet some of the key players in positive psychology research.

Since retiring from community college teaching I became interested in writing a book on being happy. In the course of my research I discovered positive psychology and began reading the many books and articles in the field. At the conference I became aware that positive psychology is not just directed at individual well-being, but when applied to public policy could affect all parts of our lives from how buildings are designed to how we implement education, and even global peace.

I was encouraged and inspired by this conference, especially that it was held near me. Thanks for sharing your account of the day. I look forward to the next event.