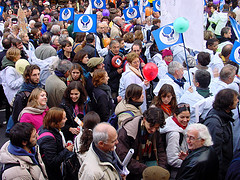 Are you passionate about a social cause such as environmental protection or civil rights? Are you looking for a way to have a positive impact on the world? Do you wonder what kinds of collective action have real, beneficial, and substantial impacts?

I’ve just returned from the Global Well-being Forum where I learned many fascinating things. Of all of them, the one that I can’t wait to pass on is Scott Sherman‘s research on social activism, as described in his dissertation, Strategies for Success in the Environmental Justice Movement.

Scott analyzed 60 case studies of activism against incinerators, toxic wastes, polluting industries, and other locally unwanted land uses (LULUs) occurring in neighborhoods already suffering disproportionately high rates of exposure to environmental hazards. In particular he analyzed the differences between cases where they failed and others where they succeeded. How? When? Why? Where? He explored 117 different variables, including some about the context (Was it a Democratic or Republican administration?), the nature of the opposing force (Was it a large company, a small company, a local government, state government, federal government?), how the group framed the mission, and what actions they took.

To be considered successful, an action had to meet at least one of the following criteria: It met its immediate goal, such as preventing local dumping of toxic wastes, or at least caused major concessions. It had unexpected positive outcomes, such as the Love Canal work resulting in changes to law. People involved continued with additional social activism.

Factors NOT Associated with Success

Here are some things that were not associated with success:

So what DID work??
Sherman names it Transformative Action and describes it as the intersection of nonviolent social action with positive psychology. Nonviolent social action we know about from Gandhi and Martin Luther King Jr.. Positive psychology, in this case, means turning the focus away from opposing the negative towards finding a positive win-win answer. This intersection involves 3 types of action:

For years I’ve been in a state of learned helplessness about social activism. Learned helplessness occurs when people have learned to believe that they have no control over a situation so whatever they do is futile. That makes them stay passive in the face of unpleasant or harmful situations, even when they actually do have the power to cause change. While I’ve heard Margaret Mead’s words, “Never doubt that a small group of thoughtful, committed citizens can change the world; indeed, it’s the only thing that ever has,” I’ve never really found them particularly empowering.

Scott Sherman’s talk inspired me. First, I was struck by the wisdom of studying what works in a disciplined, empirical way.  It honestly never occurred to me that this could be done.  Second, the answers make sense to me, based as they are on the positive psychology concepts that i have studied for more than 2 years. Third, I can now imagine successful social activism — I am emerging from the helplessness I learned from my own experience with social activism in earlier years.

Scott Sherman lives by what he learned. He and a partner have established the Transformative Action Institute and teach the principles of transformative action. For more information, see their publication, How David Conquers Goliath: The Power of the People to Overcome the World’s Largest Corporations and Governments.

OOOOOOOOOOOO! I really really enjoyed this piece, Kat. What a big difference you’ve made in my day. Thanks a million! PS Tell me more.

I’ve been corresponding with Scott Sherman about this article and his work:

Me: I attended your session at the Global Well-being Forum. It was honestly the most inspiring message that I heard — among many. Today is my day for writing the article on Positive Psychology News Daily so I wrote it about what I heard. I’d be very grateful if you’d look at my article, Social Action: What works? Anything that needs correcting? Or is there a comment you’d like to append to it?

I tried to include links to information for people who want to go further. However I found that the materials page on your Web site has a non-functional link (Click here for … –> takes you nowhere.)

Scott: That’s a terrific article! Thanks for the kind words. Honestly I think you’ve done a perfect job summarizing the main points. So there’s nothing that needs to be corrected.

I’ll have to contact my webmaster about the broken link, but this may take a while, because she has a lot of clients. So meanwhile it’s fine if you put my e-mail address in the article and send people my way if they want materials:  ssherman@transformativeaction.org

I’m a little intimidated by the idea of reading a 500 page dissertation, but I’d love to have examples of these actions — of telling the truth to power, social aikido, and vision of the future. For many of us, it is hard to imagine a mutually beneficial change, and imagination is where it all starts.

Have you ever seen Robert Wright’s book, Non-zero? He argues that history has involved moving from win-loss to win-win at larger and larger scales as the social organism becomes more and more complex. In fact existing win-loss situations often provide the propelling force toward win-wins. Many of us don’t see this ourselves because we take the existing win-wins for granted and we don’t see things at a scale that shows the movement to win-win. Marty Seligman told us that he thought this was a very important and compelling book — so you might find it useful in your teaching.

Scott: Please feel free to post my note. … I can sit down and write at greater length about some inspiring examples of transformative actions.

This link works, to purchase the dissertation.

Every time we say or write the words “non-violence,” we are using the word “violence.” The inadequacy of this term illustrates one of the big contributions of positive psychology: that the good is not equal to the absence of the bad. It is much more. For example, a good marriage is much more than the absence of the qualities that make a marriage bad.

Scott Sherman sent me a chapter from his dissertation that covers the theory of transformative action — not a perfect term, but reaching for something beyond “not the bad thing.” It includes this quotation.

Arun Gandhi, the grandson of the pioneer of these methods, explains:

The greatest challenge in promoting nonviolence is the English language and its limitations…. When my grandfather Mohandas Karamchand Gandhi developed his philosophy of nonviolence in South Africa and wanted an appropriate word to describe it, he could not find one…. He even offered a reward to anyone who could come up with a positive English word to describe what he had in mind. Alas, no one could. (Collopy 2000, 38)

Thanks for this article! I missed Scott’s talk in D.C.(which I am very sorry about now!), but you communicated his inspiring message loud and clear.

Friends,
I’ve continued this discussion in my blog. That involved pulling in Robert Wright’s book, Non-zero. Did you know there are excerpts of every chapter available on the Web? There is also a terrific video of Bill Clinton talking about Non-zero and its significance for the 21st century, a time of growing global interdependence. Check it out – http://theanocoaching.wordpress.com/2007/10/11/thoughts-about-social-activisim/.

Isaac Bashevis Singer said in his book, In my Father’s Court:

It is my firmest confiction that the court of the future will be based on the Beth Din, provided the world goes morally forward instead of backward. Though the Beth Din is rapidly disappearing, I believe it will be reinstated and evolve into a universal institution. The concept behind it is that there can be no justice without godliness, and the best judgment is one accepted by all the litigants with good will and trust in divine power. The opposite of the Beth Din are all institutions that employ force, whether of the right or of the left.

He defines Beth Din as an ancient institution that started whn Jethro counseled Moses to “provide out of all the people able men, such as fear God, men of truth, hating covetousness … and let them judge the people at all seasons.”

The book is a very interesting collection of stories about the court held by his father. My husband came across this book as part of the Western canon that he is working his way through. I am glad he shared it with me.

Kathryn,
Singer is my all-time favorite author of all time. That’s a great book. I like all his short story collections. Thanks,
S.

I am so grateful that Kathryn wrote about this topic! I am typing away right now at a law school paper and I am heavily citing Scott’s dissertation, as to why litigation is inadequate as a method of social activism, etc etc. I’m so happy to be able to include positive psychology in my legal studies.

Thanks for posting, Elizabeth. Why not think about sharing the paper with Scott Sherman when you are done? Or perhaps submit a precis as a guest article for this site?

I would love to share the paper (once the final copy is completed in December) with anyone who is interested. My discussion of Scott’s dissertation is only a part of the paper, but it still might be of interest to Positive Psychology folks.

I’m very interested in the potential intersection of Positive Psychology and social activism, so if you come across any further research, make sure to keep us posted!