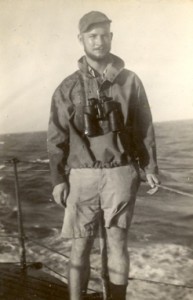 September 7 and 8, I attended the reunion of the World War II crew of the USS Bream, a submarine that made 6 patrols in the Pacific in 1944 and 1945. My father was on all 6 patrols as commissary officer and communications officer — partly because the galley where food was prepared was right by the equipment used for communications. I mentioned in my Memorial Day post that my father died when I was two, so through a series of events in search of stories about him, I got us invited to the reunion. It was a glorious weekend in Asheville, NC, staying in the very nice Grove Park Inn. The activities, which included a tour of Asheville and a trip to the Biltmore House, ended with a memorial service for all US submarines lost at sea and for the loss of all crew who are no longer alive. Each name was read aloud. At the end, a bell was rung 2 times, then 4 times, then 3 times to represent the Bream’s number 243.

Common experience on the Bream led to lifelong friendships that expanded to include wives and some of the children. The reunions started in 1982 — after the intense years of child-rearing were mostly over. In the intervening years, they’ve been held all over, including a return trip to Perth Australia, the Bream’s service port during the war.

There is a ship’s history about 9 pages long pulled together by several members of the crew. I have a copy with a cover letter written by one of the officers, ‘Red’ Hallinan, addressed “To the younger generation”. I was given permission to read the first paragraph out loud before the memorial service started:

This is a brief history of a fleet type submarine during World War II. It sounds exciting and it was. However with all this excitement, glamour, and adventure a lot of innocent people got killed. War is not an acceptable method of solving our problems. There has to be a better way.

I thought this reunion was particularly interesting because although started on the basis of shared experience in a time of great danger — the submarine’s history is full of depth charges and fires and landing people in enemy territory — it expanded to include the people who weren’t there. Stories told during the reunion included stories of the wives and sweethearts back home. For example, a nurse in Perth told how much she and her fellow nurses enjoyed visits by the subs because they got taken out to dinner — a nice break from their normal fare of rabbit or tripe in cream sauce.

The Law of the Garbage Truck™