Remembering the Extraordinary Life of an Ordinary Person 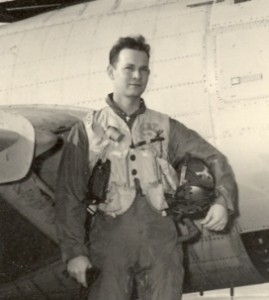 Today is Memorial Day in the United States. Memorial Day officially commemorates people who died in military service to their country. In many families, it is a day for remembering anyone who has died. Families go to graveyards to tend graves and leave flowers. People mentally run through rolls of friends and family who are no longer here, people they remember in gratitude. My father has no grave — the plane he was flying was lost in the Mediterranean. I also have few memories to be grateful for — he died when I was only two. But he did leave behind an example of realistic optimism, persistence, and humanity that I think had an ongoing effect on me. Let me tell you some of his story. Then I invite you to add stories of your own in the comments.

Louis Sugg was an officer on the Bream, a submarine in the Pacific, during WWII. After the war, he became a Navy pilot, telling his sister that he felt in the arms of God when he flew. In 1946, he applied to be a Rhodes Scholar from the state of Montana. He was not selected. Then he tried again in 1948, this time earning the three year scholarship to Merton College, Oxford. I was born in Oxford during his studies.

Here’s the opening to the essay he wrote for the second application:

“To add political proficiency to military experience; to become familiar with other peoples, their problems and philosophies; to understand the ideals and practical bases for international organization by study and observation, to combine past achievement with future effort in preparing for an active role with the police force of the United Nations” – this is my aim.

Here are some paragraphs from the middle where he expands his thinking:

Despite the necessity of spending much of my time in professional study, I have succeeded in developing a consciousness of liberal thought. I have learned a little about the political and philosophical developments of past centuries leading to man’s present social instincts and shortcomings. My interest in the relations and problems of peoples and states has grown, and the development of international intercourse, including the organization and functioning of the United Nations, continues to absorb me. I have endeavored to keep abreast of current events by way of news sources. From all this has developed the embryo of a political thought and the realization of the necessity of continuing to develop that thought at Oxford if I am successful in this quest, by other means if necessary.

At Oxford I should like to enter the Honor School of Philosophy, Politics, and Economics. … I consider the following fields worthy of consideration: contemporary world history; diplomacy and international law; the philosophies under which men live in the present age; geopolitics and economics. In particular I want to stress the study of the United Nations. I want to develop concrete and practical political theories. To do so I must understand humanity insofar as possible. I know of no preparation so ideally suited to my purpose as those opportunities available to me at Oxford.

Here is the close, where he defines his guiding ideal.

The Charter of the United Nations provides for the establishment of a military force whose components shall be contributed by the members. It is my belief that ultimately there will exist a “United Nations Police Force” organized by the UN and responsible only to that organization. Such a force can be a mechanical instrument of enforcement or it may be a vital guiding influence on the relations of peoples. This latter is my ideal, and a constructive role with this force is my ultimate aim. This is my justification for seeking a Rhodes scholarship.

I asked Chris Peterson, co-creator of the Values-in-Action character strengths, to look at the entire essay and tell me what it said to him. Chris had been doing content analysis of Medal of Honor materials, so I knew he was interested in such writings. He wrote back:

What shows through here very clearly is perseverance and a host of humanity strengths not exactly named in the VIA but captured by generativity and breadth of moral circle.

Unfortunately, he couldn’t resist an assignment after Oxford as a test pilot flying off the Coral Sea aircraft carrier. He and his plane were lost at the end of a very successful flight, right after he’d beaten the rest of the formation to a certain height. His last words were, “Bet you wish you had my plane, skipper!” I grieve his loss for myself, but I also grieve for the world’s loss of someone with that vision and that humility – someone who realized that we Americans don’t have the one right answer for the world and that we need to listen, observe, and learn.

How You Tell the Story of Your Life

The A.P.E. Method to Get Out of a Bad Mood

What a great tribute Kathryn, and thank you for sharing this with us. I guess Chris is right (as aye) but I am struck also by the clarity of values, the steadfastness of purpose that shines through (there is subtely there that is beyond grit).
What a tragic loss, to you and us all. A loss of his ideals, actions and love in life – wasted in war. He fought for and won a better world. We have his hope.

Thanks, Angus! I value your opinion highly.

My mother once gave me a book called Lost in the Victory about the children of people lost in war. Of course, some were lost in the defeat. It made me extrapolate from my own experience to the huge collateral human damage caused by war. My son once did a school project on the environmental impact of war, which was similarly eye-opening. It’s unbearable to think about so much wanton waste. Too bad we can’t go back to sticks and stones — or better yet, go forward to wiffle sticks and wiffle stones.

Very deep post, Kathryn, thank you! I’m glad you have your father’s application essay – it must feel wonderful to read his words.