On Making a Choice 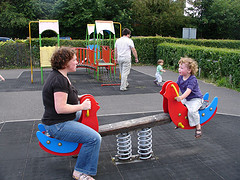 Do you spend a long time at a fork in the road deciding what to do? Or with the huge number of options we have today, are you on a roundabout in the road not sure which branch to take? When you do choose a branch, do you follow it with confidence or do you look back with regret?

What I’ve learned through observation, common sense, and experience about making choices lines up with research that Barry Schwartz describes so lucidly (and with such great cartoons) in The Paradox of Choice: Why More Is Less. See also Google tech talk about the book. If you find the following heuristics helpful, there are more in the final chapter titled What to do about choice.

Once you have made a choice, look forward not back. One turns a potential right choice into the right choice with thought, energy, and time. There were other possible right men in my life, but they aren’t the ones I’ve spent 26 years learning to appreciate. It’s the years of shared experience and mutual care that have made us THE right choices for each other.

How to Bake a Flow Cake

If anyone can figure out how to get blank lines between items in an ordered list, please let me know. I seem to like to number things.
Kathryn

Hi Kathryn, my favorite part of the Schwartz book was the last chapter – I highlighted a lot of parts of that chapter – “What to do about choice.” Also, I like your point 3 especially – this ties in with Dan Gilbert’s research about people not being able to predict their futures well. Best, S.

Master-Reality.ru website has reprinted this article in Russian.
Here it is:
http://www.master-reality.ru/main.php?script=news&action=shownews&id=30

Kathryn, I have an online friend named Laurence Haughton (www.laurencehaughton.com). He wrote a business book called “It’s not what you say it’s what you do”.

In it, he says that business success is determined more by the level of follow through on strategic decisions than on the decisions themselves. This sounds remarkably similar to your closing lines.

He wrote another book about speed in business called “It’s not the big that eat the small, it’s the fast that eat the slow”. In it, he claims that speed is the ultimate customer turn on. And the biggest lesson in speed is “Don’t obssess about perfection. Good enough is good enough.” Sounds like your intro doesn’t it?

Yes, I recognize the points — Persistence / Follow-through & “good enough” are good maxims for a lot of life. I’m just leary of making them the only ways to succeed — in business or anything else. They are heuristics, not laws. I guess this comes out of my gut reaction to “the fast eat the slow.” I immediately started trying to think of examples of slow and steady winning the race.

Thanks for commenting & making the connections. I’ll keep thinking about your point.
Kathryn