Strengths come from translating our values into behavior. While the science of positive psychology is relatively new, the strengths we act on are not. Focusing on strengths instead of weaknesses is also nothing new. It is founded in the timeless and enduring virtues that the Greek philosopher, Aristotle, spoke and wrote of nearly 2400 years ago. He claimed that a major purpose in life was to experience happiness through living a virtuous life. One way is to experience “excellence of activity.” When you know how to do something well and act on it, it can bring pleasure, engagement, and meaning. The more things you know how to do well, the more avenues you will have for enjoyment and flourishing. 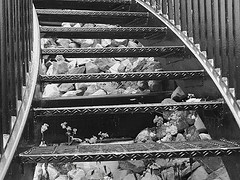 Developing strengths requires time and experience. The strengths we talk of are predicated on six virtues, including the four cardinal virtues of wisdom, courage, moderation, and justice. Aristotle claimed that a virtue or strength is developed through action: “Brave people became brave by doing brave things.” He said there were six states of character development: brutishness, self-indulgence, weakness of will or caving into temptation, strength of will or mastering temptation, character excellence, and heroic excellence.

According to this model, all humans are born brutish in nature, crying for food and attention, then moving through the other stages, hopefully leading to character excellence. Because of the eventual consequences of acting brutishly, most people learn that this behavior is not acceptable to others. Therefore, most people move up the “food chain” and eventually develop a sense of self-indulgence, a trait that is more common in young people and occasionally seen in adults. Those who act self-indulgently yield to their desires and are excessive and self-gratifying.

Self-indulgent people who have come to realize that this action doesn’t serve the good of others have taken a large step in the development of their characters. However, they may still be weak of will and succumb to temptation. Even though they still can’t change their behavior, they intellectually know how they should behave.

After struggling with temptation, a person may develop strength of will. Although a person may still have a desire to act in a certain way, he or she is no longer controlled by the impulse because, through experience, the behavior is known to be hurtful to self and others. The impulse may still be present, but the person chooses to act differently and is therefore in control.

A virtuous state of character is acquired through diligent ritual and rehearsal until the person eventually doesn’t feel the desire as much. Moderation or character excellence differs from mastering temptation in that it is built on accumulated practice from reflections on experiences and artful narratives. It also involves balanced and precise thought about short and long-term consequences, as well as clear goals, aspirations, hopes, and dreams. This person performs right actions as a matter of habit.

The highest possible character state is called heroic excellence, displayed in acts of great courage or self-sacrifice that go above and beyond the call of duty.

All of these stages are summarized in the figure below, shared by Dr. Steven Tigner. 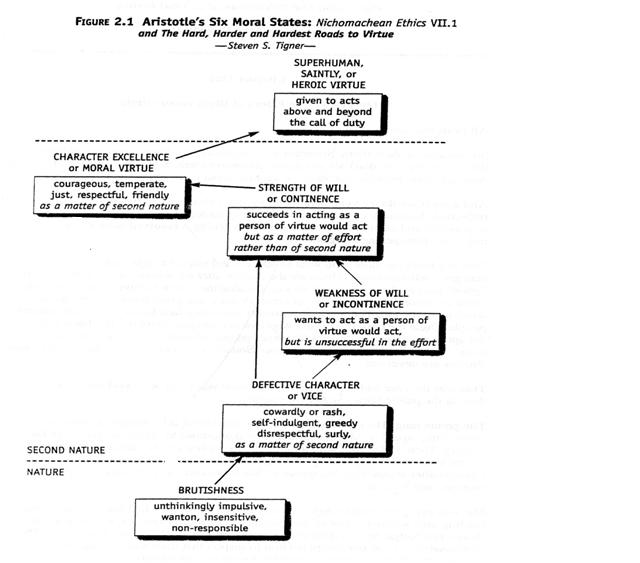 Note: You can substitute any behavior instead of the chips – sexuality and relationships, stress, drug-taking, nutrition, or fitness behavior. The “chips” are just a vehicle for understanding the process of self-regulation. 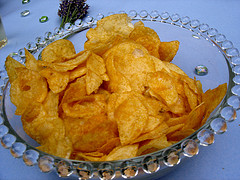 A Big Bowl of Potato Chips

Take 1 – Brutishness. I bring a bag of chips into class as a prop. First, I grab a handful of chips and start stuffing them into my mouth, with the same grace seen when my dog is given the dinner plate to clean off. The audience is at first taken aback by my behavior and clearly understand that it is pretty disgusting.

Take 2 – Self-indulgence. As I start eating the chips with a purpose, and savoring each delectable morsel, I start making the “yum” sound to the point of having a serious relationship with the chip. Don’t even think that I might share; the chips are for me, not you!

Take 3 – Weakness of Will. After a while I realize that I have had enough and begin to the put the bag down. My hand and arm begin to shake uncontrollably as I am trying not to cave into temptation, but my will isn’t strong enough. Ultimately another handful of chips goes into my mouth. When I then try to put the chips down, my hand goes back into the bag. I make a face because I am unhappy about my choice, but that is not enough to change.

Take 4 – Strength of Will. I eat from the bag again, and decide I have eaten enough. This is no easy task, as my hand and arm shake, but I eventually return the bag to the pantry. My will takes over, and knowing I shouldn’t eat any more, I act. Although I am exhausted from the struggle to master temptation, I am successful in the effort to self-regulate.

Take 5 – Character Excellence. I eat a moderate number of chips and put them down. I feel no desire to eat more, and I am not emotionally drawn to to the potato chip bag.

Take 6 – Heroic Excellence. No such thing as an heroic eating of chips. Have an apple instead!

We are fallible and imperfect beings who may have aspirations to attaining character excellence. However, there is another interesting way of looking at the journey to self-regulation that addresses the psychology of the environment, regardless of how virtuous a person might be. In next month’s article, you will see how being exposed to a “sweet smell” in a bakery may trump virtue in certain situations.

Becoming Unselved: The Mystery of Humility

John,
Your article reminds me of the old advertisement, “Betcha can’t eat just one.”

I love the idea of progressing from weak will (where you know what to do) to strong will (where you are able to do it but with effort) to character excellence (where you do it by habit). It’s useful to remember that what seems so hard today can become easier over time with practice.

Thanks for your kind words, Jeremy. The potato chip narrative really helps people to connect the dots, at least from an understanding perspective. Years ago, “Lays Potato Chips” had a slogan “Can’t eat just one” – a real challenge to self-regulation.

Kathryn: We are on the same wave-length of “Betcha Can’t eat just one” with my response post back to Jeremy.

Although I find your theory interesting, I wonder what applicability it has in the real world where people eat for emotional reasons that has very little to do with the development of one’s character.

I find your theory interesting, but when one is gobbling down potato chips, I hardly think anyone is thinking about character development.

Annette: Thanks for your comments. I do agree there are many factors going on that influence eating behavior – especially emotions and belief systems. The development of self-regulation habits is one tool in helping people regulate eating behavior. As mentioned in the “Chips” article, this coming month in Part 2, I will be addressing the influence of environment and mental processing as other factors in the big picture. Today, we realize that Aristotle’s notion of virtue needs to collaborate with social psychology, etc.

I checked your web-site and it looks like you are doing some great work with clients regarding emotions and belief systems!