I Think “Critically,” Therefore I Am: The 25th Strength

We all think, but may not think well. Critical thinking, however, is a reflective process that is clear, precise and purposeful.

“I cannot teach anybody anything, I can only make them think.” Socrates

The following definition of critical thinking comes from The Delphi Report on Critical Thinking, a qualitative research model produced by a panel of forty-six experts from philosophy, education, ocial sciences and physical sciences:

The ideal critical thinker is habitually inquisitive, well-informed, trustful of reason, open-minded, flexible, fair-minded in evaluation, honest in facing personal biases, prudent in making judgments, willing to reconsider, clear about issues, orderly in complex matters, diligent in seeking relevant information, reasonable in the selection of criteria, focused in inquiry, and persistent in seeking results which are as precise as the subject and the circumstances permit. (p.3) 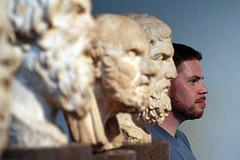 Women’s voices were marginalized in the area of critical thinking until the late 20th century. Carol Gilligan (1993) posited that women may structure their thought processes a bit differently than men do. In her book, In a Different Voice, she claims that men tend to work on a hierarchical ordering of thinking, rather than a relational, connected pathway of thought more commonly attributed to women.

Other notable voices include Nel Noddings and Mary Field Belenky. Noddings (2003) focused on a moral approach to critical thinking as a prerequisite to a foundation of “logical consistency.”

Belenky considered four different ways that women tend to think critically in asserting their authority and capabilities: silent knowing, received knowledge, subjective knowledge, procedural knowledge and constructed knowledge. They have enriched the trait of critical thinking from a perspective that has strong implications for men and women alike.

Contemporary theorists such as Richard Paul and Robert Ennis (1982) emphasized two senses of critical thinking. In the weak sense, the critical thinker adequately sees his or her own and as well as others’ positions. The strong sense enhances the capacity of the weak sense with a deeper understanding and more encompassing worldview.

The Criteria for Critical Thinking as a Persistent Strength

Critical Thinking passes muster as it satisfies all ten criteria for a character strength. Some of the criteria are described below:

Criterion 1: It is fulfilling, because it leads to greater and more complex understanding and the respect for differing points of view.

Criterion 2:It is morally valued, in that it systematically examines differing points of view of self, and the consonant and dissonant attitudes of others.

Criterion 4: Non-felicitous opposites include wishful or magical thinking, mistrust of reason, as well as disinterested, indifferent, and uninterested thinking.

Criterion 6: Critical thinking cannot be decomposed into other strengths. However, the strengths of open-mindedness, curiosity, love of learning, persistence, integrity, and self-regulation are all essential ingredients that make up critical thinking.

John, I suspect much of the thinking around PP is superficial as opposed to critical. For example there is a tendancy to apply all interventions equally. eg Everyone gets a gratitude exercise when research suggests that it may be more effective for females than males. Similarly interventions developed in American apply to all cultures.

Interestingly research suggests that negative emotions promote narrow detailed thinking which is a part of the critical thinking process.

Hi, Wayne-
Interventions are applied and made-to-fit by numerous MAPP-trained coaches who would disagree that everyone gets the same thing. Part of using one’s critical thinking is what our training and immersion in empirical research hone: becoming increasingly “habitually inquisitive, well-informed, [and] trustful of reason.” But we don’t ignore the individual, hence the strengths focus.

Barbara Fredrickson’s Broaden and Build model theorizes that positive emotions promote flexible thinking, an essential part of critical thinking, which is different than what you seem to be suggesting (“negative emotions promote narrow detailed thinking which is a part of the critical thinking process”). Perhaps the word “critical” here could be clarified. It does not mean negative, and is not the same as criticism. Instead, it is the balance of open-mindedness and focused inquiry. Neither of those will operate strictly in the realm of negative emotion, and the flow which results when people who have this strength use it means it is generating positive emotion.

By the way were you aware of the research that suggests that gratitude is more effective for women – I bet most MAPPers aren’t.

John, I thoroughly enjoyed reading your 25th strength! I especially like the work you cited by Gilligan on the difference between men and women.

I have an important academic event coming up this week, and I want to be all these things:

Thanks for focusing me when I need it!
Best,
Senia

p.s. John, I really like your “simplicity on the other side of complexity” by OWH summary.