le·ver·age Pronunciation: ‘le-v&-rij, ‘lE-; ‘lev-rij
1: the action of a lever or the mechanical advantage gained by it
2: an agent through which vital powers are exercised
The American Heritage® Dictionary of the English Language, Fourth Edition (2007) 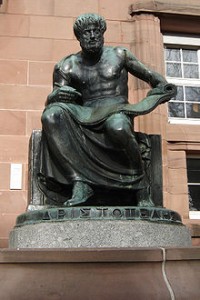 The genesis of knowing, valuing, and acting on one’s character strengths is founded in the timeless and enduring virtues that Aristotle spoke of nearly 2400 years ago. Aristotle was interested in the notion that a major goal in life was to aspire to happiness by living the good life, predicated on the formation of the cardinal virtues of wisdom, courage, moderation and justice. Virtue is for the sake of what kind of person you are; what kind of person you will become.

Aristotle claimed that virtue is developed through action: brave people became brave by doing brave things. He claimed that a major purpose in life was to experience happiness through living a virtuous life. And there are certain ways to achieve it. He observed, in the interrelationship of human beings, the importance of establishing a code of right and wrong – a distinction between virtue and vice. The Greek word for virtue is arete ethike. This literally means habitual excellence. When you know how to do something well, it brings pleasure, and the more things you know how to do well, provides more avenues for enjoyment and the opportunity to flourish.

Developing strengths requires time and experience. Becoming “good” is a learned behavior. However, we must be aware that we are human and imperfect beings, and the best we can do is to strive to attain this measure of moral excellence. A person’s intention to act well is highly influenced by the strengths he or she has acquired. By daily practice and ritual, the person reflects on the importance of making appropriate changes and calls upon one’s strengths to support such action.

Part of the ability to internalize virtue is to find ways to leverage one’s character strengths. I am intrigued by the term “leverage.” Born 35 years after Aristotle’s death, the ancient Greek, Archimedes, left a legacy on the ability to design “machines” through the use of levers.

The metaphorical phrase, “leverage your strengths” has become commonplace in positive psychology. This conjures up images of how the formation of one’s character strengths serves as an “advantage” to support tasks and relationships. It helps us to shape, frame and create new situations. In physics terms, a lever provides a “mechanical advantage” in moving an object – less effort is provided to move something a greater distance.The same can be said about using our strengths to bring out the best in ourselves and others.

Next month, Part 2 will feature practical ways to make strengths come alive by understanding and practicing Strengths Mechanics. Strengths Mechanics metaphorically mimics Archimedes’ principles of leverage and Newton’s Laws of Motion, as they connect with Aristotle’s conception of virtue. In other words, leveraging virtue through Sir Isaac’s principles of inertia, momentum, and action/reaction in human relationships might be an interesting angle of vision that supports the process of human flourishing.

Images
Both images from Wikipedia
Statue of Aristotle (1915) by Cipri Adolf Bermann at the University of Freiburg im Breisgau
Bronze statue of Archimedes at the Archenhold Observatory in Berlin. It was sculpted by Gerhard Thieme and unveiled in 1972.

Grandma Had It Right! Positive Psychology And Common Folk Wisdom

Leveraging strengths has always excited me. I think an older term for leverage might be synergy.