The Stuff that Dreams Are Made Of: Capitalizing On A Day with Dad 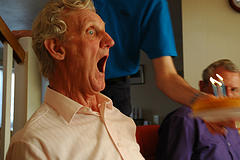 Positive interventions such as capitalizing, savoring and expressing gratitude have the potential to intentionally and explicitly cause a favorable change in subjective well-being. Shelly Gable, a professor at UCLA, has done extensive work in the area of capitalization. Capitalization is about sharing positive events with others which may increase positive emotions and a sense of increased belongingness. The more that positive emotions are shared, the greater likelihood that they will be remembered. One major component of capitalization is active constructive responding (ACR) – a process in which a person provides enthusiastic support when providing feedback to another person. Although I consistently practice capitalization and ACR with my students, I decided to try it out at a recent family affair.

Blowing out the candles

In early August, our family flew out to Boston to attend a family reunion that also coincided with my father’s 80th birthday. Prior to the trip, a variety of past images and thoughts permeated my brain of “not being a good-enough son.” This included several real and some standard self-inflicted adversities that have wasted emotional energy in me since childhood.

With a strong grasp of the positive psychology skills of capitalizing through active constructive responding; savoring; and showing gratitude, I consciously made a decision that the reunion and birthday would be a celebration of my father’s life, for all the good in him; and to make the event about him, not me. The reframe focused on helping capitalize on his words and actions; expressing gratitude for “being a good father” and personally savoring these moments in time during the party/reunion. 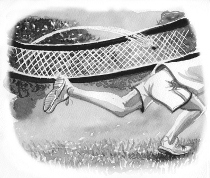 By focusing on my Dad and others, I was able recapture wonderful memories from childhood as I played badminton with my ten year old daughter. At one point, I called her my sister’s name – she looked similar at that age. I was back in time, a real good time and I was savoring – basking in the warmth of sharing my positive childhood experiences with my daughter. And when my father came into the game, I marveled at the athletic skills of a man in his ninth decade – instead of making it a Freudian competition.

This wasn’t about living up to expectations. It was all about the good, and when my father spoke to the entire family about his orchestration of the event – as he and my step-mother planned everything – there was not a dry eye. He exclaimed that the party and reunion was about us, not him. It was about keeping family connected. He did this all for us.

After he spoke, an amazing calmness came over me, and I asked for everyone’s attention as I publicly spoke to my Dad, reminding him of a time when I was 11 years old, and was fidgeting fearfully at the starting line of a 3-mile 4th of July road race. I realized that all the other runners were between 16-40 years of age. I was totally out of my league. I look up at my father and he appreciatively nodded his head up and down, and softly said to me, “It’s okay. It will be fine.” And it was, and still is!

This brief discourse was not designed to share my dirty laundry and luggage of childhood issues as an end in itself. By calling upon the skills of active constructive responding, savoring, and showing gratitude, I transcended the moments into a wonderfully powerful and fulfilling experience. I think I grew a lot that day as I made the lyrics of the Carly Simon song, The Stuff the Dreams are Made Of, come alive:

Take a look around now
Change the direction
Adjust the tuning
Try a new translation
Dont look at your man (in this case, my father) in the same old way
Take a new picture
Just because you don’t see shooting stars
Doesn’t mean it isn’t perfect
Cant you see…

Images
Blowing out the candles courtesy of Drift Words
Playing badminton taken from the illustration by Kevin Gillespie of this article in the book Gratitude: How to Appreciate Life’s Gifts.

The Delight and Discontent of Eating

Thanks for sharing this story, John! You demonstrate well how the combination of a sense of possibilities and some new ways to move forward can change outcomes. Positive psychology at its best!

John,
What you have said is so true. When you change how you react to your environment, the environment changes the way it reacts to you. If you catch people being good, good catches you. Thanks for sharing your experience.

Happy Birthday to your dad John! It’s clear that you helped make your Dad’s experience a positive one. And in so doing, you made everyone else’s experience better too.

Congrats and best to you,

What an absolutely delighful piece John. Thank you for writing it and sharing it with us – my own father died nearly 20 years ago and I was deeply moved by your account.
Best wishes
Angus

Angus: Thanks for your kind words. We can use our “remembered pleasures” in similar ways in celbrating our parents. Also, please send me your email when you have a moment so we can catch up – yeagerj@culver.org.

Dave: I love your comment on the reciprocity of “catching people doing good.” I will use this as a mantra for future events. Thanks. John

Elona: I apologize. My last comment was meant for you.
I love your feedback on the reciprocity of “catching people doing good.” I will use this as a mantra for future events. Thanks. John

Dave: Thanks for your thoughts. Framing the environment is a powerful tool. John

David: Thanks for your kind words. It was a wonderful event that I can call upon at any time.

I just got a chance to read this article, and it brought tears to my eyes just to picture the open expression of love at your father’s event. It seems that it’s so much easier many times to capitalize with non-family members, but what a gift you gave your father — and received from him.

John,
This is the most beautiful piece. Thank you,
Senia

John,
This is a gift to those of us who know our parents won’t be with us forever. It’s a reminder that we have a choice about what we think about. It’s also a reminder that no particular point in time defines an entire relationship and things go on changing all the way along.

I’ve been reading my grandfather’s letters to my grandmother, written while he was an officer in France during WW I. His first son was born while he was away, so there are a lot of dreams and greetings to his baby at home. I happen to know that the reunion did not go well. Like many babies who meet their fathers long after birth, my uncle had trouble accepting his father, and my grandfather experienced great disappointment that his daydreams on the front didn’t materialize the way he wanted.

I also know that my uncle was the one child who was always there for both my grandparents up until the end. He was the one they called on if they needed any help.

So either snapshot would be an incomplete representation of what was a relationship of many colors.

Thanks for your story, and Bravo!
Kathryn