Character Strengths and Excellence in Sport 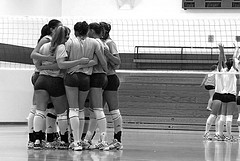 Most people involved in sport agree that proper behavior makes the sport better and that character matters.  While there is a great amount of attention paid today to ideals of sportsmanship, or positive relational character — respecting self, teammates, opponents, and the game — there isn’t a lot of consideration paid to the influence that an athlete’s or coach’s character actually has on performance.  Besides the evolution of “sportsmanship” programs throughout the United States – which are intended to heighten awareness about the realities of sport today – the relationship between character and performance is seldom addressed.  Despite the logical link between character and performance, may coaches dismiss this as an intangible factor that can’t be measured.

Performance and relational character are not mutually exclusive.   Tom Lickona and Matt Davidson, authors of Smart and Good Schools, suggest that performance character focuses on the diligence, perseverance, and self-discipline necessary to a commitment to academic, athletic, and other areas of excellence.   They claim that moral or relational character embodies the traits of “integrity, justice, caring, and respect – needed for successful interpersonal relationships and ethical behavior.”

An athlete who has developed a strong character can call on a foundation of well-formed habits in aspiring to true excellence.  The competition of the sports arena, together with a personal goal to optimize performance, challenges the athlete to continually stretch his or her abilities through deliberate practice, a focused and effortful rehearsal.  Peter Greer, former headmaster of Montclair Kimberley Academy, said that we must will good habits and improved skills; we can’t just wish them to happen.

What separates successful performers from others is the ability to make the most of what they can control in their aspirations for optimal performance.  This doesn’t mean that anyone can become an elite athlete, but it does mean that athletes can strive to perform to the best of their ability levels – aspiring to excellence as individuals and as members of a team.  Malcolm Gladwell supports these assumptions.  The “physical genius” wills performance, rather than wishes it.  Deliberate practice requires concentration and doing what needs to be done.  This provides the athlete with the knowledge of what to do at the right moment on the playing field.  Gladwell writes:

What sets physical geniuses apart from other people, then, is not merely being able to do something but   knowing what to do – their capacity to pick up on subtle patterns that others generally miss.  This is what we mean when we say that great athletes have a “feel” for the game, or that they “see” the court or the field or the ice in a special way.  If you think of physical genius as a pyramid, with, at the bottom, the raw components of coordination, and, above that, the practice that perfects those particular movements, then this faculty of imagination is the top layer. This is what separates physical genius from those who are merely very good.

Marcus Buckingham and the late Don Clifton, authors of Now, Discover Your Strengths, have framed the development of good habits or strengths in what they call the “anatomy of a strength.”  They ask five important questions:

When athletes and coaches can answer these questions, it can be empowering for individual and team performance and enjoyment.

By learning about character strengths and ways to build and apply them, coaches and athletes can be guided to acknowledge, own, and apply their own strengths, to value their authentic selves, and to increase both their collective and self-efficacy.

Regaining Quality of Life When Your Son Totals His Car

How Anticipation Can Save the Day

I think that sports appeal most to those who have competition as a strength. I have connectedness as a top strength and I don’t value competition as as much as seeing the attuned collaboration in a sport. I think that sports are symbolic expressions of the cultures from which they arise, and that they primarily reflect how a given culture values collaboration, play, and competition. “Physical genius” reminds me of Howard Gardner’s notion of kinesthetic intelligence, and I want to learn more about the correlations between strengths and the multiple intelligences. I can see the usefulness of constructing a matrix of sorts between the two. I think that the domain of moral thinking encompasses the boundary between harming community and not harming community, and that the moral good is one good among many that ought to be taken into consideration and pursued in the pursuit of living well in a strong community.

I love this article, John. I really like how you weave in Smart and Good Schools, Gladwell’s article and the Gallup Strengths book. I’m a big fan of intuition, and in David Myers’ book “Intuition: Its Powers and Perils,” David gives many examples of athletes just having “it” – that physical it.

And I agree with you, John, that as athletes and their coaches get to know their own strengths – and their answers to question #5!!! – the world turns, things move – that is momentous.

Thanks for the thoughts that triggered a lot of mine,
Senia

I think, there is a lot common between VIA test results and finding “superpowers” which are based on STRENGHTS of CHARAKTER useful in sport’s activity. The challenges are :