Home All Comfortable in Your Own Skin (Part 1): Authenticity and Well-Being
AllAuthenticityIntegrity

Comfortable in Your Own Skin (Part 1): Authenticity and Well-Being 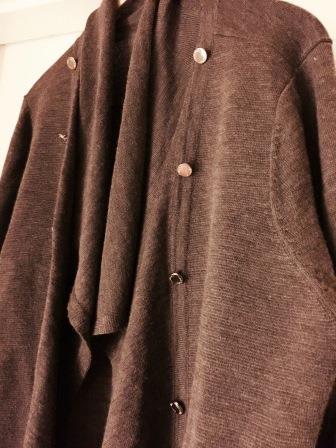 Jan Stanley, MAPP '10, was a director of learning systems and leadership development before leaving the corporate world to create her own map of a road less taken. Jan's focus is now squarely on her passion of applying positive psychology through the use of poetry, mindfulness, collaboration, and ritual, woven together into ceremonies of well-being. Jan served as a facilitator for the U.S. Army Master Resilience Training program. She is a faculty member of the Celebrant Foundation and Institute, where she teaches others about the beauty and benefits of ceremony. Full bio. Jan's articles are here.

When temperatures drop with the coming of autumn, I love wrapping up in my most comfortably warm wool sweaters. A favorite is my fine gauge taupe cardigan with the gold buttons. It looks, smells and feels like genuine wool. If I had a microscope handy, I could see wool down to its smallest visible fibers. What about ourselves? What can we say about ourselves that is true in every fiber of our being?

The character strength that Peterson and Seligman called Integrity[Honesty, Authenticity] belongs to people who are who they say they are, through and through, like my wool sweater. There are three traits listed in this strength, each slightly different from the other.

I find myself most intrigued by the final one, Authenticity. Even though authenticity is a valued strength across time, geography and cultures, empirical research on it, especially as it relates to well-being, has lagged behind research in other strength areas like gratitude, hope and optimism. This is beginning to change, and that is a good thing, because authenticity plays a key role in our well-being.

In the landmark book Character Strengths and Virtues, Peterson & Seligman listed twenty-nine distinct scales for use in measuring various aspects of integrity and honesty, along with a note that “few measures of authenticity exist.” In 2008, Wood and colleagues introduced an authenticity scale along with findings that demonstrate connections between authenticity and well-being. The scale itself includes self-report questions such as, “I think it is better to be yourself than to be popular,” and “I always stand by what I believe in.” After refinement, the researchers narrowed the scale to twelve questions defining authenticity in a way that could be divided into three subscales: authentic living, accepting external influence and self-alienation.

From work by Wood, Linley, Maltby, Baliousis, and Joseph 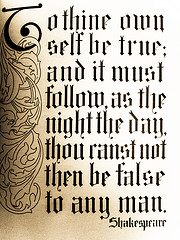 Authentic living correlated positively with happiness, subjective well-being and psychological well-being. When we have the courage to live authentically, we feel better! This is an example of research catching up with wisdom through the ages. As one case in point, see how Polonius’ advice to Laertes in Shakespeare’s Hamlet reflects authentic living.

“This above all: to thine ownself be true,
And it must follow, as the night the day,
Thou canst not then be false to any man.”

Were he writing it today, with the advantage of this new research, Shakespeare might have added a fourth line, something like, “….. And thine well-being will shine as a star bright in the north skies!”

This has been true in my own life. After having made a firm but difficult decision to transition careers many years ago, I accepted a position from a friend in need, who convinced me that my knowledge and skills would contribute to a worthy cause. I accepted by signing a 1-year agreement, even though it was in conflict with the direction I had set for myself. Although I made the decision of my own volition, this external influence amplified my stress levels in a way that created serious health impacts for me, and made me less effective in the role than I might have been, had I been more authentically aligned. 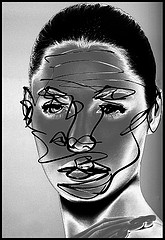 In the study’s most pronounced results, the third subscale, self-alienation, was found to correlate with much higher stress and anxiety levels and lower levels of well-being. It follows that one avenue for reducing stress and anxiety and increasing well-being in our own lives is to reflect on the ways that we alienate ourselves from our beliefs or ideals, from being true to our own selves, as Polonius put it. While not all stress is caused by self-alienation, this study suggests that looking for ways to live more authentically is worth a try.

Let’s think about the cost of self-alienation using an example from Dead Poets Society. Mr. Keating’s (Robin Williams) decision to maintain his authenticity cost him his job at Welton Academy. Who can forget the scene where the boys, led by Todd, who had struggled to find his own authentic voice, stand on their desks calling out, “O Captain! My Captain!” as Mr. Keating leaves the classroom for the last time? The cost of staying true to himself was seemingly very high. In contrast, we can only speculate as to the cost if Mr. Keating had acquiesced, teaching for his remaining decades in a way that was self-alienating – a way that Thoreau might have described as leading a life of “quiet desperation.”

Come back tomorrow for ideas about ways to ramp up the Authenticity character strength.

Photo Credit: via Compfight with Creative Commons
Jan’s taupe sweater courtesy of Jan Stanley
To thine own self courtesy of bcostin
Roots of authenticity courtesy of Effortless Vitality
Self alienation courtesy of wwwuppertal

Positive Psychology Researcher List: Invitation to Use and Contribute

Comfortable in Your Own Skin (Part 2): Three Avenues to Authenticity