Iris Marie Bloom, MAPP. A poet, peace and justice activist, massage therapist and safety/self-defense instructor, Iris is happiest when she is out sailing or just hanging out with loved ones, human and canine. Full bio.

Her past articles are here. 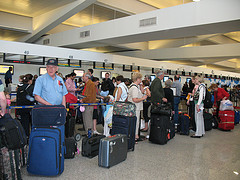 I recently interviewed two random humans on the subject of generosity, in the Atlanta airport when my flight was cancelled five times in a row due to thunderstorms.  I share some details of my interview with the first subject, who was thoughtful, humble, and humorous in her approach to my questions.  My interview with her left me feeling rather elated about just how wonderful random human beings can turn out to be when you get up the nerve to ask them “positive psychology” questions.

First, why study generosity at all?  I’ve been fascinated to follow the research findings of Jorge Moll and Jordan Grafman, two neuroscientists at the National Institutes of Health.  Their 2006 research showed that when volunteers placed the interests of others before their own, the generosity activated a primitive part of the brain that usually lights up in response to food or sex.  As the Washington Post reported the impact of their findings, “Altruism, the experiment suggested, [is] not a superior moral faculty that suppresses basic selfish urges but rather [is] basic to the brain, hard-wired and pleasurable.”

I began wondering how generosity is understood, experienced, and expressed across differences in race, class, and culture in the United States.  Right now my hypotheses are far too sketchy to even suggest here, so you can have fun coming up with some hypotheses of your own by looking at my raw data.  I asked “Denise,” a thirty-something African American woman who good-humoredly agreed to answer a few questions, “What is generosity?”  She thought a few moments and answered, “Doing something outside your comfort level, something that takes effort.  You have to think about it.  For example suppose you had ten thousand dollars to give away: you would have to really think to whom you would give it, for what purpose, and for what effect?”

It occurred to me that what Denise was saying doesn’t contradict the research showing that generosity is pleasurable.  If anything, her answer supports moral philosopher and Harvard neuroscientist Joshua Greene’s work on the different areas of the brain involved in moral decision-making.  It might feel fabulous to scatter ten thousand dollars on the street and watch people’s extreme delight as they picked up the bills.  If moral decision-making were up to the limbic system alone, such an act of generosity would be as good as any.  But Denise is committed to combining the pleasure of generosity with strategic thinking to maximize its benefit: to whom, for what purpose, and for what effect?

Further, Denise is making a fine distinction about different levels of generosity.  Most likely (based on my own observation and people-instincts) she does things for others so frequently and constantly that she doesn’t even think of it:  she feels good about it, but barely notices it; that’s just what you do that’s part of being human every day.  What she was saying was that for acts of kindness to “count” as generosity, to be claimed as generous, they have to also involve some level of sacrifice “outside your comfort level.”  This brings to mind the distinction Paul Rozin made between comfort and joy.  Essentially, what Denise was saying is that generosity is worth sacrificing comfort for.  I would argue that this is because it increases joy.

Encouraged by her thoughtful responses (especially since she began by saying she hadn’t really thought much about it!), I asked her to describe three examples of generosity on her part.  I watched her overcome the reluctance to “brag” about our own private acts of generosity, and learned that she had recently paid for her teenage brother and two cousins to go to Six Flags Over Georgia (a huge, Disney-esque amusement park).  She said “they never stopped talking about it,” and described it as a good bonding experience, especially since she invited her sister as well and they became closer too.  When I asked later what motivated her to do this, she said, “I remember being a teenager; it’s a hard age, and it’s rare you get to fulfill something you want to do.”  She also said it was a good reward for her brother, who had gotten all As all semester in school.  Finally, since her brother lives in another state, it was a chance to spend some quality time together.

“The more researchers learn, the more it appears that the foundation of morality is empathy,” sums up the Post’s Vedantam.  Jordan Grafman, Antonio Damasio, Joshua Greene and others are showing that emotions are central to moral thinking.  Thus, Denise’s strategic thinking about positive rewards for good behavior seems to be layered on top of, or at least alongside, the pure empathy of “I remember being a teenager,” and the prosocial experience of closeness all around which resulted from her good deed.  Interestingly, when we think about the pillars of positive psychology, Denise’s five tickets to Six Flags built pleasure, or positive affect, for herself and others; created meaning, by building closer relationships and encouraging educational attainment; and built a positive institution, as well:  that key institution, the family.

Denise’s other examples including giving joy, as well as implicitly appreciation and gratitude, to her aunt by giving a meaningful gift; and giving comfort, in the form of needed practical assistance, by working double shifts all week for a co-worker who needed to take care of an ill grandfather.  Her answer to my question about what benefits the co-worker received reinforced my impression of her fundamentally empathetic approach:  “He benefited from us showing our understanding through action.  I’m making it easier for him, and he will understand that we care.”

I asked Denise about her role models for generosity.  “My mother and aunt – mom would invest her time and money in supporting our interests.” And when friends came over, “Mom would always bust out with cookies, a full scale dinner at 10 PM.”

After the formal close of the interview, I shyly offered my sketchy hypothesis that possibly working class people experience generosity more directly and more pleasurably than more affluent people, who just sit back and write a check.  She immediately contradicted this:  “Oh no, I don’t think so.  Because I received a scholarship, and when I got to meet the lady who had written that five thousand dollar check, she was so interested, she was so curious about me, you could just tell she felt great.”

So, there you go.  As it turns out, writing checks, working on others’ behalf, and giving gifts that your loved ones “never stop talking about” are all right up there with food and sex.  So, assuming you are fed well enough (we’ll talk about your sex life another time), go for it.  Get out there and get generous.  Those Buddhists really have it going on:  “relieve the suffering of one person in the morning, and give joy to one person in the afternoon.”  Activate your empathy, show understanding through action… and glow.

Greene, J. (2013). Moral Tribes: Emotion, Reason, and the Gap Between Us and Them. Penguin Press.

“When traveling with children, if emergency oxygen masks deploy, put your mask on first.“ – FAA

Great insight, Iris! Having spent a significant part of my positive psychology education flying cross-country every month, I too found that it was the randomly selected people who sat next to me on planes that taught me the most about applying my lessons! I never miss the opportunity now to start a conversation with a stranger on a plane, because I know that it is a guaranteed successful lesson about positive relationship. I took your advise to ” relieve the suffering of one person in the morning and give joy to one person in the afternoon” as soon as I read this posting. One hour after reading this, while leaving the ATM outside of a grocery store in Los Angeles this morning, an worn-looking elderly man approached me and asked if I could give him some money, so he could buy myself some groceries for dinner. Having just read your posting, I asked him when was the last time he had a dinner. He said that it had been days, because it was the end of the month and social security checks don’t come out until tomorrow (Monday, July 2). That qualified as suffering in my book – I handed him $20.00. He handed it back, saying that it was too much! I couldn’t believe it. Remembering the second half of your advise, I handed it back to him and said, “Pay it forward – make someone else’s life better today.” He cried, we hugged and needless to say, I walked away higher than the fireworks I had seen at the Santa Monica pier last night. So, my friend, know that your interview in Atlanta, written up in Philadelphia, made a difference in at these three lifes in Los Angeles today!

OK, this isn’t “on point” as we lawyers say, but I found that during MAPP, and since, I started striking up conversations with those sitting beside me in airplanes! Weird, huh? As Chris Peterson says, “Other people matter.” I’ve had some absolutely fascinating conversations that have made me feel great about people.