The Cult of Thinking 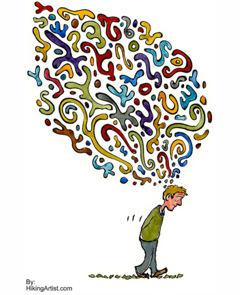 We are constantly in an internal dialogue with ourselves. We comment, we evaluate, and we judge. Although such inner conversations may seem benign at first sight, what we say to ourselves about ourselves can in fact have an important influence on our emotional well-being as well as our beliefs about our capabilities.

Think of your own pattern of thinking for a second. How much do you focus on the judgments of others as well as your own judgments of yourself? How much time do you spend dwelling on self-critical, negative thoughts?

Negative self-talk, of course, does not need to be flawed just by virtue of being negative. But if you have a tendency to focus on the negative all the time, the chances are you are self-sabotaging yourself. For example, you may consider yourself not good at basketball. This may make some sense if you have repeatedly performed poorly in the past. However if you think that you will not be good at any sort of sports at any time, then you are in the territory of overgeneralized negative thinking, which lacks accuracy.

Evaluating the Outside World: Bad is Stronger than Good

It could be equally troublesome to delude ourselves over optimistically about our own qualities. But this seems to be less common because the tendency to focus on the negative is built into our neural circuitry. A growing body of research from Baumeister and others suggests that negative information tends to influence our evaluations more strongly than positive information of equal magnitude.

Not only does negative information get processed more thoroughly than positive, but also bad impressions in general are less readily disconfirmed. From an evolutionary perspective this innate disposition makes a lot of sense. The tendency to focus on the negative has adaptive value when facing hostile environments including the risk of attack by predators. 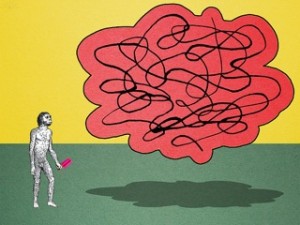 A Cloud of Thoughts

Apart from being inaccurate and emotionally exhausting, overgeneralized negative thinking can also prevent us from reaching our full potential. Such biases in thinking often negatively skew our perceptions of ourselves. Negatively loaded labels harm our self-conception. How can we bring the best in ourselves if we constantly doubt our capabilities?

Inspired by Acceptance and Commitment Therapy, Todd Kashdan provides an effective way to counter negative thinking by monitoring it instead of repressing it. In one exercise, he encourages people to think of an ugly, self-critical thought and go through the following steps: 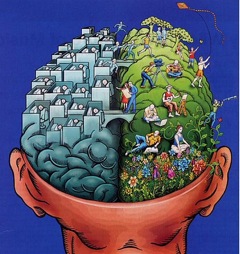 Afterwards, he points out that among these three versions, the most accurate one is the final one. This exercise aims to change people’s relationships to their negative thoughts by creating a distance between the thinker and the thought. The realization is simple yet powerful: when we use the language of observation, we better realize that our thoughts are just thoughts.

What Happens to your Emotions?

Building on this exercise, we could also try to observe the emotions associated with such negative self-talk. What are the feelings that negative self-labeling evokes? Notice also the sensations in the body. How does experiencing negative emotions feel in the body? Stepping back, this kind of mindful awareness gives us more choice and flexibility in how we deal with negative thoughts and emotions.

If you think you do not have enough time to stop what you are doing and capture your self-talk, you should think twice. Busy should not be a badge of honor. We could all be better off if we spent time tuning into our inner selves and trying to understand where such negative thoughts are coming from in our mind. Do they come from past experiences of failure, from insecurity, from things we’ve heard others say about us? Only then can we build the inner resources that will enable us to counter such self-critical thoughts. When self-doubt doesn’t get in the way, we can pursue unexplored life directions much more freely.

Photo Credits: All via Compfight with Creative Commons license

Self talk courtesy of HikingArtist.com

Irem – {edited} I can’t seem to find any long term studies demonstrating the effectiveness of ACT. Do you know any?
{edited: Has} the technique Todd talks about {edited: been shown in research to work over a control condition?}
{edited}

Nice article Irem and it’s great that you drew from Todd’s TED talk which is as profound as it is entertaining. it occurs to me that what separates humans from other animals is not our emotions, but our penchant for making up stories about what those emotions mean.

Jeremy – perhaps we just tell stories to convince ourselves that we aren’t animals?

Irem, could I post your article as a “Guest blog” on my web site in the blog area? I would love to do that!

Julie,
All articles on PPND starting October 2008 are available for syndication in other online publications, as long as they have a link back to the original publication. Here’s a link to the reprint policy that has further instructions.

Irem, this is an educative article worthy reading over and over again. It is true we are constantly in dialogue with ourselves at sometimes if not controlled lead to fatal end. I appreciate your approach and presentation. Thank you and be blessed.

The technique Todd talks about is a very basic mindfulness exercise that has happened to be used in ACT as well. Mindfulness is often associated with meditation. However, as this exercise shows the skills involved in mindfulness can be used in a variety of settings (not just in meditation). It is a simple mental training that has scientifically shown to be very effective.

Dear Julie,
Thank you for wanting to share the article. It is absolutely fine with me. The more people read the article, the more chance we (hopefully) have to help others.

Thank you Jeremy and Kanot for your nice comments.

Irem – {Edited: in what ways has the training been shown to be effective?} And {edited: for whom} is it effective?

There is a plenty of evidence in the psychology literature showing the positive impact of mindfulness. A simple search in Google scholar will provide you with many useful research articles on the topic.

I am referring to mindfulness as an attribute of consciousness (not as meditation per se). This exercise is a simple mindfulness technique that has also happened to be used in ACT. It aims to help people better monitor their thoughts by way of increasing their awareness.

Irem – what is the name of the technique so I can search the databases?

You might find the following helpful:
Kashdan, T.B. & Ciarrochi, J. (2013). Mindfulness, acceptance, and positive psychology: The seven foundations for well-being. New Harbinger Publications: Oakland, CA.
It will be out in April.

Irem – I appreciate your efforts and I won’t {edited: post here} anymore.

However check out this link: