Home All The Lighter Side of Life
AllHome and FamilyHumorMoralityRelationships 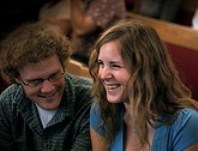 “If you can’t laugh at yourself, you’ve missed the biggest joke of all.” 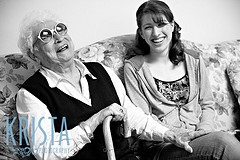 My paternal grandmother was known for her infectious sense of humor. It is rumored that when she was young, her peels of laughter rang in the streets of her little neighborhood. She lived with us when I was growing up, and I remember her as my constant partner in mirth. She connected to my childlike sense of humor as naturally as she did to grown-up wit. When my husband-to-be proposed to me years later, she was a strong advocate for the match, her conviction based on the fact that he laughed a lot, hence would keep me happy.

What Good Comes from Humor?

Though illiterate, Dadima had a sharp insight into the workings of the mind. Decades later, I now study through science what she believed through intuition. From calming the cardiovascular system and improving depressive symptoms, to enhancing relationships and providing a greater purpose in life, humor has been shown to be an primary contributor to a well-lived life.

Research shows humor to be an indispensable trait for effective leadership, not only as a de-stressor in challenging times but as a promoter of workplace morale. Even being a parent is less bumpy when humor joins the ride. Mothers with cheery dispositions are able to move through the flow of family chaos in a stable manner, thus contributing to the development of a secure attachment in their children. Marriages are shown to be stronger when partners can appreciate the lighter side of life. 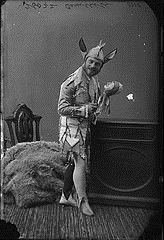 Other studies have demonstrated the effects of humor on recovery from bereavement. Humor may help individuals find perspective on their loss thus leading to less depression and a greater purpose in life. Certain therapy models, such as laughter yoga, encourage laughter to calm the stress response and perhaps even lead to a mystical experience of transcendence.

The centrality of humor in our lives is reflected in the ritualized roles within societies of jesters and comedians. Across time and cultures, making people laugh has played an important part in society, from the YuSze of imperial China to the court jesters of medieval Europe, from the stupidus of ancient Rome to the stand-ups in Improv Comedy Clubs.

Yet, while intended to make people laugh, humor can also bring tears of irritation or outbursts of anger. I am a regular witness to my daughter’s desperate cries for help over her teenage brother’s idea of jokes. We all watched the unfortunate events at Charlie Hebdo a few weeks ago. What is it about humor that can give rise to the most extreme form of moral emotions, from empathy and compassion and to fury and contempt?

Once Upon a Time

The answer may lie in the evolution of humor itself. Although even non-human primates engaged in social play, it was with the development of language that humans began to enjoy laughing and telling jokes. Humor is likely the result of a profound transition in the evolution of the brain, the emergence of consciousness. 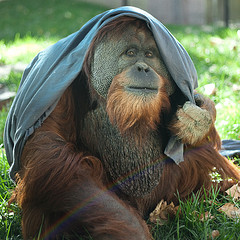 Primate play.. not too unlike
teenage boy play

Consciousness allowed us to create a coherent narrative of our history, with a lived past and an anticipated future. With the ability to look into the future came too the realization of impending dangers and our eventual demise. This not only infused life with fear, it also created the desire to beat biological existence and find meaning by belonging to something more eternal than the finite self. Meaning provided the stability that the emotional upheaval of life did not, and humor allowed us to move past the chaos of constant change by focusing on the larger perspective and seeing the absurdity of most of our insignificant worries.

With consciousness too emerged the self that existed within the framework of other people. Morality and culture evolved to allow for peaceful existence within the social structures that were key to our survival. Humor built relationships within tribes and strengthened in-group bonds, often at the expense of inter-group relationships.

Today, however, our tribe is slightly larger than the couple of hundred people in our ancestors’ times. We live a global existence and our sense of humor has to take the sensitivities and cultures of 7 billion people into account if we are indeed to thrive as a humanity. This is not always easy, and yet it is essential.

So what are we to do? Chris Peterson’s short and sweet motto may be just the reminder we need. ‘Other People Matter’ guides us back to the essence of humor. Laughing at another’s expense disconnects us from our human values and lowers us on what Jonathan Haidt calls the dimension of divinity. 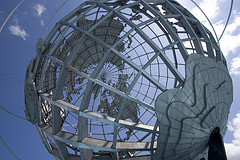 In our inter-connected world, we need to build other-focused strengths that take all cultures and traditions into account. Joshua Greene stresses the importance of connecting to one’s own individual experience with another’s pain and of exposing ourselves to cultural experiences so as to build empathy. Jonathan Haidt calls for greater perspective, humility and a general acceptance and appreciation of all moral matrices.

Perhaps the focus on the other will also help my son develop his budding career. I may remind my young comedian that a joke ceases to be a joke when it affects the sensitivities of the person who witnesses it, and that the success of any stand-up depends on his ability to refine an effective act that is appropriate for different audiences in different settings, depending on tastes, traits and temperament. Strutting around with boxers over his head or socks hanging off his ears may not be the most appropriate form of humor when his twin sister is trying to solve a complicated math equation. Until he manages to build social intelligence and a more coherent act, I may warn him to simply stop when he finds that the other person is not with him. Trying to clarify the humor is the worst form of fun and leads to the most desperate cries for help. E. B. White, the great New Yorker humorist, once observed that explaining humor is a bit like dissecting a frog: “It can be done, but the subject tends to die in the process.”

I may also help my daughter build her own sense of humor by encouraging her to nurture her imagination. I may remind her of her contagious peels of laughter at her brother’s attempts at comedy not too long ago, and how they enhanced both their happiness and their relationship. Nurturing the kid in her and enabling her to appreciate the absurd and the unexpected will undoubtedly fuel her imagination and contribute to her growth.

A good life is the synchronized dance of hedonic and eudaimonic happiness, for at the end of the day, all we want is to be happy and live meaningful lives. Although life may simply be a meaningless ride that we try and cloak with a fulfilling purpose, humor allows us to laugh at the insignificance of most things in the vast flow of human experience and yet connect to what we find truly important.

Dadima’s memories are filled with the smiles she spread. Her instincts about my husband were right for he fills our days with much laughter and joy. In life and after death, we will be known for the way we made others feel. Happy beats unhappy any day.

Reference List
Baumeister, R. (n.d.). The meanings of life: Happiness is not the same as a sense of meaning. How do we go about finding a meaningful life, not just a happy one?

Damasio, A. (1999). The Feeling of What Happens: Body and Emotion in the Making of Consciousness. New York: Harcourt Brace.

Greene, J. (2013). Moral Tribes: Emotion, Reason, and the Gap Between Us and Them. Penguin Press.

Arianna Huffington: My Choice for the 2014 Positive Psychology Ambassador