Gloria Park, MAPP '06, is a doctoral student in Exercise and Sport Psychology at Temple University. Currently, she works as a Program Coordinator at the Children's Hospital of Philadelphia, and is an Assistant Instructor for the Master of Applied Positive Psychology Program at the University of Pennsylvania. Full bio. 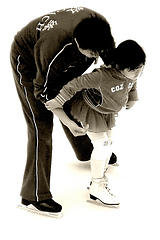 Learning to skate
Very vividly, I remember the first time I tried to do swizzles. A swizzle is one of the most basic skating moves, where both feet simultaneously trace outlines of coke bottles on the ice. I was 5 years old, and was not a natural born swizzler. I recall the feeling of utter discouragement, and telling my mom that I would never become a skater because I would fail my Snowplow Sam test. Being the supermom she is, she encouraged me to try harder and reminded me that I could do anything I put my mind to. It took me about 3-4 weeks and nights of lamenting, but was overjoyed when I finally succeeded. Had I quit that first day, attributing my failure to lack of ability that would have been the end of my skating story changing the course of my life dramatically.

In athletics, and in just about every other realm of life, talent alone is usually not enough to produce optimal performance and bring bounties of success. This is no secret. Hard work, dedication, and discipline usually hold more weight in the development of skills and ability, although having the talent to start never hurts. K. Anders Ericsson and Neil Charness introduced the concept of the structure and acquisition of expert performance, which helped counter previous notions that expert performance reflects on innate, god-given abilities and capacities. Through their research, they found that deliberate practice is one strategy to attaining peak performance. Deliberate practice involves skill-focused goal-setting, intense involvement in structured training sessions, self-monitoring of process outcomes, and receiving feedback. This is great news, since we don’t all naturally possess the ability to excel in everything we do.

Now that I have transitioned from competitor to coach, one of my main roles is to provide feedback to the students on their progress – an integral part of deliberate practice – so I’ve started to think about how applying principles of positive psychology could potentially impact the nature of feedback I provide for them. I can cheer them on blithely with unconditional support and acclamation, but then I would be doing them a disservice. Coaching is supposed to promote growth, improvement, and skill-building, so how do I encourage my students while simultaneously supporting their growth? Researcher Carol Dweck has found that praise is a powerful, effective, motivating force in realms of academic achievement. But all praise is not created equal. Praise that is focused on effort rather than ability, is sincere rather than disingenuous, and is specific rather than general, appears to contribute to enhanced performance. With this in mind, I’ve tried to use phrases like, “Your back leg on the spiral looks much higher – you must have been practicing at home!” Effort-focused praise can promote a sense of control and accountability in the final outcome, which makes sense given that expert performance is more likely the product of sustained effort rather than talent alone, although most likely it is some combination of both.

Dweck’s research further showed that ability-focused praise could potentially be the cause of underperformance. Students praised for being smart often chose easier tasks to try when given a choice to avoid making mistakes and looking stupid. During Monday evening’s session, when prompted to practice camel spins, one of the girls pulled me aside and said in a shy and quiet voice, “I hate spins. I’m not good at them. Can we practice jumps instead?” I could relate. My coaches always praised me for being a great jumper. I wasn’t a fantastic spinner, but I wasn’t terrible either. So when given the chance to choose between practicing jumps or spins, I always chose jumping. When I practiced jumps, validation and praise were plentiful, and I always felt good about myself. The converse was true when I would practice spins, so I would avoid them altogether to my detriment. I encouraged my student to put more effort into practicing those skills that did not come naturally easy to her, and by doing this, I hope to promote agency thinking by increasing self-efficacy, and an I-can-get-better-at-anything-if-I-try attitude.

There are some people in this world who are exceptionally gifted at what they do, like Beethoven and Einstein, but they didn’t go from womb to world entirely self-actualized. It’s easy to forget that it probably took much time and persistence for them to reach their zenith. We are not all natural born classical composers, physics geniuses, or swizzling machines, but with effortful practice and the right kind of praise, we can all grow and aspire to be or do anything our hearts desire.

The Power of Stories

What a wonderful article, Gloria. Such an interesting story. You kept me absolutely pulled in, and wondering what I would tell think to tell a young skater as her coach. Thank you for the story, and Kathryn yesterday wrote about how valuable stories can be! Merci, S.

Hi Gloria. A great article. I honestly think you’ve put a lot of effort into writing it, particularly in relation to using real examples to bring it alive! 😆

Thanks Senia and Martin for the kind feedback! 🙂