Home All Arianna Huffington: My Choice for the 2014 Positive Psychology Ambassador
AllBook ReviewBusinessChange

Arianna Huffington: My Choice for the 2014 Positive Psychology Ambassador 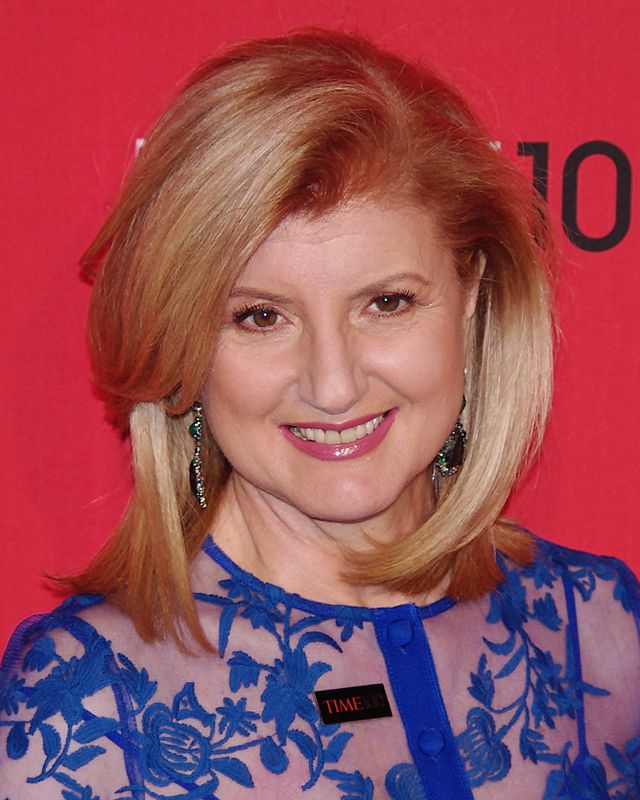 Giselle Nicholson Timmerman, MAPP '06, has over nine years of experience working as a strategy consultant and leadership coach in the Americas, Europe, and Middle East. Giselle has pioneered the application of positive psychology to strategy, leadership, and organizations. She has seen the field develop firsthand and is fortunate to collaborate with the very best practitioners in the world via her collaborative consultant network, Positive Work. Giselle serves as President-elect of the Work Division for the International Positive Psychology Association. Full bio. Giselle's articles are here.

Image from the
Hubble Telescope

When it comes to understanding science we generally lump folks into two camps: the experts and the non-experts. Luckily the experts help us non-experts out. Increasingly, experts are becoming more skilled at explaining their methods and findings via popular communication methods. Bill Nye the Science Guy, anyone?

As a positive psychology practitioner, I appreciate the efforts of master communicators who bridge the two camps. Often these folks are pacesetters who are able to garner early attention to new science and simplify messaging in ways that appeal to larger non-expert audiences. I credit Arianna Huffington as one such leader who has helped push positive psychology principles into mainstream conversation and popularize many research findings.

Over the past year Huffington has proven herself as a rock star advocate of our science and I believe is deserving of her unofficial (until now?) status as a positive psychology ambassador. As an observer, I quite simply believe Arianna Huffington walks her talk.

Published in 2014, Thrive is Huffington’s reflection of what it is that makes life worthwhile. New to Huffington’s writing, I expected her book to be largely composed of personal perspective and anecdotes. I was pleasantly surprised to find myself bookmarking relevant research and new allegories on happiness and meaning. While the term positive psychology is surprisingly not referenced once, the book is peppered with explanations of contributions from the field. Huffington’s messages are strengthened by these citations, and non-experts are better off for them.

Huffington defines three kinds of success in her book: money, power, and the third metric. (I have some qualms with this last term, but I’ll touch on that later.) To define the third metric, Huffington calls on Aristotelean “goods of first intent,” namely well-being, wisdom, wonder, and giving.

On well-being, Huffington’s education in Greek philosophy shines as she gently immerses the reader in a mini-education of how great thinkers helped form the theoretical basis for positive psychology. She goes on to make the business case for supporting greater employee well-being. Her 2010 TEDWomen talk on literally sleeping your way to the top is early evidence of her promotion of well-being in the workplace. This section references a variety of proponents, from William James to Barbara Fredrickson to World Happiness Reports.

On wisdom, Huffington argues we’re a society “bloated with information and starved for wisdom,” and that due to the pressurized pace we live our lives, feelings of “hurry sickness” and “time famine” rob us. Huffington shares habits and exercises to calm and center ourselves, including the researched benefits of gratitude journaling, the role of intuition in decision-making, and the importance of tuning into our values, priorities, and loved ones. Not surprisingly, these are aligned with many familiar positive psychology interventions. She cites Robert Emmons, Michael McCullough, Martin Seligman, Todd Kashdan, and George Vaillant. 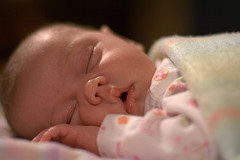 Have we forgotten about
restful sleep?

I’ll note here that there were a few areas in which references to research are very intriguing, yet Huffington’s explanation was too shallow to be fully convincing, such as the explanation of Todd Kashdan’s studies on death in the wisdom section. Admittedly, as a graduate student of positive psychology, I may be one of the few who would’ve appreciated more depth, even if just in the notes.

On giving, Huffington writes on loving, caring, empathy, and compassion as a call to serving our greater humanity. She notably explains that compassion and altruism are learnable skills, and focuses on meditation, parenting, and leadership as teaching channels. Recent research by Schumann, Zaki, and Dweck on a malleable theory of empathy in light of the United States’ empathy deficit supports the stories Huffington shares to underscore the need for more global compassion. The chapter reviews studies on the effects of giving on positive health and community by Suzanne Richards, Barbara Fredrickson, Adam Grant, and more.

Overall, as a consultant and leadership coach who brings this science to the realm of work, I believe my colleagues would unequivocally agree that well-being, wisdom, wonder, and giving are fundamental components of what it means to thrive.

I was engaged and found the content relevant and useful, however, the psychology / sociology scholar in me did not love the overarching framework of the three-legged stool that supports Huffington’s definition of success. The use of “third metric” as a catchall for what money and power lack is difficult for me to accept. It seems vague and adds to an inadequate definition of success rather than truly redefining it. In the end, this is less of a criticism and more of a remark, as Huffington has no claims to be a theorist and has done a remarkable job of sharing great research and ideas with varied audiences. I only hope these audiences ask themselves what is opinion versus what is evidence-based, and take what Huffington has provided to craft their own definitions of success.

Huffington has changed how work is done in the media. In a 2014 Google Hangout on entrepreneurship, Huffington notes a shift in what she believes readers are looking for on Huffington Post:

“We are finding that people want to engage with news that has to do with generosity, ingenuity, innovation. We feel that we have a responsibility to put the spotlight on good things happening. … Some of our most socially engaging content is content that either is about people leading lives that are more fulfilling and less stressful, or that connects them to people that are making a difference in the lives of others.” 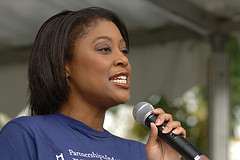 What stories get told on the news?

Not only is Huffington asserting a marked shift in reader interests, she is helping to expand this shift in attention by emboldening the spotlight.

Rethinking business models. In the Giving section of Thrive, Huffington highlights the role of social entrepreneurs and social purpose businesses as role models for adding both financial and social value to the world. She notes three HuffPost-driven projects that have raised significant funding from readers. This is where I’d love to see Huffington explore how traditional businesses, such those in her media group, are rethinking their existing business model for greater social good, rather than creating new, add-on corporate social responsibility efforts. There is some indication of a move in this direction as evidenced by Huffington’s recent addition as a leader of The B Team, which is committed to doing better business for the well-being of people and the planet.

Building positive relationships and shared messages. Crediting energy for sustaining her motivation and performance, Huffington explains, “Building and nurturing strong interpersonal relationships is a key to fostering and maintaining positive energy.” Huffington is constantly acting to build relationships that elevate a shared message, such as the recent luncheon at her home in honor of the people who produced Cake as “an amazing movie putting flesh and blood on mental health and addiction.”

Relying on self-leadership and personal focus. Fans love her poise and directness, which some critics bemoan as over-confidence and ruthlessness. Such is the life of a pacesetter unapologetically redefining what success can look like for herself, and setting a different example for others. What makes Huffington so interesting is her ability to engage others in what she’s espousing simply because the conversation is worth having. Whether or not people buy into it is not the point.

Huffington suggests instead of thinking: “When I get promoted, then I’ll change my habits,” consider: “I wonder which of my well-being habits I can tweak to impact my personal happiness and work satisfaction?” 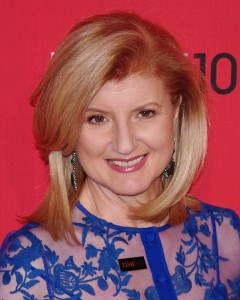 Critics of Huffington’s advice may remark that it is only because she has reached a pinnacle of success, wealth, and power that she has the luxury to promote the virtues of positivity, long sleep, and working towards a passion. There’s no doubting that Huffington’s journey has afforded her this kind of perspective, but this criticism fundamentally has it backwards.

Positive psychology espouses soaking up the journey rather than focusing on the end-goal. Happiness is found in the pursuit, not the destination. Our pervasive “when -> then” thinking patterns are limiting beliefs to a flourishing life. Huffington is getting people to think differently and to question their assumptions of how to live well.

Huffington is advancing the conversation on what it means to be successful by focusing on the ‘third metric.’ I thank her for these efforts and encourage her to redefine this metric in conversation with more positive psychology researchers and practitioners, Perhaps we’ll see you at the IPPA conference in June, Arianna?

Huffington, A. (2014). Thrive: The Third Metric to Redefining Success and Creating a Life of Well-Being, Wisdom, and Wonder. Harmony Press

Arianna Huffington 2012 Shankbone by David Shankbone – Own work. Licensed under CC BY 3.0 via Wikimedia Commons –

Giselle Nicholson is a social behaviorist obsessed with leadership development, team-building, and social innovation. She poses hard questions that invite candor and ah-ha moments critical to effective, lasting change. What makes her jump out of bed in the morning is the opportunity to partner with leaders, teams, and organizations to ignite and develop high impact solutions to pressing problems.

Elaine, Thanks for taking a read!
I love to explore and highlight the ways that many pos psych-related ideas go mainstream, particularly in the workplace.
And if there were an actual reward, I earnestly do believe that she would be very deserving.

Thanks, Giselle. for broadening the spectrum of positive psychology as a science with applications that enrich lives. Good for Huffington for her upbeat take on thriving. Great she mentions research-based interventions. I enjoyed your commenting on the tad too broad category 3, “the third metric”. Loved the creative tone of it despite, as you said, the rather global terminology. She is opening the doors to the masses as are Todd Kashdan, Seligman, Grant, and so many others. Well done.

Thanks Giselle! Its what the field needs – research translated into practical applications for everyday lives. Your summary is excellent!