Increasing Happiness: Invitation to Participate in a Research Study 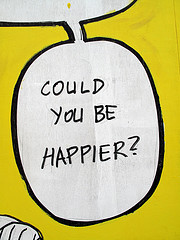 Gabriella Mee has been studying psychology for three years at Nottingham Trent University. She has chosen to base her final piece of work on positive psychology, and she hopes to be able to continue her research in this area after she graduates. She believes that determination is the key to success.

I am conducting a study based on positive psychology. Martin Seligman developed his positive psychology research around the idea that happiness is more than just the absence of suffering and that people can intentionally change their own levels of happiness. He began his interest in positive psychology when his young daughter made a comment that encouraged him to see things differently; she had declared that she had not whined once since she had vowed to give up whining on her fifth birthday. If she was capable of giving up whining, she reasoned, her father should be able to “stop being such a grouch.”

I am basing my research on this idea and building upon his previous investigations. I have chosen three positive psychology interventions and a placebo intervention which have not yet been used together in the same research. This gives me the opportunity to build on previous knowledge. A placebo intervention has been used because Seligman identified the importance of using a placebo controlled method for evaluating impact.

The aim of the research is to explore whether it is possible to increase participants’ levels of happiness over a two-week period using these positive psychology interventions. If you would be interested in taking part, I invite you to participate.

The link will take you to the initial questionnaire, the Steen Happiness Index used by Seligman in his studies. This will measure your initial levels of happiness.

Once you have completed the initial questionnaire, I will send you via email details of one of the positive psychology intervention tasks which you should complete once a day. These are aimed to increase your levels of happiness by focusing on the positive things in life. After a week you will be prompted via email to complete the questionnaire again to identify whether your happiness levels have increased. After the two week period you will be prompted again to complete the questionnaire for a final time. This part of the research is essential as it identifies whether a change following the positive psychology intervention has occurred.

All ethical considerations have been taken into consideration with this study, which meets the guidelines for the Nottingham Trent University Psychology committee. Participants have the right to withdraw from the investigation at any time. They will be assigned unique IDs, and all data will be confidential and destroyed after the research has been completed.

#CharacterDay on March 20: Film Premiere of The Science of Character

Think of It as an Experiment

Hi Everyone,
Unfortunately my study is now closed to new participants due to the huge amount of participants I have received.

Thank you for your interest.
If you would still like to receive further information on the positive psychology interventions used feel free to email me personally and I will send over a positive intervention task for you to try.