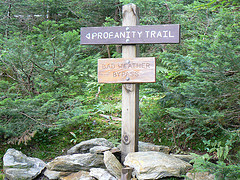 Emily vanSonnenberg, MAPP '10, designed and teaches the UCLAx course, Happiness: Theory, Research, and Application in Positive Psychology. She operates a private practice helping people cultivate meaningful and fulfilling lives, and consults for organizations on how to create desired outcomes and increase well-being. Through her articles and speaking engagements, Emily translates psychological research into practical guidance and goal-directed strategies for the general public. Full Bio. Emily's articles are here. 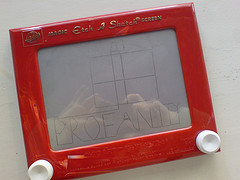 How many of you were raised by parents who supported the social convention that you should not use profanities? My East Coast, Emily Post-abiding parents certainly laid down the law that ladies and gentlemen do not use bad words.

As an adult, I tend to espouse the etiquette approved by my parents, but I still do swear when the Oxford English Dictionary does not offer an acceptable word to endow me with the passionate emphasis I so demand. (I swear this is not a rationalization!) Now research has discovered that there are benefits to swearing in terms of decreasing experiences of perceived and anticipated pain.

Richard Stephens and colleagues at the University of Keele in the United Kingdom examined the question, “Why–in response to physical pain–do people swear?” The researchers defined swearing as, “the use of offensive or obscene language.” To answer their question, they compared the responses to both threatened physical pain and actual pain between people who recited swear words and people who stated neutral words.

The following findings are fascinating with provocative implications for both parents and Emily Post fanatics (I being one). We may need to redefine our responses to expletives in specific situations, since swearing can benefit our well-being.

There is one caveat to these findings specifically concerning those who catastrophize pain, viewing and talking about situations as being worse than they actually are. This is generally a maladaptive response in which unhelpful thoughts are brought to bear when pain is experienced. Interestingly, females who catastrophized did, in fact, experience less pain when swearing. On the other hand, males who tended to catastrophize experienced a diminished degree of the pain reduction from swearing. While males generally tend to catastrophize less than females, the reason for the gender difference in this situation is still unknown.

Evolutionary psychologists have found that fear and anxiety have different impacts on pain experience. Fear is an inborn, immediate alarm reaction to a current threat, which leads to fight-or-flight responses, including increases in heart rate, similar to those experienced by the females in the study. Anxiety, on the other hand, is a future-oriented emotion and is related to a mind-body tension.

Neurobiologically, fear causes the amygdala, the part of the brain responsible for the fight-or-flight reaction, to decrease how much pain is perceived by the brain’s pain receptors. It appears that swearing may be a way to stimulate the same response in the amygdala.

What Do We Do With This Information?

So how do we apply this knowledge to our own lives? For example, when you bump your funny bone, swearing may help reduce the pain you feel. Similarly, if while at work, a co-worker upsets you by threatening some aspect of your well-being, instead of allowing the threat to fester, head to your car for a two-minute “time in” and cuss your way to positivity. You will, empirically and subjectively speaking, feel much better after having done so. Then you can move forward with your day because you intentionally attended to the threat and your subsequent fear. Yes, swearing can be mindful!

All in all, the traditional social norm that proclaims swearing is all bad does not conform to what we learn from science. Swearing can be beneficial in a physically painful situation and in a truly threatening circumstance. My suggestion: pick your favorite profanity and mindfully choose to proclaim it loudly when in pain. You may end up feeling a lot less pain. But be sure to do it when people aren’t nearby. Otherwise, Emily Post would have her field day with you, if she could!

Write Something Every Day

HA! Now I know why I swear more since having kids than I ever did before… So I can endure more moderate-to-strong pain stimulus!! 🙂

P.S. Smiles at your honest comment about kids, Lisa!

Emily,
It is interesting that the swearing that works it not directed at other people (verbiage during road rage comes to mind) but is a reaction to a pain (in the neck or otherwise). I am curious about the swearing as a response to a threat. I wonder if the positive mechanism of swearing may be the result of an interruption in the focus on pain in favor of the more novel approach, swearing. The amygdala makes it possible not to feel the pain so that you can flee; the anxiety, if interrupted, may prevent the amygdala from processing the pain. So my hunch is that the swearing is not the mechanism, though it worked in this case, and incidentally, made for a charming article!! Thanks for that 🙂

Lisa, I piggypack Judy’s comment about appreciating your honesty regarding the not-all-rosy side to parenting.

Judy, I agree, this study’s findings are so fun!

Sherri, the point you bring up is insightful. Although the research hasn’t yet discovered why, specifically, the amygdala functions in an adaptive way in real-life threatening situations as compared to maladaptive ways in anxiety-producing situations, I tend to agree that your hunch is a most viable rationale. Thank you for this thought-provoking comment.

One thing you left out: swearing in moderation can be amusing, especially creative swearing. Was it Shakespeare who wrote “The devil damn thee black, thou cream faced loon.” if someone said that to me I wouldn’t know whether to be annoyed or laugh. Better far to do the latter.

This article misses a main research point in positive psychology. There is a different process if a factor is positive or negative. Think for a minute. Narcotics reduce pain. So does laughter. But with continued use we need more and more narcotics to get the same job done. If you practice laughter, you need less and less to get the same job done. Swearing is like narcotics. People get addicted to swearing. Using swearing to reduce pain works, but it is no different than any of the more traditional areas of psychology. It will get you back to normal, but cannot get you closer to s subjective sense of well being.