Oxytocin: Go Out and Touch Someone 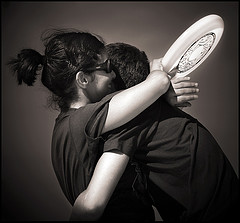 Oxytocin is a neurotransmitter that acts as a hormone. Often considered a major player in the regulation of trust and morality, its study is revealing fascinating information about human behavior and relationships. Oxytocin is released in the body when we feel safe and connected and tells the brain, “Everything is all right.” Dr. Paul Zak has determined that the human brain naturally produces oxytocin during breast-feeding, orgasm, hugs, snuggling, holding hands, partner dance, massage, bodywork, and prayer. 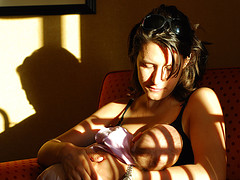 Humans have evolved as hyper-social creatures. Oxytocin helps us navigate our world of complex social relationships by rewarding positive social behavior with feelings of contentment and relaxation. As discovered by Zak and Theodoridou, oxytocin thus motivates a variety of pro-social behaviors such as generosity, compassion, and forgiveness. In other words, its presence in the brain helps us to trust and bond with strangers.

This finding is related to another study orchestrated by Zak, in which he found that oxytocin increases a person’s likelihood to trust strangers and to give them money. In this study, participants were asked to give away a portion of $10 they had been given by researchers. The researchers found that participants who had been dosed with oxytocin were 80% more generous than control group participants. Participants in the oxytocin condition were more trusting of the strangers they encountered. 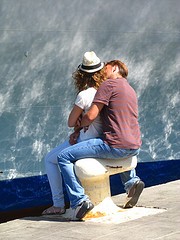 Ditzen and colleagues designed a study using couples and found that those treated with synthetic oxytocin had far lower stress levels. Participating couples were asked to discuss a topic that was stressful and had consistently triggered conflict between them in the past. Then, researchers measured the presence of stress hormones within their bodies. They found that oxytocin improved positive communication between couples and was also related to a decrease in the presence of cortisol, a hormone associated with stress and with our flight-or-fight reflex. According to Grewen, partners with higher naturally occurring oxytocin rates also score higher on measures of partner support.

Learning about oxytocin has given me insight into my interactions with other people. One of my friends often jokes about my poor taste in men. When we are out together and I point out someone mildly attractive or “cute,” she always disagrees and voices how unappealing he is to her. We also have very different personalities. Where I am very affectionate with people I am close to, she is more reserved. Research by Theodoridou and colleagues showed that participants who were given synthetic oxytocin were more likely to perceive strangers as attractive and trustworthy when compared to control participants not dosed with oxytocin. I often wonder if the differences in personality and dating preferences between us may be governed by differences in the levels of oxytocin pumping through our bodies.

One of my favorite oxytocin studies shows that this cuddle hormone affects our ability to encode and recall memories. Guastella and colleagues conducted a study on volunteers and the role of oxytocin in recalling faces with happy, angry, or neutral facial expressions. Previous research by Vuilleumier had shown that human beings have a bias towards recognizing negative facial expressions more than neutral or positive ones, and Surguladze had found a dramatic increase of this effect in populations of depressed people.

Guastella’s research showed that people who received oxytocin countered this tendency and were more likely to recognize and recall happy faces. This result shows that oxytocin can impact how we perceive the world and might allow us to recognize and appreciate positive thoughts and experiences that we normally overlook.

So What Does This Mean to Us?

How can we take greater advantage of naturally occurring oxytocin and maximize its release in our own bodies? Oxytocin is found only in mammals and needs stimulation to be released. According to Wellsphere, studies have revealed that the use of social media can facilitate the release of oxytocin and that even thinking about someone who loves you or someone you deeply care for is enough to activate the release of oxytocin.

However, physical touch stimulates the most potent release of oxytocin. In a TED Talk, Dr. Zak prescribes at least 8 hugs per day to feel happier and more connected, as well as to nurture relationships. According to Zak, research into relationships has shown that higher oxytocin levels are associated with improved heart health, especially in women. Furthermore, after only 20 seconds of hugging a romantic partner, one can achieve a spike in oxytocin levels, as well as a decrease in blood pressure, heart rate, and cortisol levels. So do yourself a favor—go hug someone!

Zak, P. (2012). The Moral Molecule: The Source of Love and Prosperity. Dutton Adult.

The Power of Habit (Book Review)

I’m aware of the research that oxytocin increases gloating and envy. These studies are conducted with synthetic oxytocin. This article encourages getting it naturally through human interaction. I haven’t seen any research that shows these behaviors from people high on naturally released oxytocin, have you?

Great article! As a doula I find this information to be so necessary to expectant mothers. There’s no substitute to this natural high and the power of this hormone – regardless of what the medical professionals say.

Emiliya,
Love the article and your research. I’ve believed in hugging for years, but never knew the scientific rationale behind it. I studied family therapy ages ago and remember that Virginia Satir posited that we needed 8 hugs a day to survive and 12 to grow. Prior to entering corporate America I was a consummate hugger, but once in a corporate environment, they drilled it out of me.
Have they done studies on unwanted hugs? What happens to those who are not as “touchy” as others but are forced to hug? Just a thought. Thanks again for the article.
Scott

Emiliya – true – but then you have to discount many of the studies you quote. The point I’m trying to make is everything in moderation.

And scott raises another important point – perhaps hugging doesn’t work for some people.

Thanks for the good article, Emiliya! I went across the research on oxytocin and trust the other day too and was quite impressed that some hormone can make people kinder. Your summary of the benefits of oxytocin is more comprehensive. The biology of hugs is especially inspiring!

Loved this. It reminds me of Gottman’s research as well as Leo Buscaglia, the hugger guy. Many thanks. I am grateful for the addition of synthetic vs natural, oxytocin, too. My husband now calls me over to give me hugs. What fun!

Great article, Emiliya. You got me thinking about a possible connection between oxytocin secretion and Reiki practice, which anecdotally facilitates rapport and bonding. A number of small studies have linked Reiki practice with improved heart rate and blood pressure (also associated with oxytocin), and one study we did at Yale showed improved heart rate variability. How would one research whether Reiki practice stimulates oxytocin secretion? Is oxytocin only measured through blood work? Thank you!

Hi Pamela, I’ve found mixed research on whether or not oxytocin can be measured through saliva. For a long time research shows that it wasn’t an adequate measure, but then some say it is. Blood work is definitely the most widely used. I would hypothesize that oxytocin levels would be elevated based on the degree to which a person felt safe with and trusting of the practitioner. There are many variables to consider here, since the safety can be based on the space held for the receiver as well. Feel free to call me if you want to chat more about it! (212) F-L-O-U-R-I-S-H.

Thanks so much, Emiliya, I will call. What is striking about Reiki practice is that people feel an enhanced sense of safety and bonding even with a practitioner they don’t know. One small study documented this qualitatively, but it would be great to have a quantitative measure and possible mechanism of action.

Thanks Emiliya for the research based article. I’ve been doing my own ‘research’ by exploring a South American system called Biodanza. Lots of hugs, contact, and movement to music I’d say not only has lowered my stress levels but increased my positive outlook on life and connection with others. Nice to know there is serious research being done on something so simple and enjoyable as giving a hug. Cheers