Stop Being So Serious… No, I’m Serious!

When Did I Become Serious? 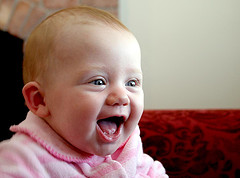 Something happens to many people when they hit adulthood. Life becomes serious. It loses that lightness and freedom it had during childhood. It is a choice (conscious or unconscious) that adults make based on how they interpret what happens to them and the actions they take. Laughter is a powerful way to bring that lightness of being back into one’s life.

My client came into the office. He had a hard week and was feeling pretty depressed. As our coaching session began, his energy shifted, he got more centered and he started to feel a little better. In came Buddy, a 9.5 pound Domestic Short Hair Black Tuxedo Cat with an affinity for paper balls and slight repugnance for catnip.  Buddy planted his rump on my client’s lap and his paws on his chest. My client lightened up, and began to smile. The cuteness was hard to bear, and he burst into laughter as Buddy commenced his mid-afternoon cleaning, taking extra care between his toes. 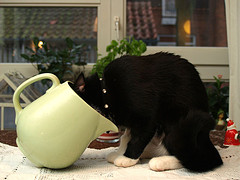 In just a few minutes, my client mood had "done a 180." (We’re considering putting Buddy on the payroll). There are numerous studies listing the health benefits of interactions with pets , however you can experience the benefits my client got, without the need to add another member to your family.

Buddy enabled my client to laugh a little. He came in taking himself extremely seriously. Not to say that the state of his reality was not serious business, but as Barbara Fredrickson has taught us, it can be hard to be creative and think outside the box with regard to career changes when you are in a negative rut. Buddy helped jolt him out of his woes, long enough for us to come up with action steps to support him in his journey. The benefit of laughter has been well documented and is great news for people with pet allergies.

The touted health benefits of laughter have increased dramatically over the years: we’ve all heard “laughter is the best medicine.” Whether or not it is the “best” is questionable. It is difficult to isolate laughter as the sole originator of these benefits (Martin, 2001). However research shows laughter’s positive effect on:

Am I Laughing Or Just Having a Great Time?

Martin points out that humor and laughter are different, and a few studies have showed contradictory correlations between humor and longevity and blood pressure.

A recent study showed that watching a funny film decreased cortisol, adrenaline and DOPAC, before, during and after watching the film. This means that simply anticipating something funny happening can decrease your experience of stress. 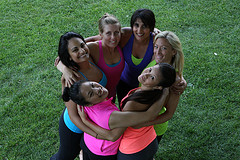 Laughter Yoga is a powerful movement where people all over the world are congregating to laugh and play together. Dr. Madan Kataria lists 10 Reasons for Doing Laughter Yoga [1]:

Laughter yoga started in 1995 and has since spread to over 6,000 laughter clubs in over 60 countries [2]. In laughter yoga, people don’t tell jokes. They don’t play reruns of I Love Lucy , but they sure have fun. They laugh and do laughter exercises. They make sounds like “Ho Ho Ha Ha Ha,” laugh like three-year-olds and eighty-year-olds. They pretend to be have hysterical conversations on their cell phones, and greet each other as long-lost friends with laughter. In essence, they are playing.

Here are 10 Benefits of Play for Adults by Marianne St. Clair:

How Does Laughter Work?

It is unclear what the magic formula is for why laughter works the way it does. Rod Martin (2002), psychologist and laughter specialist from the University of Western Ontario, suggests four possibilities:

There is no stronger recommendation I can make to adults in how to increase their happiness then learning to not take themselves so seriously. Adding more play, joy and laughter into one’s life doesn’t mean you can’t function, pay your bills, or care for your family.

Laughter is an expression of joy. It’s a universal and sacred expression that is the same in every language. My laughter yoga trainer challenged us to "laugh for no reason" everyday. I challenge you to do the same. You’re looking at this computer screen right now… laugh out loud. Your colleagues in the office will think you’re reading a funny e-mail. Go ahead give it a try! Bring some lightness into your life.

McClelland, D.C., & Cheriff, A.D. (1997). The immunoenhancing effects of humor on secretory IgA and resistance to respiratory infections. Psychology and Health, 12, 329-344.

Hi Emilya:
what a great article! I have become a certified laughter yoga leader and have found it to have a profound effect on my own well-being and happiness. As a student of yours, I always learn from you and in this case, could not agree more. Find a laughter yoga club near you at http://www.laughangeles.com or you can come and laugh in Tenafly with me. Check out my website at http://www.laughonpurpose.com for events.
Sheryl

Dr. Kataria didn’t have references for the list in the training manual. Some of them are clearly subjective and experiential, i.e. what is lightness? Others are backed by the studies I’ve listed in the references.

I suspect one of the reasons laughter yoga works is that it changes the way you breathe and activates the calming response (see https://positivepsychologynews.com/news/guest-author/200905121912)

The calming response might be the pathway fo all the health benefits.

I teach a very simple technique that involves breathing slowly and deeply and then imagining that you are smiling. Sort of like “inner laughter yoga”. The advantage of this technique is that its doable anywhere – laughing can be inappropriate at times.

I sometimes feel pos psych can be accused of irony deficit disorder, so anything focused on the importance of humor
is music to my ears. However, there ere a few presenters (posters) on humor at IPPA this weekend. It is a very important, and underemphasized part of the discipline, imo. Thanks for your great work!

This article was great! I really enjoyed reading it. I was hoping you could tell me a little more about Laughter Yoga. I had never heard of such a thing. How did Laughter Yoga get started?