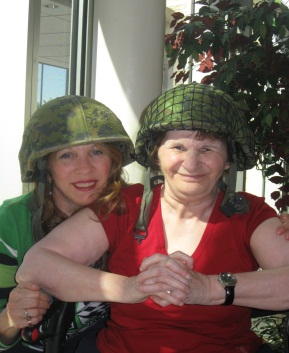 Diana Boufford BSW, RSW, is a social worker employed in private practice and through a hospital in Windsor Ontario Canada. She has been working in psycho-geriatrics for nearly 15 years. She is now working in the hospital's Problem Gambling Service. This gives her opportunities to employ her clinical skills and interests in positive psychology in the course of individual, familial, and residential counselling around addictions. Diana's articles for PositivePsychologyNews.com are here.

Recently at the 2nd biennial conference of the Canadian Positive Psychology Association in Ottawa Ontario, I attended a preconference workshop with Dr. Tayyab Rashid on Positive Psychotherapy. During this workshop, he proposed an exercise in which we closed our eyes and engaged in a meditative practice to envision a time in our lives when we had some kind of challenge and managed to overcome it in a positive way.

As I closed my eyes, it was a bit challenging to choose one event because there have been many in my life. I’m sure that’s no different from anyone else’s experience. Within moments, my mind came to rest on a pleasant memory regarding my mother. My relationship with her had always been somewhat strained.

I recalled a time when I was about 35 years old. I’d been in counseling on and off for about seven years focusing on resolving various challenges in my life, including my relationship with Mom. I was learning about assertiveness, personal boundaries, and expressing my thoughts and feelings in healthier ways instead of being reactive and lashing out in anger or fear or shame as I had become accustomed to doing when I felt threatened. At this point in my life I had made a commitment to work through my mother issues in order to create a healthier and happier relationship with her.

As I sat in this quiet room in Ottawa, with Dr. Rashid and 20 other workshop participants, my eyes closed, my breathing regulated to a slow easy pace, my mind drifted back to a memory. The phone was ringing . . .

My mother was calling me to ask me to do something for her. At that time in my life I was a newly single parent raising two young children and going to university full-time to become a social worker. So needless to say I was very, very busy. I really didn’t have time, nor did I want to do whatever it was that she was requesting. It wasn’t anything really important, and either she could do it for herself, or one of my siblings could. I was taking care of the kids and studying along with a plethora of other household duties that a single parent must contend with.

I then braced myself for the litany that would typically ensue as a result of my refusing to comply with her wishes. “You are selfish!” and “You think of no one but yourself!” and “You are just like your father!” That was never a good thing in her book. They had been divorced for many years, and she still harbored a great deal of resentment toward him. I typically reacted in anger, fear, and shame whenever mom told me how selfish and self-centered I was, and how I was like my father.

This time was different though. For the first time I didn’t have that emotional attachment to what she was saying. I didn’t buy into her beliefs or accusations, and I was really surprised. What happened instead was that I felt nothing but peace. That was very interesting. As I looked at it I realized with a flash of insight that this had been a pattern my mother had used all of my life. This communication dynamic was a way to manipulate us kids into doing what she wanted us to do. The clarity of that awareness was like the clouds parting and heaven opening up with celestial music and the angels singing Hallelujah! Not really, but that’s what I imagined. I was overcome with an awareness of the way her statements influenced me all my life. 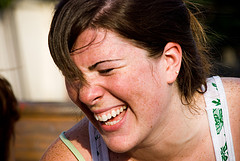 I started laughing! I wasn’t laughing at her. I was just laughing at the wonder of it all and how I couldn’t believe I hadn’t seen this sooner. Mom went really quiet. Then she said with a really harsh voice “What are you laughing at?”

I was still giggling when I said “Oh my God, Mom! I’m just seeing this for the very first time! You have been using this as a manipulation for me and my sibs all our lives. You know you are manipulating me by getting me angry and telling me how selfish and self-centered I am. You try to make me feel guilty to get me to do what you want me to do!”

Mom went really quiet again. I thought, “Oh boy here it comes. She is going to get really mad at me.”

Then she started laughing! I couldn’t believe what I was hearing. I just waited. Then she said, “Well it took you long enough.”

Diana and her mother, playfully

I think that conversation was the birthplace of an adult relationship between my mother and me. No longer did she treat me like I was a little girl. She seemed to have a new respect for me as a grown woman. As she started relating to me as a grownup, I started being kinder and more patient and gentler with her as well. I could see her as an adult and single parent who had had her own challenges to contend with under some very trying circumstances.

I shared this story in Dr. Rashid’s workshop. He noted that I was able to employ the strength of playfulness and humor to address this challenging problem with my mother. That caused me to take another look at this character strength in Character Strengths and Virtues. Peterson and Seligman cite Mark Twain, who wrote in 1897, “Humor is the great thing … the saving thing after all. The minute it crops up, all our hardnesses yield, all our irritations and resentments flit away, and a sunny spirit takes their place.”

Peterson and Seligman go on to say, “Humor may be easier to recognize than to define, but among its current meanings are (a) the playful recognition, enjoyment, and/or creation of incongruity; (b) a composed and cheerful view on adversity that allows one to see its light side and thereby sustain a good mood; and (c) the ability to make others smile or laugh.” (p. 584). My experience with my mother had all three ingredients.

German professor of English, Wolfgang Schmidt-Hidding, studied humor and wit. He concluded that humor . . . “denotes a cognitive-affective style of dealing with adverse situations by finding them amusing. Humor . . . reflects a sympathetic heart as opposed to a superior spirit (as is wit), haughtiness (as is ridicule), or vitality (as is fun).”

I have to agree that a lighthearted, playful attitude and a sympathetic heart is much more conducive to creating a healthy and happy relationship not only with my mother, but with everyone around me.

Editor’s Note: Diana spoke during the conference as part of a symposium titled The Intersection of Positive Psychology, Psychogeriatrics, and Geriatric Care. Her slides as well as those of other speakers can be found among the Speaker Presentation Slides. She was discussing Comprehensive Geriatric Fitness, a topic that she has described in a series of articles on Positive Psychology News.

Proyer, R. & Ruch, W. (2011). The virtuousness of adult playfulness: the relation of playfulness with strengths of character. Psychology of Well-Being: Theory, Research and Practice, 1:4.

Twain, M. (1897). What Paul Bourget thinks of us. In How to tell a story and other essays. New York: Harper and Brothers.

The Science of Happiness – Tal Ben-Shahar

Thanks for one of the best strengths stories ever. Talk about courage as well as humor.

My best friend, Cheryl, also had one of the most toxic mothers ever. I feel blessed to have been raised by a terrific, quiet mom. I would run down the street and could hear Cheryl’s Mom blasting her dad or her. It was a great conversation with my Mom that helped me understand and empathize. And realize how lucky I was that her mom was nice to me. And that I was fortunate to have a great Mom, and one who Cheryl could talk with any time, too. Look for the good, especially the fun re-framing good.

Your Mom had her demons, and you developed unreal courage to decide what she said about you was none of YOUR business. How empowering. Your kindness strength was morphed when you started being kind to yourself and no longer cow-tow’ed to your mom.

Big congrats for being an super inspiring role model to others whose parents are emotional blackmailers or energy vampires as Judith Orloff would say.

What a great lesson you used strapping on your humor super cape. Great writing. here, too.

what a great story Diana.