Never Before in Philadelphia 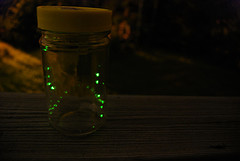 Fireflies in a Jar

While walking to join a few friends yesterday evening at dusk, I passed through a lush green park in the center of Philadelphia. I was lost in my own head, contemplating the many interesting topics presented at the First World Congress on Positive Psychology of the International Positive Psychology Association (IPPA) this past weekend. As I stepped softly through the grass in the approaching darkness of the evening sky, a light suddenly caught my eye. Waist-level beside me, hovering in the summer air, was a firefly. Its body flashed, emitting a gorgeous amber light. It had been many years since I had seen one of these beautiful beetles and never before in Philadelphia. 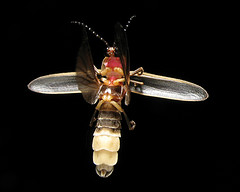 I was instantly reminded of innocent and perfect childhood summers, laughing while running through my backyard hand-in-hand with friends and girls I had crushes on, swimming in a sea of hundreds of fireflies that would appear for only a few weeks every June, and only for a short period at dusk. I nearly gasped as these memories came flooding back. As I stopped to savor the moment, I saw another, then two more behind me, and five others to my right. They were all around me creating an incredible pattern of softly glowing light. Fireflies use a process of bioluminescence to attract mates and can usually be found in packs like this one. I began to wonder how one firefly emitting its lone light and slowly attracting others turns into the radiating sea of beauty in my childhood memories.

The Lucifer Effect and Fireflies

The IPPA Congress this past weekend featured endless fascinating topics including passion, courage, the mind-body connection, and meaning. One of my favorite talks was given by Stanford psychologist Phil Zimbardo who discussed the research presented in his book The Lucifer Effect: Understanding How Good People Turn Evil . Using images from his famous Stanford prison experiment and real-world examples including the horrific treatment of prisoners at Abu Ghraib, Zimbardo explained the power of situational influences that push otherwise good people to do bad things. To say the presentation was disturbing is an understatement. Audience members around covered their eyes and groaned in protest. Weren’t we gathered to discuss the best of human qualities, not the worst?

But just as fireflies use an enzyme luciferase to create their glow, Zimbardo believes there may a positive flip side to the Lucifer effect. His new research is focused on the processes involved when a person does the right thing despite the situational influences. He showed video of New York subway hero Wesley Autrey and photos of the famous Tank Man of Tiananmen Square and Lin Hao , the 9-year-old Chinese boy who rescued his classmates from the earthquake rubble of his school claiming, “I was hall monitor, it was my job to look after my classmates.” The audience wiped tears from their eyes. We all recognize heroes like these when we see them: individuals able to express the highest human strengths in times of crisis. Zimbardo calls this heroic imagination and stresses that the qualities of a hero must exist before the opportunity to express them is presented. We can all be heroes-in-waiting, ready to shine our light when the situation demands it.

While heroes are archetypes of a VIA strength due to a combination of internal forces, what are the external social effects of a heroic deed? Walking through the park, the light from the initial firefly caught my attention immediately. And when we view an heroic act, we are struck with awe and elevation that encourages us to look more intently (see Kathryn Britton’s Awe and Elevation ). The experience of awe produces positive emotions that prepare us to broaden and build our resources, by focusing our attention on the heroic deed and motivating us to acquire the same abilities. As Kathryn points out, viewing a virtuous deed encourages people to act more virtuously themselves.

Marcial Losada’s research on high-performance teams is often cited for the 3:1 positivity to negativity ratio findings which are both fascinating and powerful. Losada observes this ratio as a result of the overall connectedness of the team. The more that individuals trust and communicate with each other, the more easily information can flow in the social system. When connectedness is high, information passing through a social group resembles fluid dynamics. Adaptations proliferate throughout the system and change can occur quickly. When connectedness and trust are very high, heroic deed begets heroic deed and, as the tonnage of character strength increases in the population, large-scale social change becomes possible. David Cooperrider received a rousing standing ovation at the IPPA Congress for his talk on Appreciative Inquiry that outlined a mission for the study and creation of positive institutions. His talk highlighted three key components of a strengths-based approach to organizational and institutional change.

Positive institutions, according to this breakdown, should grow strengths in individuals, encourage the sharing and synergy of strengths across the institution, and spread the collective strength to others. Cooperrider expressed a simple point that when our strengths connect, anything is possible. He told stories of business leaders sitting around tables with other business leaders pounding their fists on the table in reaction to the sustainable and inspiring practices of other companies. When we have access to better options, we usually take them. If we can create well-connected, fluid social systems, we have at our fingertips the capacity of all the collective human strength we can imagine. We can find an heroic solution for any situation.

Many species of firefly exhibit a biological synchronicity in the alignment of their flashing patterns when in large groups. They shine their light together and the result is an incredibly beautiful array of connected luminescence. The current research and practice is beginning to suggest that we work the same way when shining our strengths. As positive psychology continues to grow in both its breadth and its depth, flourishing positive institutions that support wide-scale strengths revolutions will serve as model research subjects and the heroes within them will continue to inspire us all.

Stop Being So Serious… No, I’m Serious!

Hi Derrick,
Great images–verbal and visual! Thanks for offering a balanced view of the conference including Zimbardo’s controversial opening talk. I can’t believe that you managed to mention fireflies, luciferase and Phil Zimbardo in the same paragraph.

Beautifully written and illustrated. Thanks!
Eleanor

Thank you, Derrick!
Your weaving -the ability to integrate so many concepts in to your article – along with the timely reference to fireflies is fantastic!

Our family just enjoyed the flight of the fireflies this past weekend. I will share your insight and encourage them (along with fellow co-workers) to take in the collective glow!

Derrick,
Thank you for helping me at least consider a different perspective on Zimbardo’s talk. I felt at the time that it was as if Martin Seligman had spent 45 minutes talking about learned helplessness — showing lots of pictures of dogs getting shocked — and then at the end said, let me talk for a few minutes about learned optimism. In terms of the peak-end rule, the peak was certainly not positive, and the end was a film about PZ himself rather than the topic of heroism, so the message about learning to be heros-in-waiting isn’t in the center of my mental stage when I think about that talk. Thanks for the chance to widen my point of view.

Wonderful image of fireflies aka lightning bugs. They have been filling my yard in the evenings, resting in the butterfly garden, signalling to each other. They remind me of childhood summers as well.

Derrick – like Kathryn, I thank you for helping me gain another perspective on Zimbardo’s talk. I recall thinking at the time that maybe I had mistakenly entered the wrong ballroom/conference. I’m glad you reminded me of the heros in his talk as my negativity bias caused me to remember the prisoners. Also thanks for the succint write-up on Cooperrider’s talk. His speech was truly uplifting. Margaret
P.S. – glad we had a chance to connect at the conference. Rah-rah here we are again: M-E-R-I-D-E-N

Beautiful, Derrick. Thank you. Don’t forget to poke holes in the cup when you catch them – we got to keep those fireflies ALIVE!

Hi, Derrick-
This is a beautifully written piece. I love the way you connect seemingly unrelated ideas and show how they are naturally integrated. It made me think of anatomy and phys books with acetate overlays. There are many separate parts, then systems, and eventually we can imagine a healthy, living, breathing individual organism. Once those organisms group, new dynamics of flourishing can develop.

Thanks so much for the compliments on the interweaving of concepts. Ever since my introduction to positive psychology, I’ve felt it’s greatest power comes from the synnergy of ideas. Happiness, character, love, and gratitude all seem to posess a magnetic quality, drawing other people in, magnifying their own power, and leading to other positive outcomes. And just because positive psychology studies positive institutions doesn’t mean that it will automatically become one. Research psychologists of all bends run the risk of becoming uncommunicative silos and I think it’s the responsibility of those practicing and disseminating the research to connect the parts for the greatest whole whenever possible.

Whole-heartedly agreed and duly noted! I passed another bunch on my way to the grocery store last night. Magnificent!

“Research psychologists of all bends run the risk of becoming uncommunicative silos and I think it’s the responsibility of those practicing and disseminating the research to connect the parts for the greatest whole whenever possible.”

Love this phrase. I agree; it is extremely valuable when research is connected like this.