The Summer of Self-Acceptance 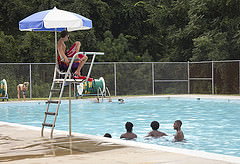 The approaching Memorial Day weekend marks, for us Americans at least, the official start of the summer season. And summer just might be the season of positive psychology. Beautiful, long days that allow for outdoor activities into the late dusk hours. The laughter of children playing baseball in the street. Festivals celebrating everything from art and music to flowers and beer. Summer truly is a time for thriving.

Time to Show Off?

But over the past few weeks, I have consistently seen summer defined most prominently by the media as a time for people to show off their beach bodies. Everywhere you turn there are (well-edited) photos of extremely attractive people with nearly impossible to obtain bodies. And as any psychologist knows, your immediate environment eventually determines how you view the world. After flipping through a magazine and inadvertently seeing an advertisement of shirtless men, I often find myself attempting to rationalize away the well-documented risks of sunbathing in order to get that perfect tan. For many people immersed by these images and advertisements, summer is becoming less and less about playfulness and relaxation and more about anxiety and stress.

This is just one example of what I think has become an epidemic of sorts in our culture: the death of self-acceptance. By self-acceptance, I do not mean a passive ability to congratulate and praise oneself unconditionally. Instead, a positive psychology version of self-acceptance should be defined as a positive self-regard or a general sense of happiness or satisfaction in oneself. It might also include the pursuit of self-knowledge in an accepting and positive manner. Self-acceptance should seek to limit one’s need to seek approval and acceptance from external sources in favor of internal sources within one’s control.

I was recently talking to a friend who spent a weekend away with girlfriends pampering themselves and shopping, something she does infrequently. She admitted to having a great time and that she had bought a few outfits that made her feel great. She could not wait to get home and show her boyfriend. When she did, his reaction was apathetic and she was devastated. In that moment, she had placed a large portion of her fragile self-worth in his hands, and he – innocent and unknowing – dropped it. She since has decided to return most of the clothing that no longer makes her feel great.

Had she invested a bit more energy in fostering and securing the positive feelings she had when she initially went shopping – perhaps through gratitude and journaling – and expected less from her boyfriend, she may have been able to maintain her positive emotions and would have been better equipped to bounce back from her boyfriend’s reaction. This, in many ways, exemplifies what Karen Reivich and Andrew Shatté refer to as resilience. It seems to me that self-acceptance serves as a concept positive psychology would do well to investigate further. But the case may not be that simple.

Self-acceptance, at its essence, represents a satisfaction with the status quo. But if someone approves of his current condition, what motivation does he have to change? Is not positive psychology about – to a large degree – self-improvement? Why exert effort to improve when everything is acceptable?

Summer time…
These questions remind me of a recent conversation I had with two good friends. In discussing popular concepts of self-improvement as taught by The Secret and other similar books, we lamented the message that everything in the universe is under your control if you simply believe that it is. If we consider a continuum of man’s ability to control his world from zero to ten (zero being no control whatsoever, ten being absolute control), these teachings fall very close to ten. In this doctrine, you ought not to strive for acceptance of any status quo, since you always have the ability to call into being a better world. You want to look like those models in the Calvin Klein advertisement? You got it. This, clearly, is nonsense. For comparison’s sake, I immediately considered the lifestyle of a Buddhist monk in whom meditation cultivates full acceptance of the inability to control anything external. This was the best example I could conjure for someone who believed himself to be close to zero on the continuum. But something about this position did not sit right either. We may not have absolute control over our worlds, but we certainly have some! How, then, do we reconcile the concepts of self-acceptance and those of self-improvement and growth?

What Can You Control?

An answer that I can accept was put forth by one of my friends. He suggested that our beliefs about how much control we have may not matter. Humans are likely to have a level of control somewhere between zero and ten, and regardless of what that may be, perhaps what matters most is an individual’s ability to make use of the power she does have. Knowing that a new outfit makes you feel great and acknowledging that you have control over that should be a signal to exert effort and attention here. Similarly, you should accept that you cannot control your boyfriend’s reaction to your new found happiness. By placing your self-worth in the hands of someone or something you cannot control, you take a risk. Perhaps self-acceptance ought to revolve around knowing what you can change and what you cannot change. (And, lucky for us, Martin Seligman has written a good book on this very subject).

Once you know what things are in your control, you can decide whether or not you want to make efforts to improve yourself in those arenas. Hopefully, positive psychology can help. Accepting those things about yourself that you cannot change may keep you free from some anxiety and stress. And when you are uncertain about how much change you can effect, be optimistic.

I hope that as you sit on the beach over the coming months, you find ways to add self-acceptance rituals or exercises to your positive psychology arsenal. And not only self-acceptance, but self-gratitude, self-pride and self-love. Nathaniel Branden was once quoted as saying, “People who do not experience self-love have little or no capacity to love others.” Perhaps by increasing your self-acceptance, you might increase your acceptance of others, becoming more intimate with family and friends as you relax and play together during long, lazy evenings.

Isn’t that what summer is all about?

Do Not Take the Contemplative Panic!

How You Tell the Story of Your Life

At what point do we decide to say, “Enough is enough” and simply allow ourselves the permission to enjoy life without always trying to live up to the standards that society has placed upon us and in turn, have placed upon ourselves?

Nice job Derrick! This is a great point of focus! 🙂

Great Article. In my work with people in recovery from addictions the issues of control arises consistently.
The well worn prayer comes to mind.

Each person then contemplates what they can do and then is encouraged to gain acceptance around the rest. The outcome then is a combination of action and peace of mind (serenity and acceptance).

Nice article Derrick, thanks for this – I think you get to the heart of much. I am reminded of Ghandi’s comment that ‘no one can rob you of your self-respect unless you give it to them’.
Best wishes
Angus

Thanks for the reference to Marty’s book and for reminding me about the importance of accepting what is… something we seem to need to remember often.