Roughly 30 million Americans do it every week. And I hate to admit being one of them.

But watching American Idol has become a habit for many people as the show has grown into an icon of modern culture. Why do so many people watch? Perhaps they tune in to hear the judges share uplifting aphorisms grounded in positive psychology (insert sarcastically-raised eyebrows here). Or perhaps, I like to think, there’s just something special about music that we connect with emotionally unlike anything else.

What Does Music Do For Us?

Great music energizes us, inspires us, and brings us together. Some music makes us want to dance while other songs encourage us into pensive sadness. Even terrible music captivates us with laughter and shock, as proven by contestants on the initial Idol audition episodes. Music is a ubiquitous feature of celebrations and rituals throughout the world and history.

Music adds something to our lives. Now that spring is here, take a walk through your favorite nature trail or outdoor area soon—do it once in silence and once listening to, for example, Vivaldi’s “Spring” from The Four Seasons. It becomes a totally different experience. We all have favorite songs and know lyrics and melodies that bring back robust memories. Fred Bryant and his colleagues have shown that reminiscing on past positive events is an effective method of savoring that increases happiness and life enjoyment. Music that takes us back can be a powerful positive psychology tool.

A few entrepreneurs have even grown rich off the commonly believed Mozart effect—the hypothesis that listening to Mozart compositions makes us smarter. But this effect has been shown as an artifact of the positive mood induced by the music [1], and you’ll perform just as well on intelligence tests after hearing a classic rock song you really enjoy. The news that there was nothing special about Mozart’s music in particular seemed to dishearten people. I couldn’t understand this. We know that there exists a plenitude of benefits to experiencing positive emotions, and music has been shown as one fairly reliable pathway to feel good. So why don’t we use music to increase our moods on a more consistent basis?

A few weeks ago, I found myself in the midst of a healthy debate over iPods. I don’t have one and doubt I ever will, and my friend couldn’t understand this. As far as he was concerned, iPods are currently the best technology in the music world. For years, I’ve been carrying around an oversized, overused minidisc player. Minidiscs are essentially small CD’s that were introduced in the early 1990’s by Sony and became fairly popular in Japan. A minidisc holds the same amount of music as an average CD at approximately 74 minutes.

When I began arguing for my minidiscs, I was already sure that Barry Schwartz’s paradox of choice was the driving force behind my anti-iPod sentiments. I knew if I could carry with me 1,200 of my favorite songs, I’d constantly be looking for the perfect song and skipping songs after only 30 seconds of listening. This would limit any real chance I had at genuine savoring. Carrying only 20 or so songs on a minidisc eliminated this problem. 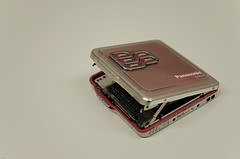 Prefer my minidisc
As I explained this to my friend, however, I began to see a deeper reasoning for my minidisc attachment. Not only do I carry just one minidisc with me at a given moment, but I usually invest serious time in making a disc and will listen to it for a few weeks, if not months. During that time, I’ll make a conscious effort to listen most often during positive emotional peaks or times when I feel particularly inspired or elevated. And after a period of time, those 20 songs will feel old to me and I’ll create an entirely new disc for the next few weeks, rarely revisiting the old one. But it is those rare revisits that are the key. By listening to the same 20 songs over and over for a few weeks during my best and most positive moments, I deeply associate the events, emotions, and experiences of that time period to those songs. And now if I pop a disc labeled “Fall 2001” into my oversized player, I am instantly taken back to a rich, vivid series of memories of all the things that mattered to me at that time. A musical diary, if you will.

My minidisc routine, albeit esoteric and quirky, brings music into my life in a powerful way that helps me to build intense positive emotions. I suppose the message I wish to convey in this post is that music can be an incredibly powerful catalyst in enhancing the quality of our lives. I hope that you have your own esoteric and quirky rituals around music and that you even have a few guilty pleasure songs. I hope you have special songs that symbolize bonds you have with special people in your life. And I hope you have found a few songs that truly celebrate who you are.

As for American Idol‘s ability to increase viewers’ positive affect? You’ll just have to tune in and decide for yourself.

Money Will Never Make You Happy

Hi Derrick,
Neat new positive intervention (positive exercise) – to focus on a certain set of 20-30 songs and just enjoy them for a significant time. (Plus then you always have your history too of what you were listening to and enjoying at different parts of your life – Neat.)
I’m a big fan of your title: Mozart and Minidisks.
Best,
S.

I didn’t know about the new information disputing the “Mozart” part of the “Mozart effect.” Thanks for telling me- -it makes total sense to me and now I won’t feel guilty when I read something about the Mozart effect and remember that I didn’t fill my kids’ lives with Mozart. They certainly were filled with lots of great music.

I love your point about your minidiscs. And whatever works for you…

I have to say, though, I am an ipod fanatic– I think it is the single best invention of the past 100 years. If you ever decide to try it, you can do with “play lists” what you do with minidiscs– and in less time. I love your way of savoring by connecting specific music with specific time periods.
Christine

Neat, Derrick! I like the idea of being able to associate with a past time through music. Wonder if that’s why oldies stations stayed around so long as those of us in the baby boom generation aged? I note they seem to be going away now, but don’t know why. Anyway, I’ve always thought it funny that not only my two boys, but their friends also know most of the same oldies, many of which I enjoy.

If you’re looking for some references on the so-called Mozart Effect, have a read of the following articles in the order they are listed, and they will give you a sense of the chronology: