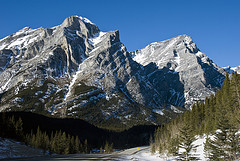 Every few days or so, when I need a break from the world, I go to my sanctuary on top of a remote mountain in the Canadian Rockies.

Well, at least my brain is convinced that I do.

During my junior year as a varsity collegiate rower in Boston, my coach – concerned about some of our upcoming races against national championship contenders – introduced us to a variety of sports psychology techniques. We read books written by Olympic oarsmen, committed our specific season goals to paper, and even tried yoga. But the thing I remember most about that season is creating my sanctuary.

One cold February morning, our team gathered in the meeting room overlooking the frozen Charles River as our coach guided us through the process. He told us to close our eyes and visualize ourselves in a place – either imaginary or real – that brought us feelings of confidence and calm. Given the liberties of free association, I instantly saw myself standing atop a mountain on a crisp, sunny day in Banff National Park in Alberta, Canada. I had never been there, but I had seen pictures and the place inspired me (for reference, search for Moraine Lake on Google image). We sat for about eight sessions over a period of a few weeks developing the details in our visualization. Adding sounds, smells, and tactile sensations made it even more vivid. When we began racing that spring, I would visualize myself feeling confident and powerful among those mountaintops every time I sat on the starting line, poised and waiting for the start gun. That season was fantastic.

Visualization is powerful stuff. According to Harvard psychologist Stephen Kosslyn and his colleagues, mental imagery was a foundation of psychology for Wilhelm Wundt and William James but was overshadowed as behaviorism took control. The last few decades have reignited an interest in mental processes. Recent research in cognitive neuroscience suggests that areas of the brain activated while looking at an object (an apple, for instance) significantly resemble those activated while imagining the object. It is no surprise, then, that visualizing an event or situation can seriously influence how we handle the real thing. Many forms of anxiety and depression take their toll through the negative imaginary ruminations they encourage.

Research by Shelley Taylor of UCLA and her colleagues, however, suggests that visualization can do positive work as well. Mental simulations, as Taylor calls them, can assist in problem-solving, enhance positive emotions, and increase the perception of the likelihood of an event. If you hope to be lounging on a Caribbean beach next month, visualizing it might help you to believe it could really happen. But imagination alone won’t get you there. A study by Taylor and Lien Pham asked students to visualize getting an A on a midterm exam. One group was asked to focus on the outcome – actually receiving an A – while another group was guided to focus on the process and studying involved. A control group was asked to simply monitor their study habits. The group that visualized the process received the highest grades, and the outcome-focused group actually scored lower than the control group. You better start imagining yourself asking for the time off work if you want that Caribbean tan.

Picturing myself on those mountains as I sat on the starting line was so powerful because my sanctuary was perfectly aligned with my values in those moments. Confidence and calm were all I wanted from the first stroke of my race to the finish. Edwin Locke of the University of Maryland argues that moving towards one’s values is a necessary element of goal achievement and, therefore, happiness. All individuals, he claims, have a unique values hierarchy that distinguishes their motivations and actions. When we are clear on how this values hierarchy looks, we are better equipped to take conscious steps towards our own happiness. But how do we even begin to approach such daunting topics as our own values hierarchy?

Psychologist Laura King has conducted research on the benefits of what she terms Best Possible Self journaling. Her instructions to participants read:

Think about your life in the future. Imagine that everything has gone as well as it possibly could. You have worked hard and succeeded at accomplishing all of your life goals. Think of this as the realization of all your life dreams. Now, write about what you imagined.[1]

The research subjects wrote for 20 minutes for four consecutive days. King has found that, compared to groups that kept journals disclosing traumatic events, the Best Possible Self journal writers experienced significant benefits to mood and physical health, even months after the writing. Clearly, this is a valuable exercise. But a point that King does not seem to stress as much is the ability of these Best Possible Self journals to extract people’s inherent values. Sitting down to think honestly and deeply about where you want to be in ten, twenty, or even fifty years really gets you thinking about what you value in life. I think many of us, myself included, do not do this often enough.

Spending time with King’s journaling exercise to become clear about what we value and then using visualization techniques to help us realize those values could potentially be a powerful approach towards happiness. Be prepared to reassess yourself on a regular basis, however, since King suggests that we often revise our values as a result of the trials and tribulations of life.

My sanctuary was originally designed to give me a place to cultivate what I valued as a competitive athlete. Since I find myself valuing the same things today, I go back often.

I have not yet been to Banff National Park, but I already know how I’ll feel when I do visit someday.

Taylor, S. (2011). Envisioning the future and self-regulation. In M. Bar (Ed.), Predictions in the Brain: Using Our Past to Generate a Future. Oxford University Press. (Added later)

This is a beautifully-written article and a great reminder of the value of visualizing. Thanks for the sources you offer in the article– you’ve included some information I look forward to learning more about.

Thanks for making me smarter… I will try this visualizing stuff asap.

Derrick, What a neat neat article. Throughout the day, I find myself imagining the Moraine Lake (from the images in your article!) Also, thank you so much for the Kosslyn research. I know that Dan Gilbert describes this visualization research, and I’ve always thought it to be so powerful. Did not know about Taylor/Pham research either – the process of the A! And am a big fan of Locke’s and King’s work. Thank you. And, on top of all the interesting research, thanks for the wow images of Moraine Lake. S.

Very engaging article, Derrick. Visualization is also extremely important in meditation/yoga. In all of my yoga classes, not once has the instructor mentioned visualization when we were involved in meditative practice, yet I always employ the technique. The instructor merely focused on breathing, and I guess a bit of visualization of our breathing. But to actually visualize a sanctuary, a personal space of calm and serenity, that is what helps me to become centered and facilitate meditative practice.

Looking forward to your next article.

Dear Derrick, I agree, as a Positive Psychologist myself, that this is very powerful stuff and can really center and enliven a person. However, we must bear in mind that for many people who have had problems, just permitting themselves to look into their own future in a positive way is very scary and can provoke a lot of anxiety. What I do in my practice and talk about in my book, THE ENCHANTED SELF, A Positive Therapy, is to help people feel safe to go into the future by finding past elements of themselves that they can take pride in. I help them go backwards in time to find their strengths, interests, coping skills, dreams, passions and even lost potential. Sometimes we have to sift through a dysfunctional past but we always find good news. Then armed with what is most unique to them in positive ways, it is much easier to envision a way of successfully recreating oneself in the future. Looking forward to talking more with you.

😮
Derrick. Visualization was huge in the elementary school I worked at last year on the south side of Chicago. Calmed all of the crazy ones right down and refocused them (briefly, but that 2 minutes was the best 2 minutes of my day!!). Great topic, very well written!! Look forward to reading your future articles!! ~ Amy 🙂

I agree the power of visualization can be underestimated in many areas. This also applies to inducing visualization in others. For example, in a sales situation, try to get the prospect to visualize what it will be like to use your product, or work with your company…

Venus, I agree with you. To co-plan in a sales situation.